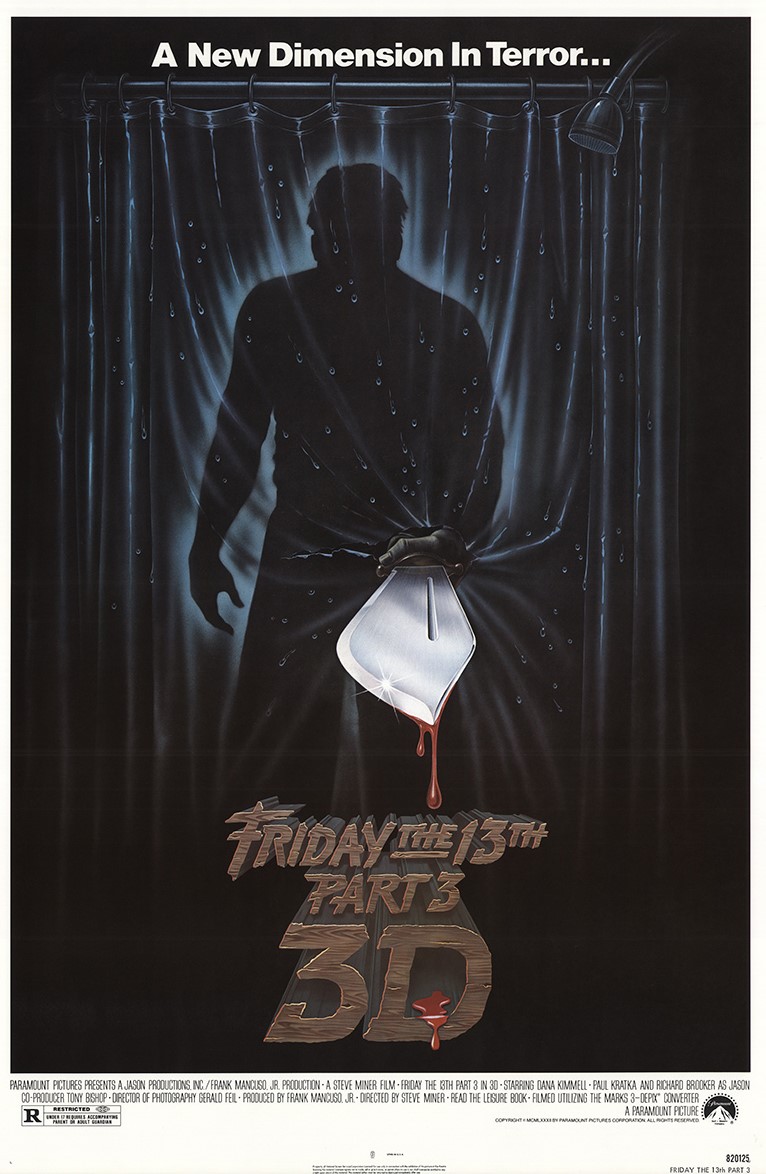 Well that went downhill quickly.
Part 3 opens by reshowing a big chunk of the end of Part 2, but actually has almost nothing to do with the previous movie. A character watches TV and sees Ginny put into the ambulance, but the report is all about how there's a homicidal maniac on the loose (fair enough) and doesn't mention whether or not Paul survived. That's too bad, but I guess it leaves me free to create my own ending to Part 2 and say that Paul survived and chased Jason off. It seems unlikely, but it's also probably the best way to explain Ginny's surviving.
What Part 3 is interested in (outside of super dumb, comin-at-ya 3D effects complete with popping popcorn and a yo-yo) is just having Jason roam the countryside murdering people in overlong sequences before settling into clearing out a bunch of young people on vacation at a farmhouse.
One of them has some history with Jason, though it's nothing from either of the previous films and she remembers very little of it. It's most interesting to me as an explanation that Jason has been active in the area before the events of Part 2. But it's weird, because all the woman remembers is being captured by Jason and dragged off. She blacked out after that. She obviously wasn't murdered, but there's also no mention of her being raped or any other horrible thing that Jason could have done to her. So that supports my theory that even though he's been around all these years, he maybe didn't get a taste for murder until he took his revenge on Alice at the beginning of Part 2.
The other important element in this movie - just from a legend-building standpoint - is that it's the origin of the iconic hockey mask. It's a lame prop used by one of the vacationers to draw attention to himself, so when Jason kills the kid, he takes the mask to replace the sack that got pulled off him in Part 2.
And that's almost all the interest I have in Part 3. The acting is horrible, the dialogue is worse, and I care about none of the characters. It has nothing to do with a summer camp. It's just a random incident with disposable victims. The only other thing worth mentioning is that Jason is apparently killed at the end, so Part 4 will have some explaining to do to undo that.
at October 22, 2020

I guess I like this one for the sheer 80s-ness of it all. And I like the characters, most of them, after having been watching them for so long. But yeah, some of the acting is ... not good. Rick especially stands out to me as not meant for acting. But, cheesiness aside, I enjoy revisiting it. Debbie (hammock girl) is very pretty and has a lot of personality.

I've read a lot of other people's thoughts and it does seem to be a favorite. Maybe I would have enjoyed it more - or at least differently - if I wasn't binging the whole series back to back. I was just so impressed with those first two.