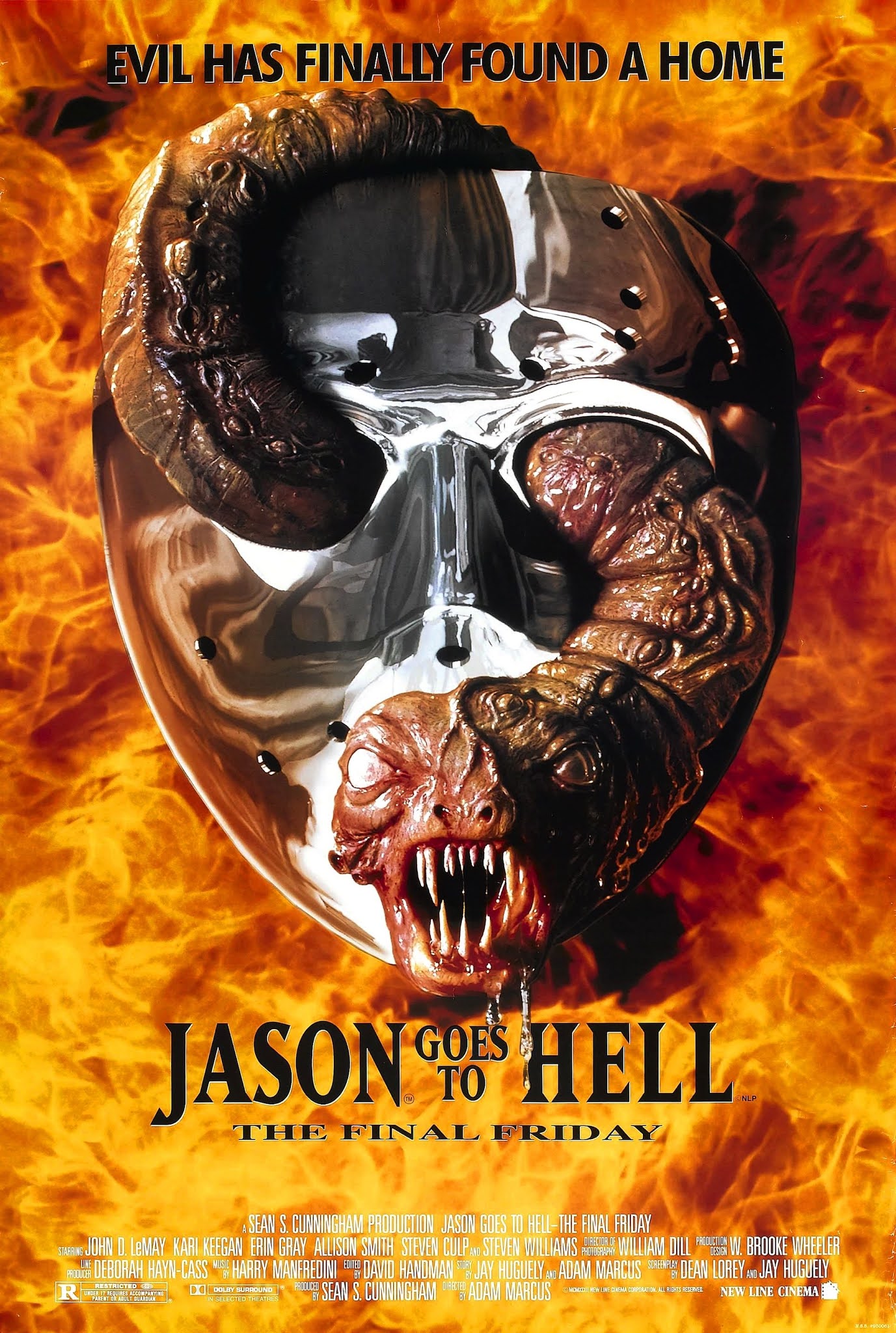 I'm not doing a lot of behind-the-scenes research on these movies, because my curiosity is more about how well they hold together as opposed to the challenges that make that hard. But Jason Goes to Hell so blatantly disregards then end of Jason Takes Manhattan that I got to wondering what was up. Without going into a lot of detail (mostly because I imagine everyone already knows the details way better than I do), Paramount gave up on the series and let New Line take over, but without the Friday the 13th name. Part of getting New Line involved was also about a potential crossover between Jason and New Line's Nightmare on Elm Street series, which of course eventually happened, but I don't wanna get too far ahead of myself.
Jason Goes to Hell makes no mention of Jason's toxic death at the end of Manhattan and instead opens with him back in the woods around Crystal Lake. His entrapment and destruction by a military unit is a great scene that made me wonder why no one had thought of it before. I don't hold that against the previous films; it's just the mark of an excellent idea.
The movie quickly reveals that Jason has been possessed by some kind of demonic spirit (presumably in Jason Lives) which has the ability to jump from body to body, remaking them in Jason's image. And though the film never claims it, it's possible to imagine that this happened in New York and that the Jason who's destroyed at the beginning of this film isn't the same physical body that was disintegrated in Manhattan. That raises some extra questions, but it's the closest I can get to explaining the contradiction.
The reason it raises questions is because Jason Goes to Hell says that these new host bodies aren't able to hold the spirit for long. The spirit wears them out and needs someone related to the original host (ie, Jason), which means that it requires another Voorhees to inhabit. Fortunately, Jason Goes to Hell provides a few.
We find out that Jason has a sister (played, I was happy to see, by Erin Gray) who also has a daughter and grand-daughter. The plot of this film is just the spirit jumping from body to body (and murdering lots of people along the way) in its quest to possess one these relatives.
With these being the rules, my explanation about the spirit's changing bodies between Manhattan and Hell kind of breaks down. The only way I can make it still make sense is if there was another Voorhees that the spirit was able to inhabit after Manhattan and that's who we saw destroyed at the beginning of Hell. It's a crazy stretch, but no less crazy than anything else about these movies.
In spite of these story gymnastics (or maybe because of them), I quite enjoyed Jason Goes to Hell. In addition to the new Voorhees characters (and getting to see the Voorhees' home), there are some other fun, new characters. The father of Erin Gray's grand-daughter is a guy named Steven who looks like a nerd, but ends up being totally badass. I like him much more than Creighton Duke, the bounty hunter he temporarily teams up with.
Duke looks and acts cool, but in a super one-dimensional way. He's a caricature of a movie tough guy and conveniently knows everything anyone needs to know about defeating Jason, with no explanation of how he learned any of it. But he's not in the movie a whole lot. Steven and his girlfriend Jessica get the most attention and that's good.
The film ends with Jason's being magically dragged to Hell. I assume that some demonic force is reclaiming the spirit that's been possessing Jason and these other folks. None of that is explained in the movie, but maybe we'll get some answers in one of the next installments. This one wraps up with a surprising cameo by Freddy Kreuger's hand, which I wasn't prepared for since we have one more movie between this one and Freddy vs. Jason. I have no idea what to expect from Jason X except that it somehow involves his going into space. I'm curious if this Hell mythology will be explored there or delayed until the Freddy meet-up or just ignored and left for viewers to make up on their own. By this point, I mostly suspect it's that last option. 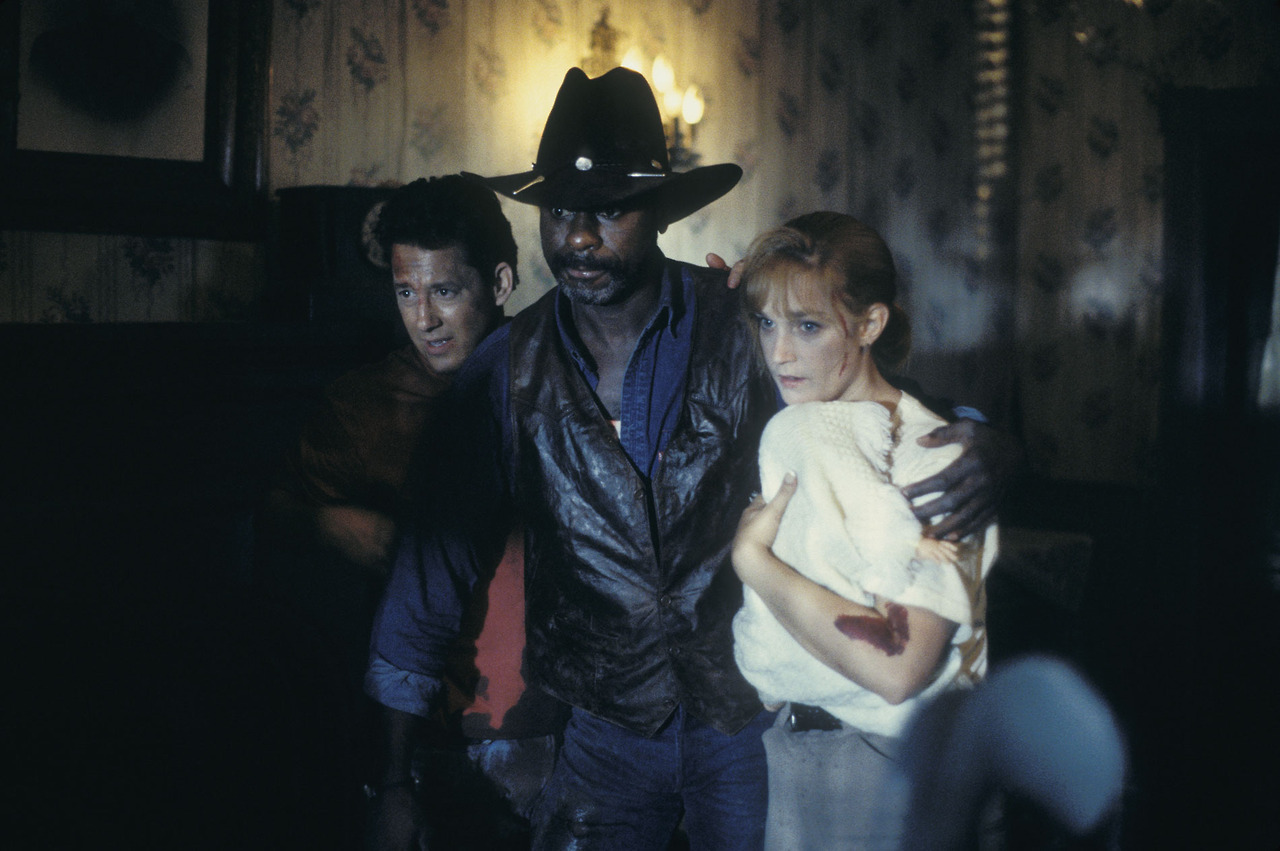 Lots of behind the scenes stuff about the making of this one! As for how long the demonic thing has been running Jason, in the basement, there is a quick glimpse of a crate from an Arctic expedition, alluding to some long frozen and dormant creature being let loose in the Voorhees home, presumably when Jason was a child.

It has a lot going for it, but also a lot that is just so bizarre. The shaving scene, for one. But I have watched it quite a few times. Remember being so excited for this one, it having been the biggest gap between films at this point, and being released 13 years after the original. Very excited at the time. And the guy who plays Steven is John D. LeMay - Ryan, from Friday the 13th: The Series! Add in Erin Gray, and I was a happy fan.

I wondered about that crate! I was like, "Is this a reference to The Thing?"