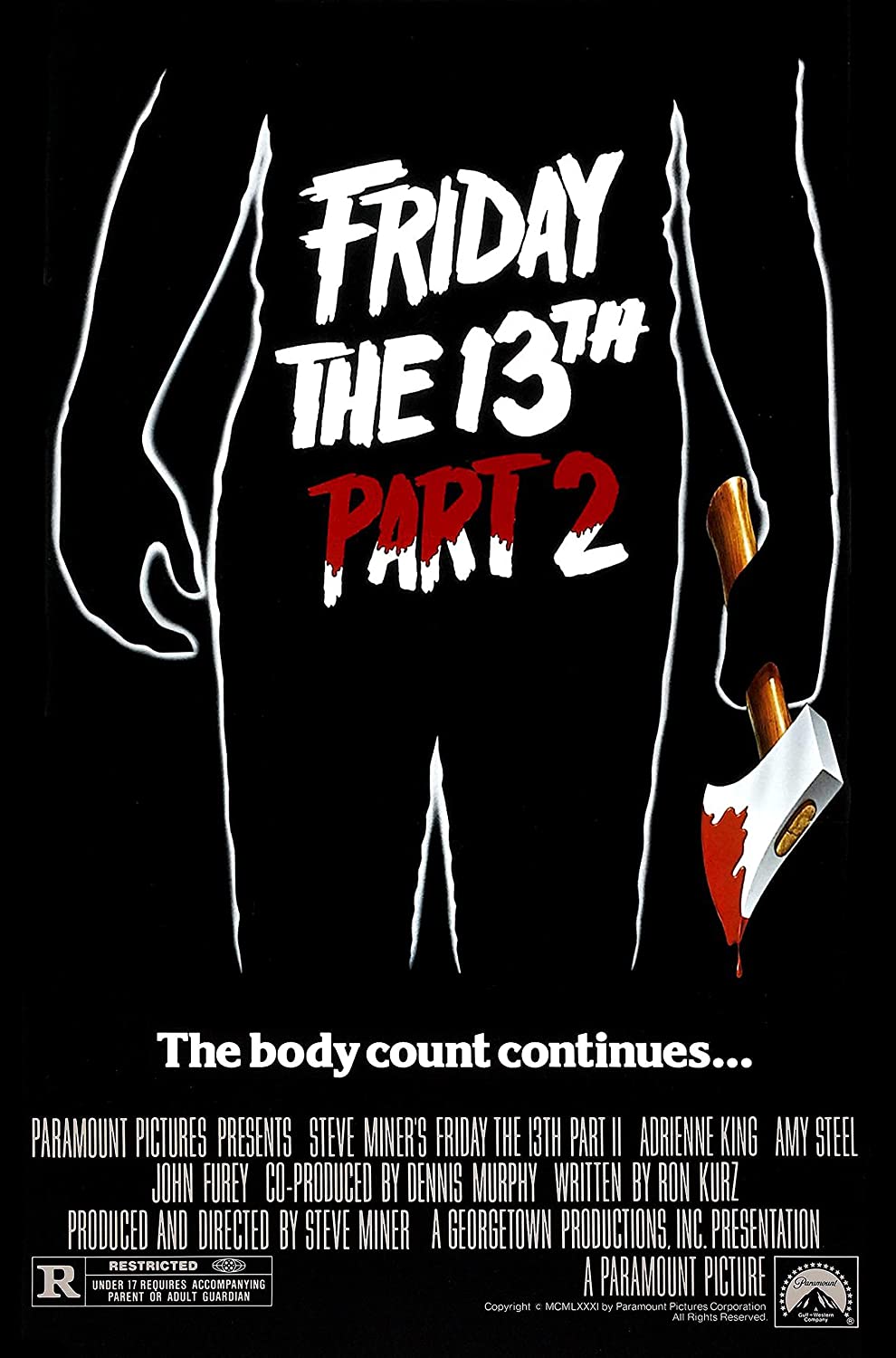 After the first movie with Mrs Voorhees as the killer, I speculated that the sequel would introduce her son in some kind of supernatural way. The end of the first one leans hard in that direction (although out of nowhere, in contrast with the relatively mundane murder mystery of the rest of the film), so I imagined that Mrs Voorhees' deep, emotional connection with her dead son would cause him to be resurrected in some way. But I couldn't figure out how he'd go from being a small, teenage boy to the hulking monster needed to drive the rest of the series.
Part 2 answers that question by rejecting any supernatural premise at all. Jason's potential resurrection was all in Alice's imagination. The truth is more grounded, if no less unlikely. Since Jason's body was never recovered from the lake, legends persist that he never actually drowned at all, but now roams the woods around Crystal Lake as an adult. And that turns out to be the actual case.
It doesn't make a lot of sense at first thought. Mrs Voorhees goes on a murder spree because she thinks her son drowned. She wanders those woods a lot, so how come she never encountered her son alive before? Part 2 reveals that he clearly knows about her, but he's never approached her?
There's a possible explanation though, which is that she does know that he's still alive, but is no less angry about the negligence of the camp counselors who almost caused his death. And then there's the fact of Jason's deformity as revealed at the end of the film (he spends most of the movie with a sack over his head; not yet the iconic hockey mask). Was Jason deformed before he drowned and that's part of why his counselors wanted nothing to do with him? Or was his deformity somehow the result of drowning and being abandoned in the woods for so long? What affect do both of those options have on Mrs Voorhees' insanity? Was she already pretty close to snapping before the "drowning" and it didn't take Jason's actual death to push her over the edge? So many questions. But I don't need clear answers to enjoy the movie. There are possible answers, even if they're muddy, so I can move on and let the story unfold.
After Jason tracks Alice home and takes revenge for her killing his mom, he returns to Crystal Lake and goes quiet again for a while. But that only lasts until camp season opens and another summer camp starts training counselors near the site of the previous one.
The other camp seems to be already established, but maybe I missed something and it is in fact brand new. It doesn't really matter. Even if it's been around for a while, there's an explanation for why Jason hasn't bothered it before. Local legends aside, we don't have any evidence that Jason ever killed a human being before taking revenge on Alice. Maybe that awakens something in him that compels him when he sees activity at the new camp.
The new camp is run by a guy named Paul and his assistant Ginny, who's also his girlfriend. He's not building his camp from scratch the way Steve was in the first film, so rather than cleaning, hammering, and painting, Paul has gathered his counselors for a training session in first aid and wilderness survival. And there are a lot of counselors. I was shocked by how many potential victims the movie introduces right away and couldn't figure out how I was supposed to keep that many straight in my head.
But then the movie surprises me again by having most of the staff go off to town for a last hurrah before the serious training begins the following day. A handful of counselors stay behind and there's our real victim pool for the movie. And while Paul and Ginny initially go to town with the other celebrants, they come back early to discover what Jason has wrought and to face him themselves.
It's a cool, different take because rather than just having a Final Girl, Part 2 gives us a Final Couple. Even though Paul is dating an employee, he's not super creepy about it. I don't love the guy, but I like him just fine. He's clearly trying to find the balance in his relationship with Ginny, but their fondness for each other overshadows any issues around power or authority.
None of the actors in Part 2 are very good and that includes Amy Steel as Ginny, but I like her a lot anyway. She's super pretty, so maybe that's why, but I also like that she's a grad student in psychology. That ends up being just a way to throw in some theories about why Jason might be doing what he's doing, but it's still cool that Ginny is smart and holds her own next to Paul (including beating him in chess). If they defeat Jason, they do it as a team.
The movie is ambiguous about whether Jason is defeated at the end. In another surprising move, it fades to black as Ginny goes unconscious while Jason and Paul are still fighting. Ginny wakes up on a stretcher being loaded into an ambulance and neither she nor we the audience know what happened between Jason and Paul. Is Paul okay and still in the cabin? Is he dead and Jason has disappeared again into the woods? Hopefully Part 3 will give me those answers. 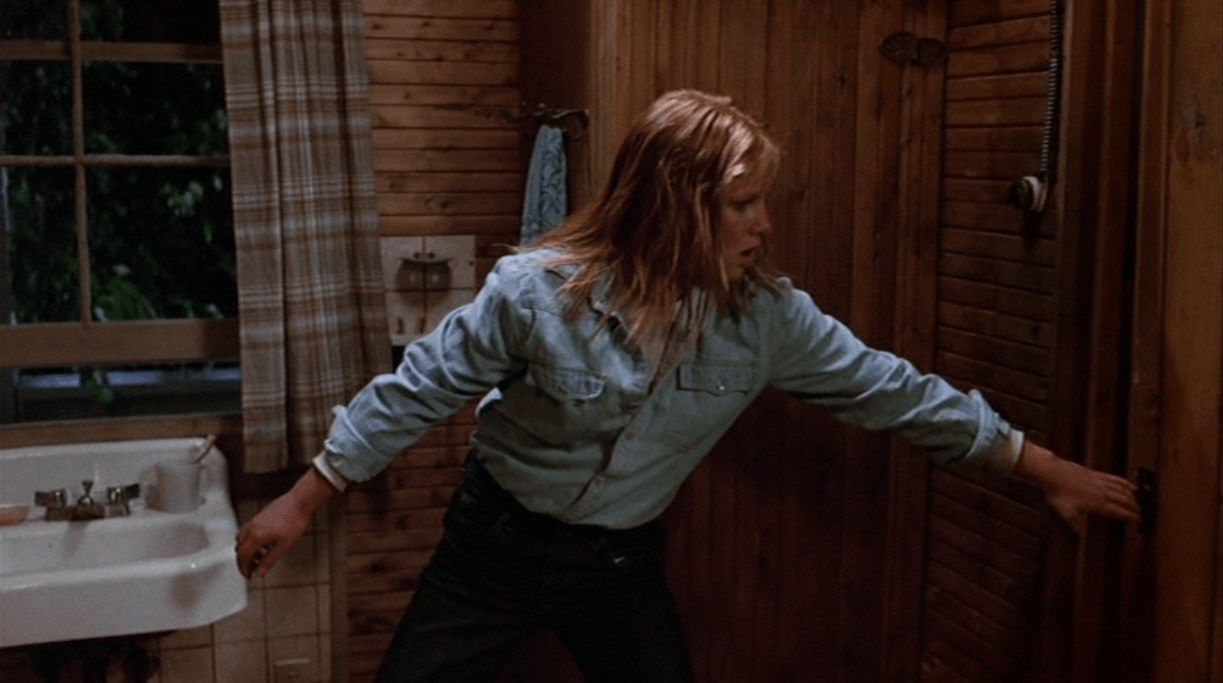 Gonna sound like a broken record, but I love this one, too. Ginny is so great. Smart and resourceful, and fun. As for Jason, my take was always that he survived drowning and lived in the woods, confused, maybe scared of his mother, too, or tired of her obsession with her "good boy". So he hid himself, and only reunited with her as he watched her beheaded by Alice. Soon enough, he decides to take on Momma's mission of vengeance against anyone who comes to the lake. :)

Nice! Love that interpretation of Jason as maybe being frightened of his mom.