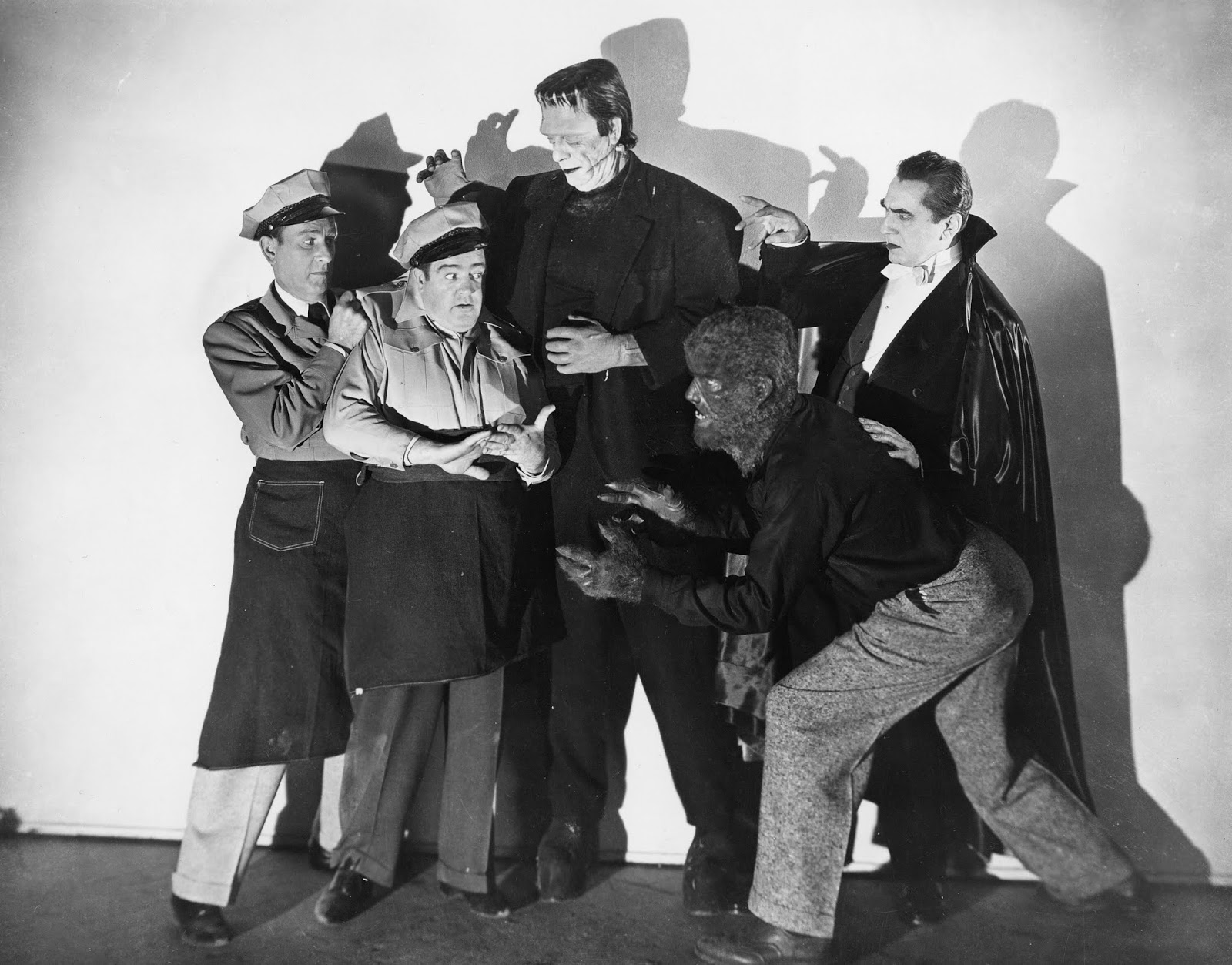 I was going to try to limit myself to one Universal Monster movie for this list, but when I was looking at '40s horror movies, Universal dominated my favorites the same way they did with the '30s. Just for a different reason.
Universal monster movies in the 1930s were still trying to be genuinely scary and that carried over a bit into the '40s. But by the middle of the decade, they were getting pretty goofy. That's not necessarily a bad thing though. I like both the serious and the silly versions of these characters.
The epitome of the silly side of Universal horror is Abbott and Costello Meet Frankenstein. It's such a funny film, but not at the monsters' expense. It keeps me hooked by treating Dracula, Frankenstein's Monster, and the Wolf Man as actual, scary beings and not objects of parody. It even continues Larry Talbot's tragic quest to end his curse in a way that jives with everything that's come before. The humor is all in Abbott and Costello's (especially Costello's) reactions to them, as well as just some very funny jokes ("Hey, you're gonna have to get your dog away from the phone. I can't hear a word you're saying.").
And of course, though the three most popular Universal monsters had already appeared together in House of Frankenstein and House of Dracula, this was the only time that Bela Lugosi got to join in the team-up, finally reprising the role that made him famous. The only way it could have been better would have been if Boris Karloff had played Frankenstein's Monster, but I also like Glenn Strange (who'd been in the two House of movies) quite a bit. No complaints there.
at October 06, 2020

And as sympatico as we are on Son of Frankenstein, I don't enjoy this movie. Which is a shame, because I *love* Abbott and Costello. I don't find it funny and it's a little boring. I've tried twice to watch it.

I do like both of the Universal "House of" monster rally movies. I'm not sure why I don't enjoy this one. I put that on me because it seems like *everyone* loves this movie.

So, Michael, when are we going to start a Universal Monster movie podcast? Hellbent for Monsters anyone?

Easily the best of the “official” Universal Monster crossover films and the longest runtime of the series I believe.

Last year I binged all of Lon Chaney Jr’s appearances as The Wolf Man and it’s quite depressing to see his death seeking become more desperate, especially given Chaney’s real life alcoholism. Seeing him as proactive and heroic hunting down the other monsters is quite uplifting, and his finale act to catch bat-Dracula in a midair leap still makes for an astonishing climax and a positive conclusion to his character.

The plot about body swapping Costello’s brain with the Frankenstein monster doesn’t make a lick of sense, but then again it doesn’t have to in order to be funny.

My favorite gag is when Abbott and Costello barricade the door only to realize the door swings the other way. It’s a great example of humor coming from ignorance/misunderstanding rather than the monsters themselves acting “funny”.

Sign me up for “Key and Peele Meet IT” or “Tiny Fey and Amy Poheler Have a play date with Annabelle”.

Pax, don't tempt me! We may have to do some reviews on AfterLUNCH though. That would be fun.

Erik, I have a hard time picking a favorite moment. There are so many! But I especially love how confused Abbott is by Costello's apparent success with attracting women.