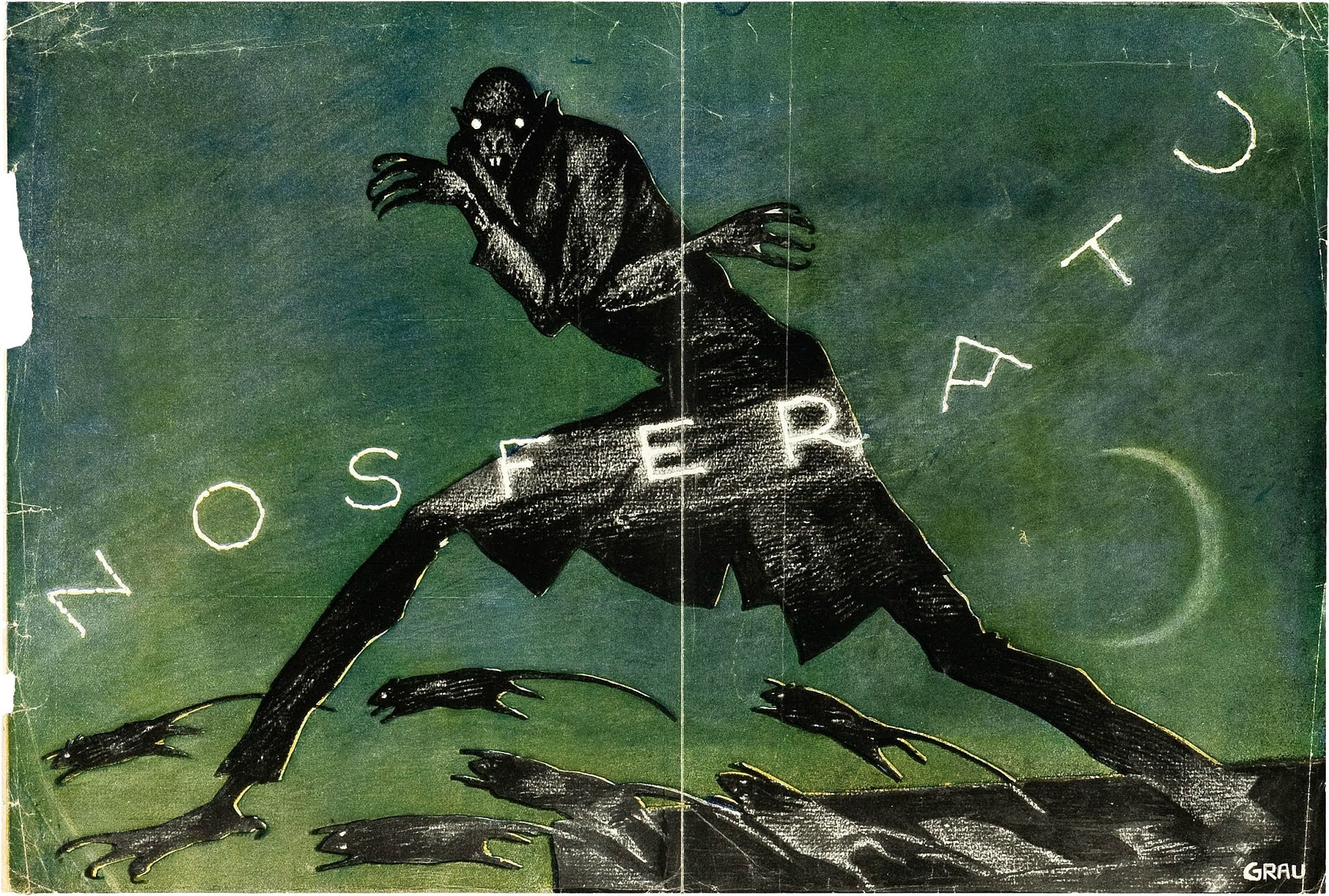 When Jess suggested that the Filthy Horrors crew come up with our 15 favorite horror films, I thought of a couple of different ways of approaching it. I could of course try to figure out my actual, fifteen all-time favorite horror movies, ranked from most favorite to 15th favorite. But that sounded like a lot of work that would probably be inaccurate as soon as I started posting it. My favorites change all the time depending on the day and my mood.
So instead I've come up with a list of favorites from different decades. I've got at least one movie to represent each decade from the 1920s to the 2010s. Instead of ranking them by my personal preference, I'll just go through the list chronologically starting with 1922 and FW Murnau's unofficial Dracula adaptation, Nosferatu.
I've written about it before, but the gist is that while Nosferatu does have story problems (Professor Bulwer, the Van Helsing character, has no purpose in the movie, for example), the style of the film is so strong, and its vampire is so utterly horrifying (thanks both to Max Schreck's performance and the way Murnau filmed him), that nothing else matters. It's not only a great adaptation of Dracula, it's possibly the best vampire movie ever.
In addition to its style though, I love how the film handles Ellen, the Mina Harker character. Like in the novel, she's the one who figures out what's going on and understands how to defeat the vampire. But in the movie, she learns that the only way to do this is to willingly letting the Count feed on her until daybreak so that he's trapped and destroyed by the sun. It's a horrible, but emotional fate for her and I'm always moved by it no matter how many times I've seen the film.
She's such an interesting character: extremely sensitive and at first glance, irrationally paranoid. But her fears are always proved prophetic and I end up loving her insight and her sacrifice.
at October 02, 2020

Email ThisBlogThis!Share to TwitterShare to FacebookShare to Pinterest
Labels: countdown to halloween, nosferatu

This is such a great film the images are so haunting. Defiantly one to watch during the spooky season.

I'm always a little conflicted whenever someone described NOSFERATU as an adaptation of DRACULA - it's a bit like calling Marvel's Thor an adaptation of Superman, in that while there's a clear debt of inspiration the outcome is so fundamentally different that one honestly prefers to regard the derivative as a thing entire to itself.

On the other hand reading about Mrs Florence Stoker taking the war trail to hunt down ALMOST every copy of NOSFERATU did give me the mental image of Mr & Mrs Jonathan Harker teaming up with her to stamp out all the parties involved in this rampant Vampire Propaganda* during the course of some adventures in Weimar-era Germany, so perhaps NOSFERATU isn't quite as divorced from Mr Stoker's Magnum Opus in my imagination as one would like to think.

I do feel that the later remake made a pretty substantial mistake by using the DRACULA names without changing the setting (or very much of the plot) to more faithfully reflect the novel: I'd have rather it formalised the separation (although it's conclusion did give me the mental image of a rather fun inversion of the classic DRACULA dynamic that one would be happy to share with you, assuming you've already seen the Klaus Kinski version of the film).


*Message of DRACULA by Bram Stoker - Vampires a JERKS and good at concealing the fact for just long enough to eat you, but if you're brave and sensible enough you can deal with them without losing your life or your soul; message of NOSFERATU, Vampires are terrifying and there's no way to stop them without getting killed.

I love your thoughts on the messages of Dracula vs Nosferatu and the implications for the Vampire Propaganda conspiracy. I'd love to hear your thoughts about the Kinski version, too. I've seen it.

Aaaah, excellent! Well my major notion r.e. the Kinski NOSFERATU (other than the grumble mentioned above r.e. character names and that Ms. Adjani is RIDICULOUSLY attractive) is that the rather sad twist ending would make an excellent hook for a film in which an enigmatic aristocrat of Austro-Hungarian extraction shows up to make life more sinister for an unassuming provincial solicitor, his dear fiancee and the cosy nook of Germany in which they are currently mapping out their future.

The name of that lawyer is, of course, Hutter - the name of that aristocrat is Baron Vordenurg - and the whole story is quite obviously an inversion of DRACULA (in that it's the nebbish lawyer who is a vampire obsessing over a young woman who reminds him of his lost beloved and the rather eerie Mitteleuropean Aristo who is, in fact, our Fearless Vampire Hunter) quite as much as a sequel to the NOSFERATU of the 1970s.

Hopefully this would work first as a juicy subversion of expectations, then as a classic Vampire Horror in its own right!