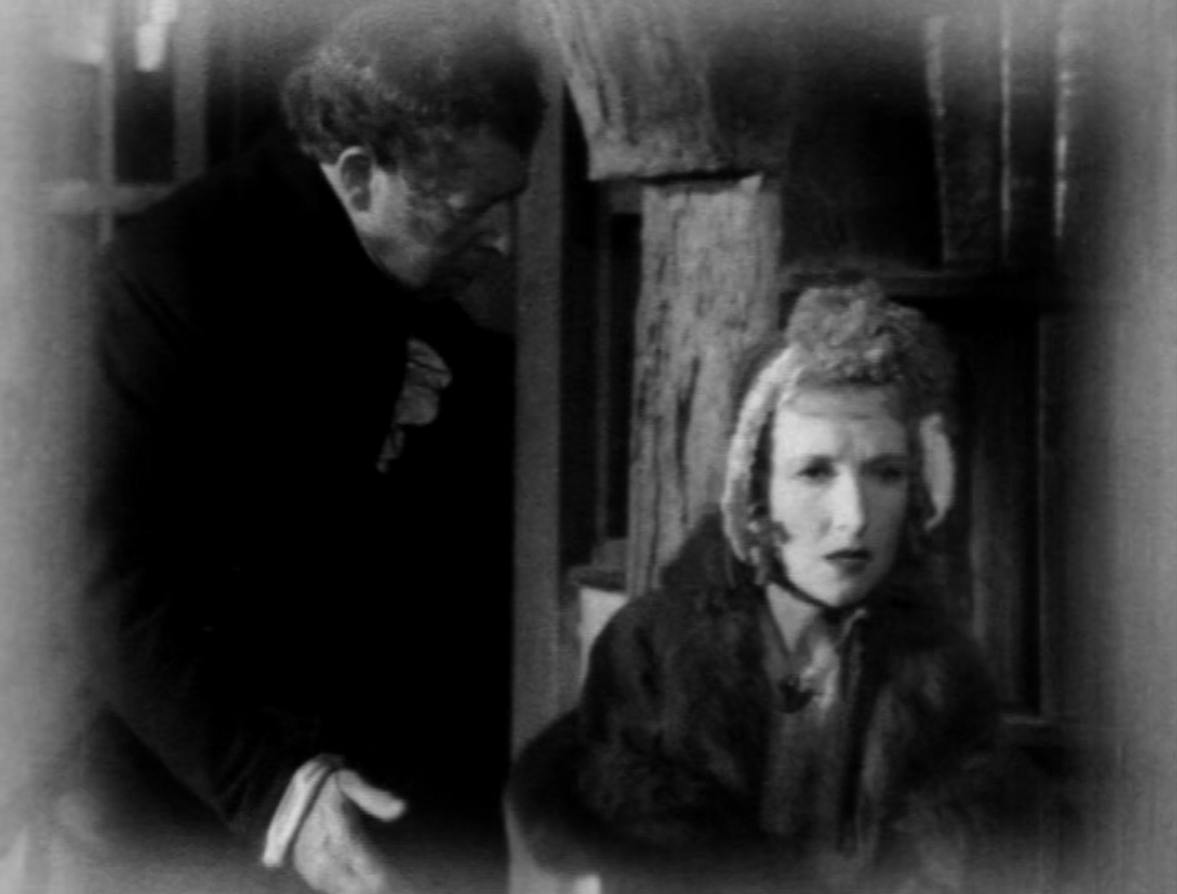 In Henry Edwards' Scrooge, Belle walks into Scrooge's office just as he's sending a couple to the workhouse for not paying their debt. The couple pleads, but Scrooge is resolute and Belle hears the whole thing.
Once the couple leaves, Belle confronts Scrooge. "So it is true." She's been hearing rumors about Scrooge's ruthlessness, but has apparently resisted believing it. Rather than any recent bereavement of her own, this Belle is facing sudden, hard truth about the man she's engaged to. She's ticked off in the early part of the scene and can't even look at him for a good, long while.
He tries to explain himself and he's very logical about it. This is just the way he does business and he insists on leaving sentiment out of it. Belle points out the harshness of his refusal to offer the couple even "a little breathing space," but Scrooge puts his own foot down. He sees her compassion as feminine weakness and asks that she leave his business concerns alone. He says that he'll be even more insistent about it once they're married, but by this point she's already removed her engagement ring and set it on his fireplace mantle. Scrooge can't believe what's happening, but he still talks to her formally and with what he believes is authority. Belle softens, no longer angry, but she's resigned and sad.
She never mentions fear in the scene, but I think that element comes through in other parts of the dialogue and in Hicks' performance. He's struggling hard to conduct business in what he thinks is the smartest way while resisting the influence of Belle's merciful attitude. While he never lets up or changes his demeanor, he's clearly shaken by her and I believed frightened by the effect she could potentially have on him.
Looking on, Old Scrooge continues to be passive and weak. He doesn't argue with the Spirit or demand anything, he just looks defeated. But the Ghost isn't done with him and we do get to see the scene of Belle and her family.
It's a pretty great version of this scene. I tried to add up the number of children running around the parlor and counted almost 20. They're a big enough group to have formed two circles for running and singing "Here We Go Gathering Nuts in May." Belle leads seven kids around the Christmas tree and her oldest daughter leads five more near a table where another five kids are banging and playing musical instruments. It's the definition of large and boisterous, if slightly more organized than what Dickens described.
Dad comes in and he's alone in this version, instead of accompanied by a porter. That's because his presents for the kids are small and tucked into his coat pockets, but the children know what's what and rush him anyway to collect their gifts.
After that, Belle and her husband have their conversation as Dickens wrote it, but rather than cut immediately to Scrooge, the camera lingers on the couple long enough for Belle to kiss her husband and hug her children appreciatively. Dickens doesn't really say what her reaction is to the news that Scrooge is alone and about to lose his remaining friend, but I love seeing that it makes her even more grateful for the people in her own life.
Still passive, Old Scrooge looks exhausted as he asks the Ghost to haunt him no more. But when the Spirit declares that these visions are Scrooge's own fault, Scrooge is angry enough to raise a fist and shout something. I'd like to know what he shouts, but in my print of the film, it's cut off and the scene immediately cuts to Scrooge asleep in his bed. This Ghost carried no extinguisher cap, so we wouldn't have had that part of it at any rate. I bet the intention was always to smash cut from the vision to Scrooge's room. But I'd like to know what Scrooge was yelling and if it suggested that he was finally getting a backbone about what's happening to him. I want to put a pin in this and see if he's more engaged with the next Spirit.
at December 14, 2020

An interesting take, having Belle make her decision based on what she sees at that visit, even if she was already leaning that way. Being forced to face the harsh truth can be the thing that breaks romantic notions, for sure.