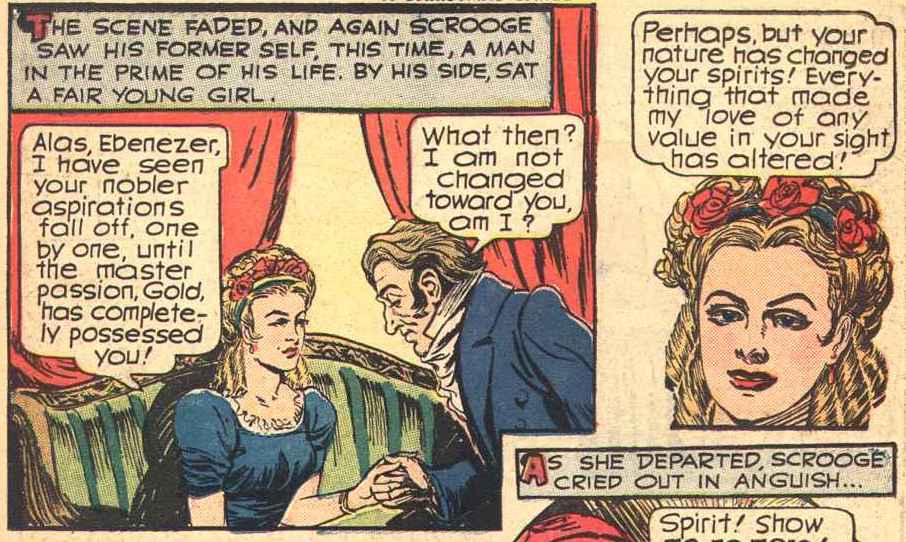 The Classics Illustrated adaptation dedicates a couple of pages to this year's scene: one for each vision of Belle.
In the first one, the break-up scene, Belle and Young Scrooge are fully colored, tangible figures, which is a change from the previous visions. At the school and Fezziwig's warehouse, the figures Scrooge saw were ghostly, white outlines. This vision feels more real and important.
Belle's wearing a blue dress and red roses in her hair, so she's hardly a woman in mourning. The dialogue is abridged, but gets the gist of the conversation across nicely. There's no one incident that seems to have sparked her decision to leave Scrooge and she doesn't even suggest that his feelings towards her might have changed. She's just noticed his greed and wants nothing to do with the man he's become, though she's sad about it and doesn't wish him any harm.
Scrooge is visibly upset by the memory and covers his eyes in one panel. But the text points out that the Spirit "forced him to observe what happened next," and on the next page the Ghost has its hands on Scrooge's arm. The Ghost is physically smaller than Scrooge (which is faithful to Dickens), so Scrooge looks like he could get away if he wanted to, but he's compliant. The Spirit's "forcing" him to watch probably isn't an act of physical restraint in this version, but just evidence that Scrooge has accepted the Spirit's authority.
The vision of Belle's family goes back to the white, transparent figures for a panel, but they solidify and gain color in the next. We probably shouldn't read much into that, but I'm still interpreting it as this is a vivid, important vision, though we got to see a hazy, ephemeral image as one scene transforms into the next.
Belle's family is reduced to her husband and one, smiling, quiet baby in this version, so there's no large, boisterous bunch. Belle's husband doesn't ask her to guess which old friend he saw earlier, but she guesses anyway and gets it right, of course. The husband mentions that Marley is near death and that Scrooge is quite alone in the world. Their pity causes Scrooge to cry out in terror according to a caption and ultimately to spring upon the Ghost. But as Dickens wrote, there's really no contest and the Ghost seems untouchable.
There's no final, shocking transformation by the Ghost into the various faces from Scrooge's past. And since this version of the Ghost never had an extinguisher cap, Scrooge doesn't get to use it to try to snuff the ghost out. Scrooge simply takes a run at the Spirit and then is asleep in the next panel, with a caption saying that he "was conscious of being in his own bedroom" before drifting off.
at December 03, 2020

Simple and to the point, I suppose. Feel like a little is lost, in the conversation between young Scrooge and Belle.

Reminded me of something I meant to comment on yesterday, however. When Belle's husband asks her to guess who he saw and she guesses Scrooge correctly it made me speculate that maybe this was a running thing or in-joke between the two. Perhaps they have discussed Scrooge and what he has chosen for his life and over time it has evolved into this simple back and forth between the couple, what they gained together and what Scrooge is missing out on. Might just be reading too much or too deeply into what might just be a way to move things along by Dickens, but it is where my mind wanders.

Reading too deeply into it is the name of the game around here and I love that theory! Based on the text, Belle still cares about Scrooge enough to pity him and it's nice to think that she's comfortable sharing her concern with her husband, who in turn is engaged with her enough to give her news of Scrooge when he hears it.