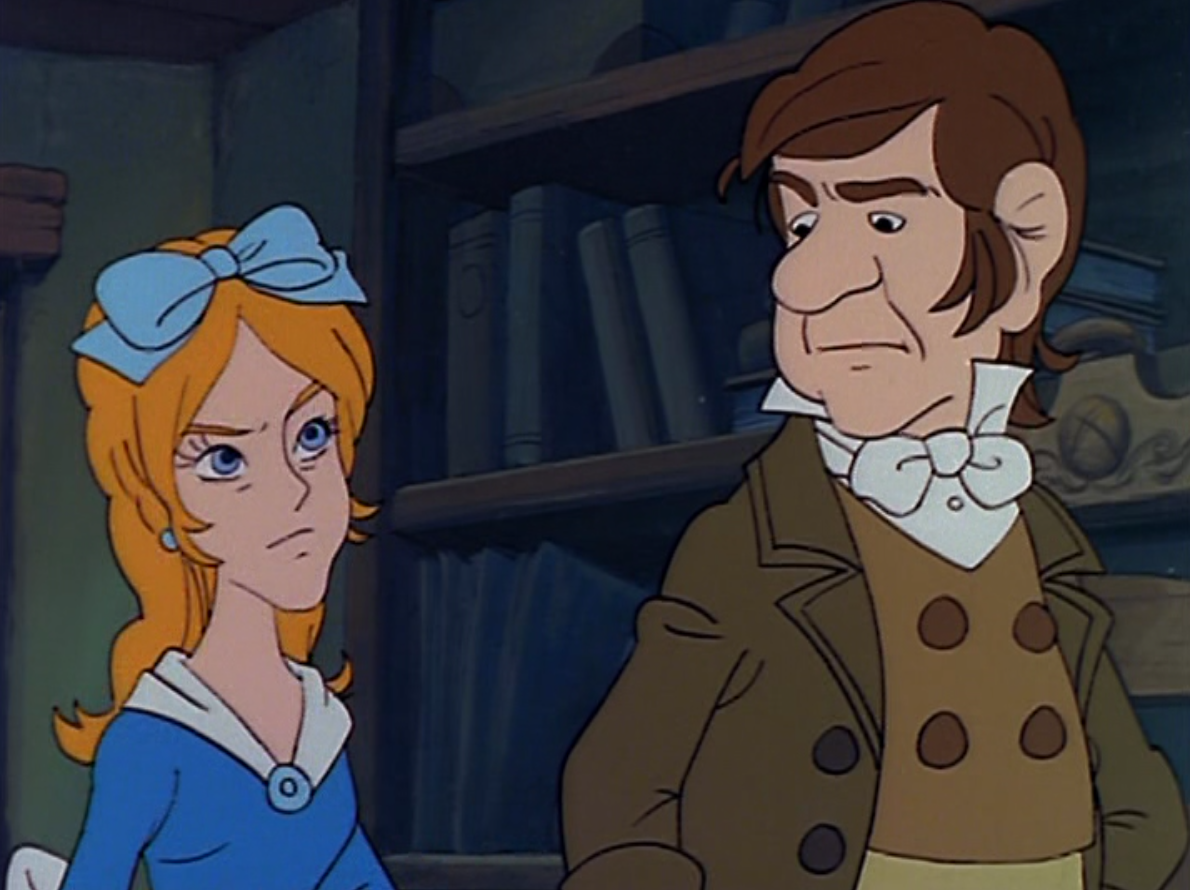 In Rankin-Bass' version of The Stingiest Man in Town, we've already met Belle at Fezziwig's party. In fact, the party was mostly about her and Scrooge's relationship and we got a whole song revealing their very different dreams for their future together. They didn't seem to mind and ended that song in a kiss, but Old Scrooge looking on wept openly and said that he shouldn't have remembered.

But, as the Spirit says, "There is another Christmas." He takes Scrooge forward to when he'd just formed his partnership with Jacob Marley. "Your business was new," the Ghost says, "but your ways were set."

But the Ghost is unrelenting. "You must drain the cup to the dregs." I like that image.

They materialize at Scrooge and Marley's office and Scrooge moans pitifully as he realizes what he's about to see. Inside, Belle (in a bright, blue dress, not mourning black) complains about "another idol" and this version quickly deviates from Dickens by having Young Scrooge scoff that she's being overly dramatic. He's working and is more interested in complaining about how he's losing money than he is in listening to her.

Belle tries to get him to lighten up about some potentially defaulting loans by reminding him that it's Christmas. Scrooge goes nuts and rants about Christmas, finally declaring that it's a humbug (and suggesting that this incident is the origin of that expression).

That's when Belle declares that she's breaking up their engagement. It makes it sound a little like it's his attack on Christmas that finally does it for her, but you can also read the scene as she came here to break up and his Christmas rant is the excuse she needs to finally come out with it. "You have become someone I do not know. Someone I do not wish to know."

She breaks into another song, "It Might Have Been," to spell out what he's giving up. And as she sings, we see images of their potential life together: hanging out in a cozy room decorated for Christmas and with a fire blazing in the fireplace as their two children rush in for hugs, presents, and kisses.

As Belle runs crying out of Scrooge's office, he picks up the song in a voiceover. The actual Young Scrooge doesn't know what he's missed, but in the language of the musical it's clear that he'll eventually come to regret this night.

The image goes split-screen with Scrooge continuing to work in his office and Belle running through the empty streets of London. Both characters age before our eyes (with dramatic, crashing waves indicating time jumps) and the song closes with Old Walter Matthau Scrooge alone in his office like at the beginning of the story while Belle - also old and alone - wanders the streets without any purpose. No happy ending for Belle this time. This evening has ruined them both.

The Old Scrooge with the Ghost sobs that he cannot bear any more and grabs the extinguisher cap. He quickly jams it over the Spirit's head before the Spirit can even react and then the scene cuts to Scrooge in bed snuffing out a small candle with a little extinguisher.

Dark futures. Reminds me of Mary Hatch in It's a Wonderful Life being an old spinster without George Bailey. Not fond of the idea of their lives ruined without their man, but I get how it gets the point across.

Yeah, I'm not crazy about that either. I much prefer the happy ending for Belle.

In one of the live-action movies, she appears to be single, but has dedicated her life to serving the poor, which is pretty cool too.