“Another Idol Has Displaced Me” | A Christmas Carol: The Graphic Novel (2008) 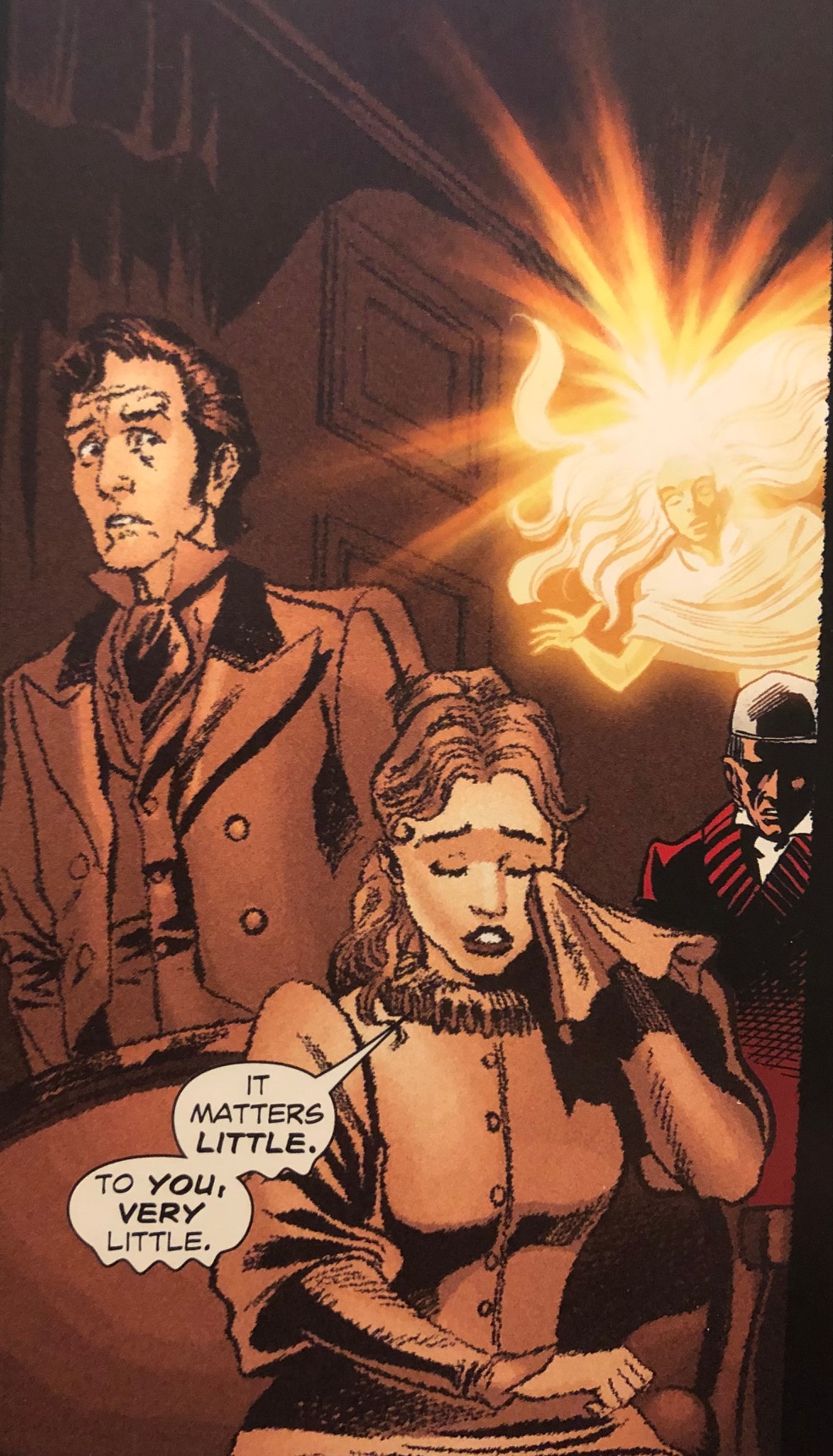 Classical Comics' version by Sean Michael Wilson and Mike Collins gives seven pages to this year's scene; most of them on the first half where Belle and Scrooge break up. All of the flashback visions in Wilson and Collins' adaptation have been in sepia tone, so it's impossible to tell the exact color of Belle's dress, but it does seem to be lightly colored for a mourning dress. And there's no other mention of her parents' having recently died, which is appropriate since the adaptation is sticking as close as it can to Dickens' dialogue.
Dickens gave the break-up scene a lot of language and that's why it gets so many pages here. I appreciate that Wilson and Collins didn't try to cram it all into a few panels, but let it breathe over a few pages, even if there's not a lot of visual excitement with just the two characters talking. Belle is very pretty though and Young Scrooge is handsome and not completely twisted by greed and cynicism yet. But Belle has seen the warning signs (she doesn't mention any specific thing that he's done) and is cutting off the relationship before Scrooge gets worse. She's visibly upset (they both are, really) and there are a lot of tears before it's finished.
Neither Young nor Old Scrooge cries, nor does the Ghost have to physically restrain Old Scrooge for the next vision, but Scrooge does protest about seeing more. Without even knowing what's coming, he's done with all of this. Or wants to be.

Belle ends up with a large, lively family, if not quite as enormous and out of control as Dickens gave me the impression of. There's her oldest daughter and then four younger kids: the oldest of which are girls and the youngest are boys. When Dad comes home with presents (accompanied by a porter, as in Dickens), the younger children rush him and there are cheers and laughter all around.
This scene takes a couple of pages before Scrooge again demands to be removed. As he grabs the Spirit's extinguisher cap, there's a halo of other faces around the Spirit's. It's a small panel and the art is washed out somewhat by a bright light effect in the coloring, but I think these other faces are Schoolboy Scrooge, Apprentice Scrooge, Fan, Fezziwig, and Belle. Even if I'm not completely right about that though, it's nice to see this detail from the book make it into an adaptation.
The rest of the page has Scrooge snuffing out the Spirit with the cap and then alone in a dark room with a small circle of light spilling out from beneath the cap. That last panel is nice and dramatic with Scrooge drawn very small and surrounded by lots of black space. When we turn the page, he'll be asleep on the floor of his room.

Nice piece of art you chose here, sums the main scene all in one image.