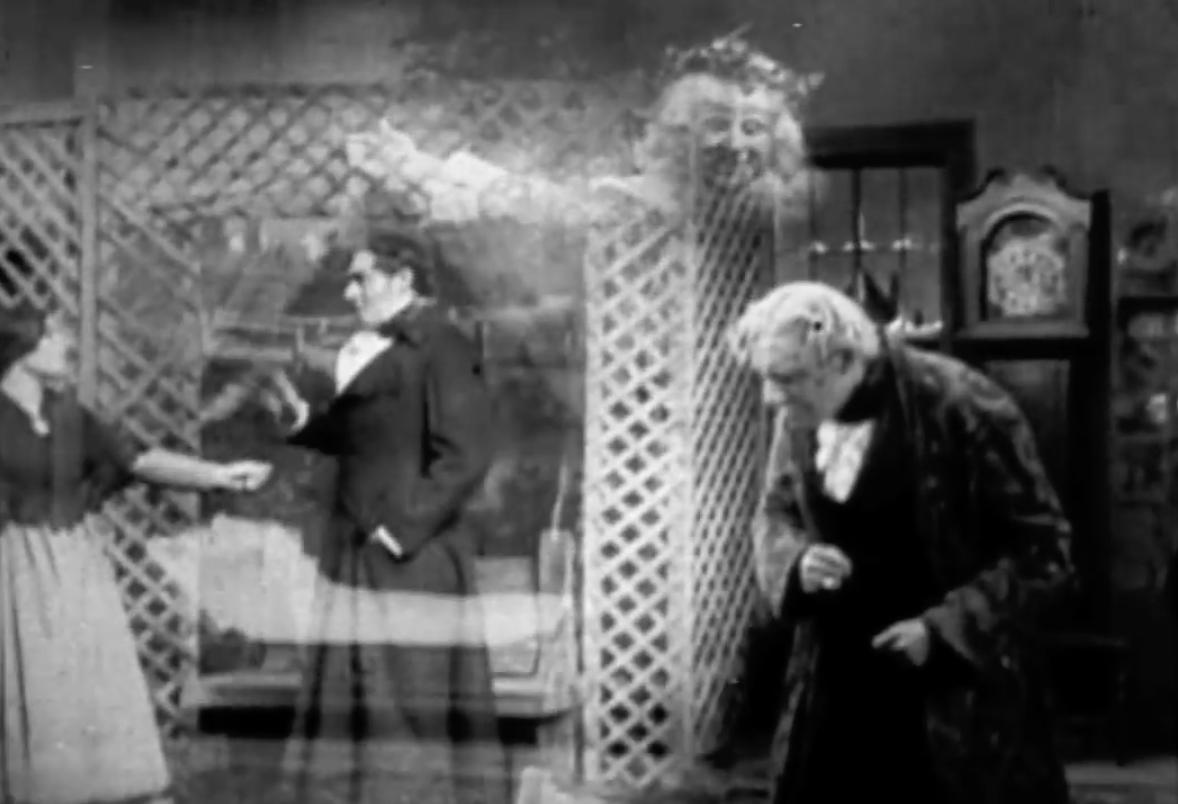 Thomas Edison's silent film puts this scene in with other "incidents of [Scrooge's] youth and early manhood" that it doesn't spend any time explaining or even providing context for. I'm pretty sure that Belle (unnamed in the film) is the same character that Scrooge kissed in the party vision, but it doesn't make much difference either way.
There are no intertitle cards to explain even the broadest strokes of why the couple is breaking up, much less any specific details about mourning or something that Scrooge has done. Belle is wearing a darkly colored shaw, but that's not enough to suggest that she's a recent orphan.
Old Scrooge was dancing and enjoying the party scene, but after some unheard (by us) words from the Spirit, Scrooge is already depressed and not looking forward to whatever's coming next. He shakes his fist a little in defiance and tries to turn his back on the next scene, but the Ghost insists that he watch.
Belle and Young Scrooge appear just as she's trying to hand him something small, presumably a ring. He tries to refuse it by standing rigid and facing the other direction, but she slips it into his hand and slinks away. He looks at it and turns to reach out to her, but she's already gone. He puts the ring into a coat pocket and pretends not to be bothered, then he too fades from Old Scrooge's view.
Belle looked upset during the vision, so combined with Young Scrooge's haughty posture, it's clear that the break-up is his fault even though she's the one instigating and insisting on it. Like everything else in these Christmas Past incidents, it's a fair representation of what happens in the book, but I hate to think that this was ever anyone's first exposure to the story and their trying to figure out what's going on.

The scene ends with Old Scrooge being even more disturbed and angry as the Spirit raises it's arm to announce the next vision. In this version, there's only one Spirit of Christmas, showing Scrooge images from the Past, Present, and Future. Scrooge doesn't even get to go back to bed before the next section starts up. We just get a new intertitle card specifying that Scrooge is now going to see "visions of the present."
at December 13, 2020

Guess it is hard to ask for more in a version so very old!