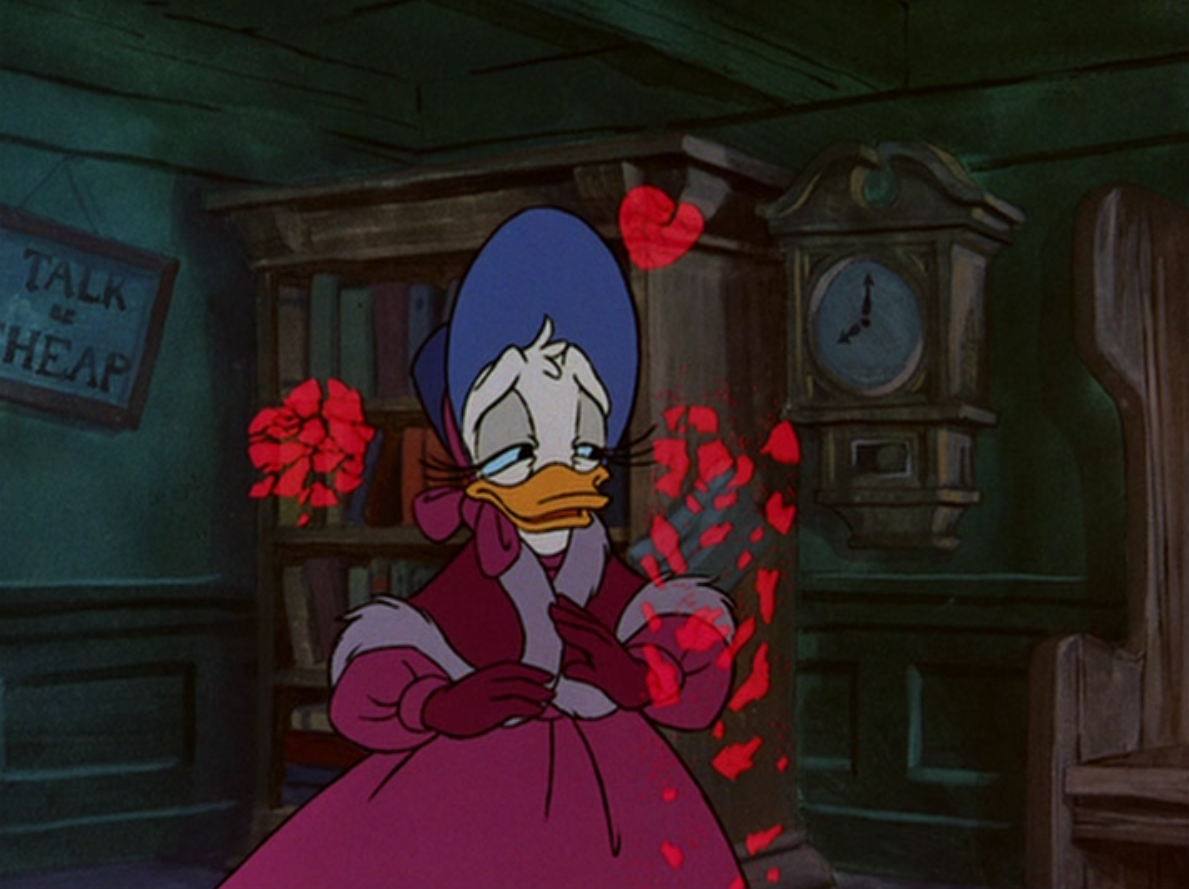 Mickey's Christmas Carol is so short that it's quite abridged and even left out the scene of Scrooge at school. Instead, the Ghost of Christmas Past took Scrooge directly to Fezziwig's which ended up being mostly about Scrooge's good days with Belle (or Isabelle, as she's called here). Watching this, Old Scrooge had sighed heavily and said that he remembered how much he was in love with her, almost willfully not thinking about how the relationship ended. Scrooge hadn't taken the Ghost very seriously, so maybe he didn't expect to have to watch the break-up scene. But the visit to the past is all about the one-two punch of Scrooge-in-love and then the break-up.
He still doesn't realize what's coming when the Ghost shows him his own office and says, "In ten years' time, you learned to love something else." Young Scrooge is at his desk, not even visible behind the huge stacks of gold coins that he's counting. Isabelle is there too, dressed warmly as if she's just come from outside. It's a colorful outfit and not suitable for mourning, but this very condensed version will provide a different, quick, clear reason for the break-up.
Isabelle talks about this little honeymoon cottage she has and wonders if Scrooge is going to keep his promise to marry her. She says, "Now I must know," which raises the question of why it's suddenly so important. Has she just run out of patience? If so, she's very sweet and humble about it. Or is there a material reason that she needs to know now? Maybe a financial one?
Scrooge's answer might be a clue. "Your last payment on the cottage was an hour late. I'm foreclosing the mortgage!" It's a ridiculous, comedic reason appropriate to this outlandish Scrooge, but Isabelle's being late with the payment might indicate that the cottage is a financial burden to her. Maybe she has a buyer who's interested in taking it off her hands and that's why she needs to know if she and Scrooge are ever going to use it. These details clearly aren't important to the story; they're just fun to speculate about. What is important is that we're seeing in action Scrooge's change in attitude toward money and toward Isabelle. It's a great example of showing instead of telling and it's played for laughs in a really effective way.
Old Scrooge does look upset about watching this, so it's effective when the Spirit piles on a little more guilt. "You loved your gold more than that precious creature, and you lost her forever." Scrooge pleads that he can no longer bear these memories and asks to be taken home. He's not super emotional about it like in Dickens and other adaptations, but any amount of regret from this Scrooge is a milestone.
After one last dig from the Ghost that Scrooge fashioned these memories himself, the scene dissolves back into Scrooge's bedroom where his bedside clock is chiming two.
at December 11, 2020

Glad they included it, even changed and abridged. But this might be the most heartless any version of Scrooge acts toward Belle. All about the gold here.