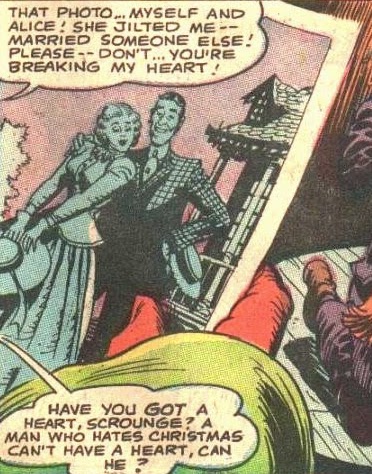 The Teen Titans Christmas Carol isn't an adaptation, but an adventure inspired by Dickens' story. The Titans have noticed similarities between Dickens' characters and the people involved with the Titans' current case, so they're using Christmas Carol tactics to try to redeem Ebenezer Scrounge.

Kid Flash poses as a makeshift Ghost of Christmas Past, but only chooses one scene from Scrounge's past to show him, via an old photo. It's a picture of Scrounge with someone named Alice (instead of Belle).

What's weird - and there's plenty weird about this version - is that Scrounge says that Alice jilted him and married someone else. He doesn't say who she left him for or why. And there's no way for Kid Flash to know any of those details either. I'm not even sure how Kid Flash found the photograph. Does Scrounge just have it on his desk? The Titans haven't had a lot of prep time for this.

As far as I can tell, Kid Flash is simply making deductions based on what he sees in the picture. He claims that Scrounge was young, handsome, popular, and loved by a beautiful girl, but if Scrounge is accurate, then maybe Alice just dumped him because he was socially awkward or had bad breath.

Whatever the real background, it's impossible to predict what effect this is going to have on Scrounge. He's terrified of the Spirit and wants to get away, but Kid Flash hasn't really confronted him with anything about his past that explicitly needs changing. With this pretty sad attempt done, Kid Flash leaves Scrounge and allows him to escape his office.

Definitely a different take, to say the least.