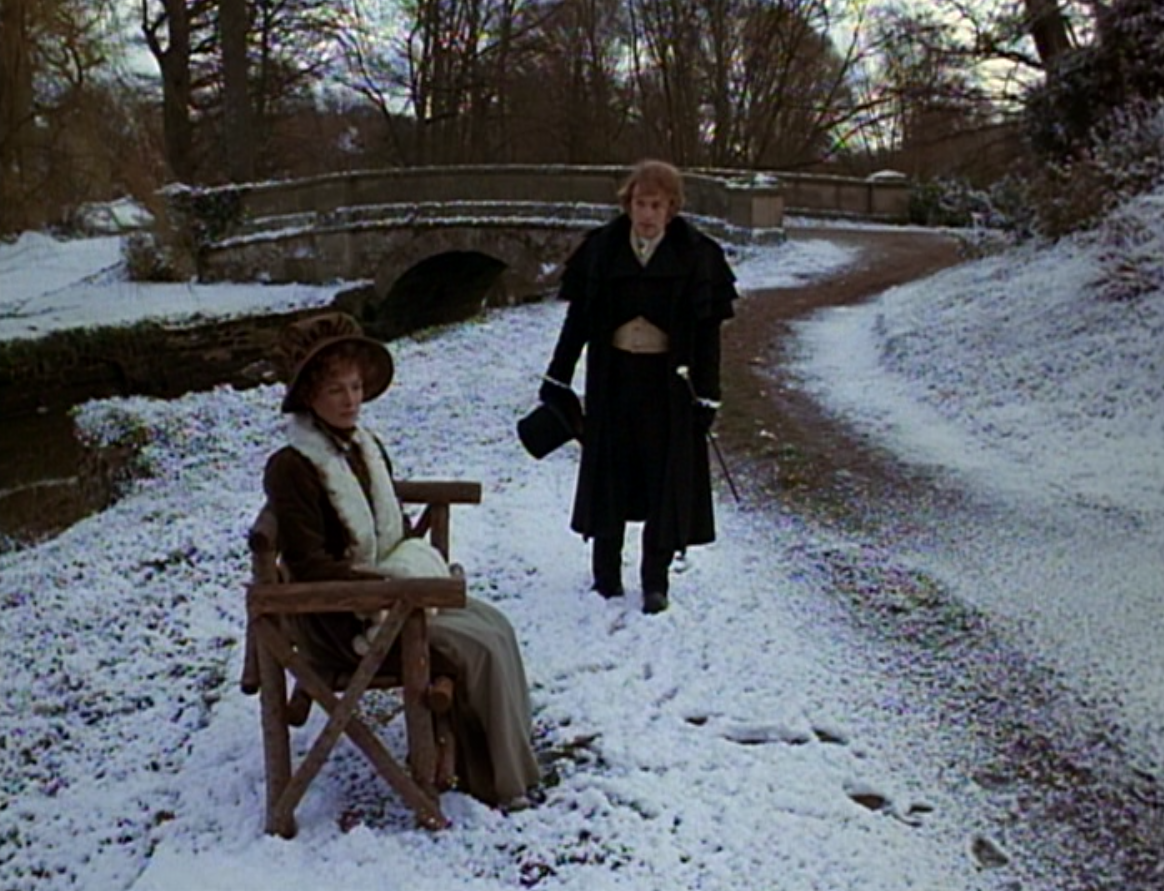 Clive Donner's version is another that places this scene outside in a park. It follows the end of the Fezziwig scene where Dick Wilkins and Young Scrooge mused that the party was a night "never to be forgotten." But, as the Spirit said, "You did forget. Often." And she shows him another Christmas Eve where he was "delayed by the pressures of business."
Young Scrooge is walking quickly through the park to meet Belle who's waiting for him on a bench. He apologizes for being late, but she's too upset to forgive him. "I thought you might not come," she says. "I know how busy you are."
He sits and agrees with her that he is very busy. She can't even look at him when she says, "Another idol has displaced me," and she comes across as jealous. When she talks about how money engrosses him, she's disgusted. He tries to blow it off. "Perhaps I've become wiser, but I have not changed towards you." And he seems to mean it. He doesn't deny what she's saying about his shifting priorities, but he wants her to be a part of them.
After a quick look at Old Scrooge watching sadly, we cut back to the couple who are now up and walking. She asks if he would still be interested in her if he was able to do it all over again. She's not wearing mourning clothes, but she refers to herself as "a dowerless girl with nothing but myself to bring to a marriage." She's sure she knows the answer and is angry with him for it.
He doesn't answer right away, but just looks ashamed. "You have no answer," she presses.
He thinks about it some more, but can't bring himself to protest. "You think I would not then?"
I love her disgusted response. "Oh, Ebenezer, what a safe and terrible answer!" And she breaks up with him and walks away.
He stands there and watches her go. He has a stunned look on his face and he plays with his cane as if he's about to follow her, but can't bring himself to do it. "I almost went after her," Old Scrooge confesses.
The Spirit acknowledges that Young Scrooge wasn't yet heartless at the time and she asks him why he didn't go after her. Old Scrooge explains that on his father's death, he was left a small inheritance that Scrooge and Belle apparently disagreed about how to spend. Belle wanted to get married right away and live on the inheritance, but Scrooge insisted on investing it. And, he points out, those investments paid off and he's become a wealthy man.
The Ghost sneers at this. "You have explained what you gained. Now I will show you what you have lost."
She doesn't have to forcibly restrain Scrooge to make him watch the vision of Belle's family. He doesn't seem to know what's coming, so he doesn't protest. In fact, he seems delighted at first by seeing all her kids.
It's another outdoor scene, this time with Belle and her children waiting in front of their house for Belle's husband to come home. Belle is holding a baby and there are a bunch of kids playing in the snowy yard. I count about ten with a couple of servants helping build a snowman or pull one of the children in a little sled. Even though there are a lot of kids though, they're well behaved and orderly; not nearly the chaotic herd that Dickens describes.
A carriage arrives and Father gets out. He's carrying presents, but leaves them in the carriage to greet his quietly gathering family. No one attacks him for gifts and the closest anyone comes is when one of the girls asks politely where her present is. Father kindly insists that she and all the rest will have to wait until that night "as usual."
Old Scrooge spells out the point of the scene. "Fancy, they might have been mine." It's an unnecessary observation, but at least it lets us know that he gets it. He doesn't seem upset about it though. It's the tradeoff the Ghost mentioned. This is what he lost to gain his financial success. He understands, but seems okay with the sacrifice.
His tune changes though when Belle's husband tells her about seeing Scrooge "quite alone in the world" with Marley's dying. Belle turns very sad. "Poor Ebenezer," she says. "Poor, wretched man."
"Spare me your pity!" Scrooge commands. "I have no need of it!"
The Ghost's tactics have backfired in this version, I think. This Spirit has been haughty and condescending with Scrooge and he hasn't reacted well. He enjoyed the party and he was reminded of his love for Belle, but he's also accepted that giving her up was a reasonable sacrifice. This Scrooge has always been presented as confident and comfortable with his stinginess, never miserable. He may have feared the world when he was younger, but he's taken control and conquered that fear. He doesn't yet see the need for love.
And he definitely doesn't want to be felt sorry for. He's too proud for that and has had enough of the Spirit. He demands that she leave him and haunt him no longer and when she just grins impudently at him, he grabs her cap and forces it down over her.
She doesn't resist, but simply says over and over again, "Truth lives!" There's a bright ring of light where the cap meets the floor, but even that goes out as Scrooge keeps pressing down. And then he's in his bedroom, on the floor, twisting and pressing a rug.
at December 19, 2020

Timing! I just rewatched this one last night! Love it, love the humanity Scott gives to his Scrooge. He is mean and ornery, but not evil. Just lost, and finding his way again.

The scene with Belle, where she says "what a safe and terrible answer" is so good. Might be the best version, to me. And I was also stuck by her guessing Scrooge when her husband asks her to guess who he saw. Like we discussed at the beginning of the month, it is odd. Here, it struck me as so weird that her ex-fiance is the FIRST name she thinks of.

I do really like her delivery when she guesses. It's still weird that he's the first name she comes up with, but the actor convinces me that she's grasping at straws and just guessing.