A Christmas Carol (2019), Chapter One: The Human Beast 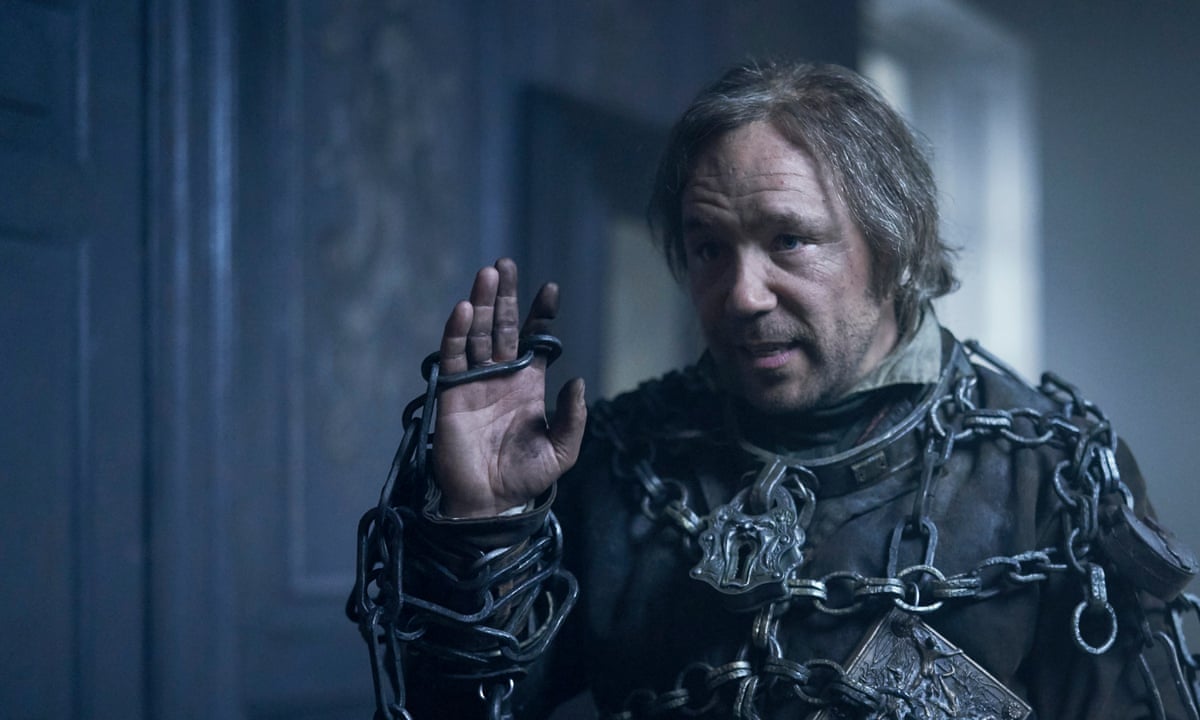 I'm usually a year behind on new Christmas movies, so I didn't see the FX mini-series adaptation of A Christmas Carol until this year. I've heard that it's especially odd and several people have asked what I think of it, so I'm going to watch it in its three parts and comment on each of them separately. With each episode taking an hour to tell only a fraction of the story, I'm curious to see what events they expand on.
Chapter One covers everything up through Marley's visit and spends its extra time in three areas. One is Scrooge and Cratchit's workday on Christmas Eve. I was surprised to see Scrooge lay out four pieces of coal for Cratchit's use before Cratchit even arrived. Scrooge also stains his shirt on that fourth piece, which he humorously regrets as just payment for trying to do something nice. There's another moment later in the episode where Scrooge is kind to a couple of chilly horses, so this version is going out of its way not only to humanize Scrooge, but to show that he's not yet irredeemable.
Once Cratchit arrives, he and Scrooge argue about the appropriate time for Cratchit to go home. Cratchit's asking for an hour early, but Scrooge has an assignment that he thinks will take Cratchit all day to complete. When Cratchit finishes it early (and perfectly), Scrooge points out the humor in Cratchit's doing it to spite Scrooge, when Scrooge has no reason to be anything other than pleased. Cratchit is a smart, capable, funny guy who doesn't mind letting Scrooge know what he really thinks of him. Scrooge points out the precariousness of Cratchit's situation, but Cratchit seems to think that if Scrooge were going to fire him, he'd have done it by now.
During all of this, Scrooge's nephew Fred comes to visit and I don't like that he says this is his last year inviting Scrooge to Christmas dinner. Fred says that the ultimatum is his wife's idea, but that doesn't soften it for me. Part of what I love about Fred is his relentlessness in reaching out to his uncle. Scrooge continually slaps the hand away and Fred keeps on extending it. It's uncharacteristic to have Fred reach his limit.
The charitable solicitors also appear in the episode, but they're just on the street collecting like the Salvation Army and Scrooge starts an argument with them.
The second thing Chapter One expands on is Cratchit's family, which is ironic considering that the number of people in it has shrunk considerably. Gone are Peter, Martha, and the two younger siblings, so that Belinda and Tiny Tim are the only kids left. I guess that Martha could show up on Christmas Day, since she doesn't live with them even in the book, but no one mentions her.
The big addition here is that someone once gave the family some money that helped them through a crisis with Tiny Tim's health. Mary Cratchit claims that it was an American cousin, but there's a lot of reason to disbelieve that story. She questions why Tim continues to write thank you notes, claiming that they're not necessary. Bob doesn't understand why not since the help saved Tim's life. Mary is also inconsistent with the spelling of her alleged cousin's name. And when she offers to post the thank you letter, she ultimately burns it. I've heard some spoilers about what might actually be going on here, but I don't know for sure and would rather pretend I don't know anything at all until the mini-series unfolds it for me.
Finally, and I've saved the biggest for last, Chapter One expands on Jacob Marley and his journey towards becoming Scrooge's door-knocker (and hopeful savior). I love the idea of building out this part of the story, because the book is pretty vague about it outside of a couple of lines of dialogue. And I'm intrigued by how it plays out here. Marley has apparently been kept conscious in his coffin for the last seven years, but is finally taken to Purgatory this year where he's presented with his chains (by a blacksmith who is also the spirit of a man who died in one of Marley and Scrooge's factories). Marley also has a pre-Scrooge meeting with the Ghost of Christmas Past that I don't totally understand, but that might become more clear once I've seen the rest.
The thing I don't like about all of this is how - like with Fred - the adaptation changes Marley's character. In Dickens, Marley tells Scrooge that he himself procured Scrooge's chance and hope of escaping Marley's fate. In other words, it was his idea to return and warn Scrooge. In this adaptation, the spirits explain to Marley that his fate is tied to Scrooge's. Since they were partners in so much evil, they both need to repent of it. Marley has repented, but Scrooge hasn't. And unless Scrooge does, the two of them will be doomed together. This makes Marley's actions selfish. Instead of begging year after year for the chance to go and save his only friend and finally being given permission to do so, he's roped into it in service to his own self-interest. I'm not into it.
The look of the series is pretty great though - dark and spooky - and I like Guy Pearce's not young, but younger, more vital Scrooge. He's an fascinating character that I'm interested in exploring with the series. Some glitches in Fred and Marley's characterizations notwithstanding, I'm liking it so far.
at December 22, 2020

Was not a fan of this interpretation. Felt it was way too much, and too dour. To each their own, just wasn't for me.