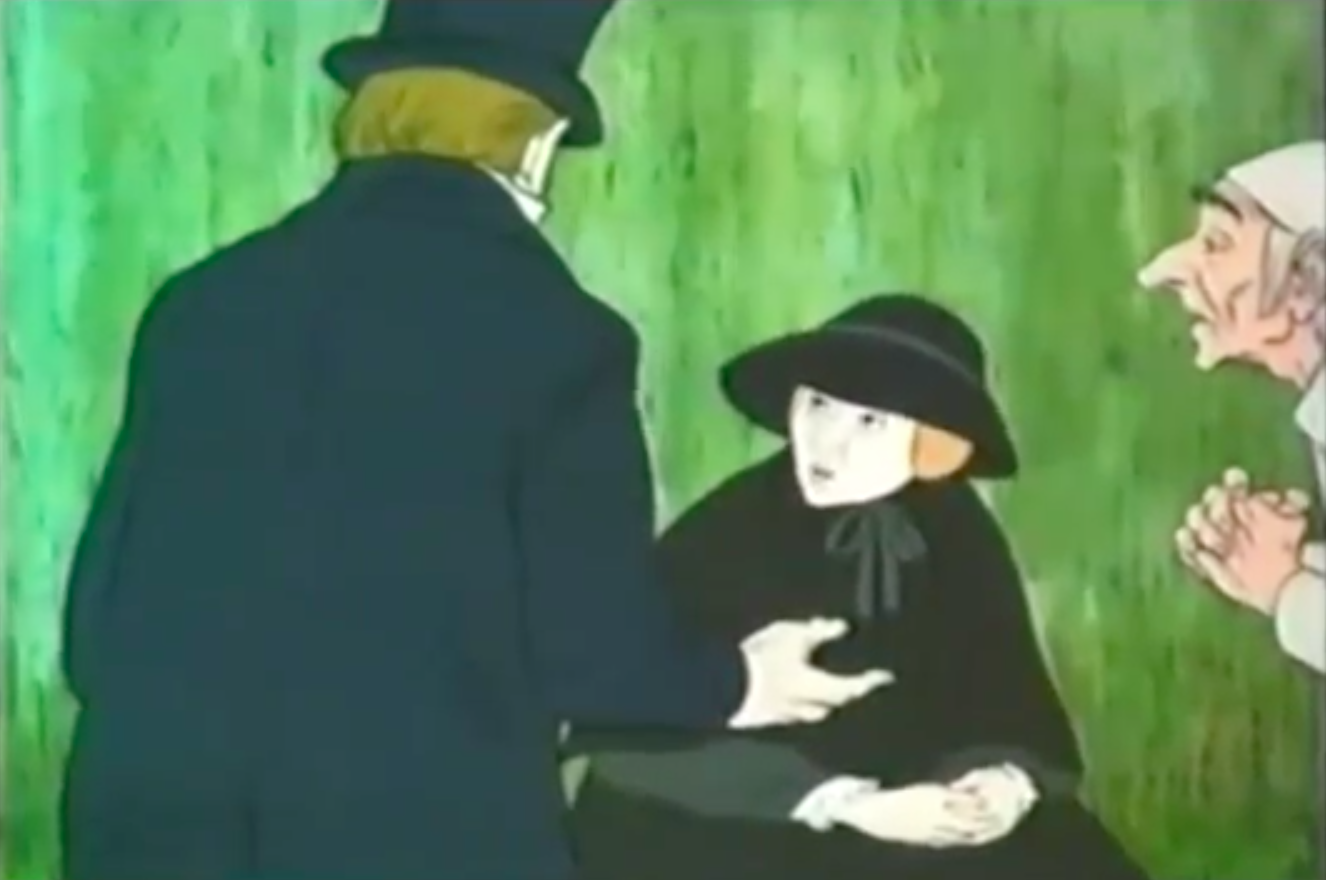 Richard Williams' cartoon places this scene outside, which I like better than the indoor versions. Outside always feels like neutral territory to me and that's a natural vibe for a break-up scene. What's weird about this version is that it takes place in a very green, lush park. It's clearly not winter time, so the Ghost of Christmas Past seems out of its jurisdiction showing this to Scrooge. (Incidentally, the live-action version with Alastair Sim from the '50s also has the Past Ghost showing Scrooge things that didn't take place at Christmas, which also bothers me about that one.)
Belle is wearing a black dress and hood, so she could definitely be in mourning, though she never mentions it in dialogue. Her lines are an abridged version of Dickens' text, so she also doesn't bring up any specific thing that Scrooge has done to make her leave him. He rolls his eyes at her though when she talks about his master passion Gain having engrossed him. If he does that a lot with her, I don't blame her for getting tired of him. And it's clear from his own dialogue that he doesn't disagree about the change in his attitude; he just doesn't see what the big deal is.
Young Scrooge seems mostly annoyed by her. This is inconvenient to him. For her part, she's hunched over in a submissive posture, but she's not backing down. It seems like it's taking a lot out of her to confront him like this, but she's determined to go through with it.
Like in the earlier scenes of Christmas Past, this Old Scrooge continues to be humble and compliant even as he asks why the Ghost wants to torture him. And when the Spirit throws the responsibility back on Scrooge, Scrooge's grabbing the extinguisher cap is an act of desperation, not anger. He puts it over the Ghost's head and the cap disappears along with the Spirit. There's no final flurry of other faces, the park simply transforms into Scrooge's bedroom, having completely skipped the final vision of Belle's married life.

It actually never dawned on me (and I feel dumb admitting it), that the ghosts are ONLY showing Scrooge moments of his life that occurred at or right around Christmas. Actually makes total sense, of course, but I guess I just assumed they were moments from his life that set his bitter course. That these moments all happen at Christmastime makes me understand his aversion to the celebration of the day more than ever. Only took me (almost) 50 years. :)