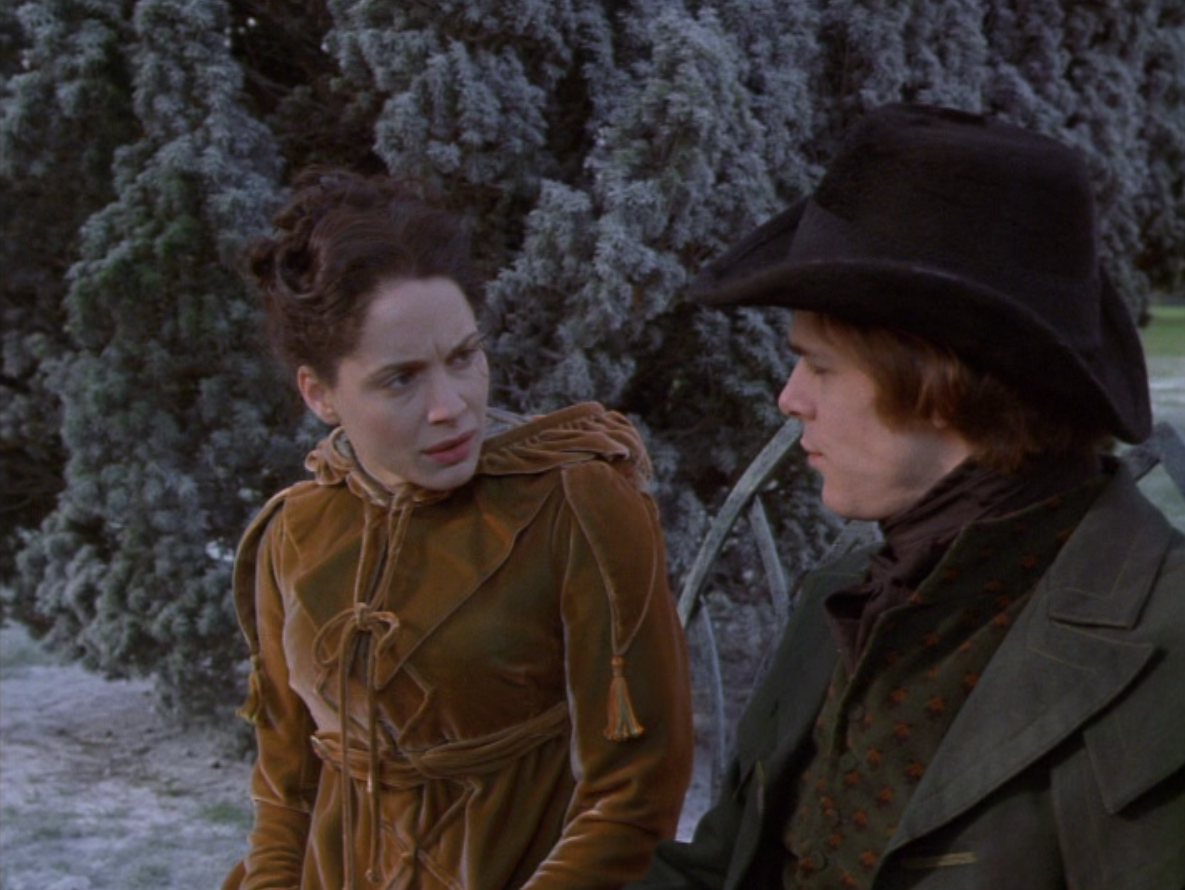 The TNT adaptation of this scene opens with Old Scrooge and the Ghost in the foreground of a park, watching as Young Scrooge and Belle walk towards them along a wet, leafy path. Old Scrooge knows what's coming. "The years change people," he says. "I don't wish to look, sir."
He turns to walk away, but the Spirit grabs him by his clothing and physically turns him back towards the couple. "You must," the Ghost says. It's not quite the manhandling that Dickens describes when the Ghost forces Scrooge to look at the vision of Belle's family, but it's reminiscent of that. And since that second vision doesn't appear in this version, I like the reference.
We cut to Young Scrooge and Belle who are already mid-conversation. She's not wearing mourning clothes, so the conversation hasn't started because of a change in her fortunes. Scrooge is making his "There's nothing the world is so hard on as poverty" speech and Belle tells him that he fears the world too much. We don't know what any of this is in reference to, but I can imagine that it's just a philosophical disagreement so far. She may not have accused him of anything yet.
But she soon does. She crosses the path to a little bench and sits down, explaining that his current philosophy is indicative of his changed attitude about wealth. She's clearly given this a lot of thought - in fact, she says so outright - and is pained by the conclusion she's reached. From her face, she's also rather disgusted by it. Not by him specifically, perhaps, but by his attitude and what it's done to the person she fell in love with.
Young Scrooge is engaged in the conversation. He thinks they're having an argument that he can talk his way out of. But Belle has already made up her mind. The camera keeps cutting back to Old Scrooge who watches all of this with distress. When Belle says that she can finally release Scrooge, his older self cries, "No! No!"
She asks him if he would seek her out and try to win her now if he had it to do over again. He can't answer and looks away from her, but it bothers him that he can't. He realizes that she's probably right, but I don't think he's ever thought about it before. She looks sad as she sighs and nods in understanding. She answers for him. "No."
He still can't look at her, but makes a face and shakes his head. "You think not?" It's a feeble answer.
"I know you wouldn't, my love." There's such compassion in her face and this isn't the last time she'll call him "my love" in the conversation. She really wants this to be going differently.
So does Old Scrooge. He steps forward and pleads with his younger self. "Speak to her!" He looks desperately at the Ghost. "Why doesn't he speak to her?!" Oh, to be able to go back and change this moment.
But Young Scrooge is finally starting to see himself through Belle's eyes and it's awakening him to the person he's become. He scowls thoughtfully, but doesn't argue with her anymore.
She finishes her goodbyes and leaves. Old Scrooge tells his young self to go after her and - surprisingly - the young man leans forward to stand up. But he catches himself and sits back.
"Don't be afraid!" Old Scrooge cries, literally. "Go after her!"
Belle even looks back at Young Scrooge a couple of times to see if he'll come, but he's made up his mind now. She eventually disappears into the fog and snow.
Old Scrooge has now had enough and demands to be taken home. Which, surprisingly, the Ghost immediately does. They're immediately back in Scrooge's house and he's climbing the stairs as the Ghost stands at the bottom and watches Scrooge walk away.
I've loved the emotion in this version and the performances are excellent all around, but the scene ends in a weird way that I don't care for. Scrooge is headed back to bed and the Ghost is just letting him go, but Scrooge stops on the stairs and turns back around. "Haunt me no longer!" he screams. It's weird, because I get the impression that the Ghost is already done haunting him. The visions are over and Scrooge is free. Why the outburst?
The Ghost, cryptically, just shakes his head. He could be saying, "No, I won't bother you anymore," or, "No, I'm not listening to you; there's more to come." I don't know that Scrooge even understands, but apparently what's bothering him is that the Ghost is even still there. He hurries back down the stairs, grabs the Ghost's extinguisher cap, and forces it down over the Ghost's head.
It's a struggle for Scrooge. The Ghost isn't visibly resisting, but Scrooge still has to put a lot of effort into getting that cap to the floor. And even when it's there - like in Dickens - light still spills brightly out from around the base. It's so much light that Scrooge even has to put up his hands to shield his face from it.
He's still doing that when the shot fades to black (for a commercial break, I assume). When we come back, Scrooge will be asleep in his own bed.
at December 21, 2020

I like George C. Scott's performance, but Stewart truly inhabits the role of Scrooge in a deep way. This scene is great, and he is a big part of why. I know that is obvious, but he just elevates things he is part of.