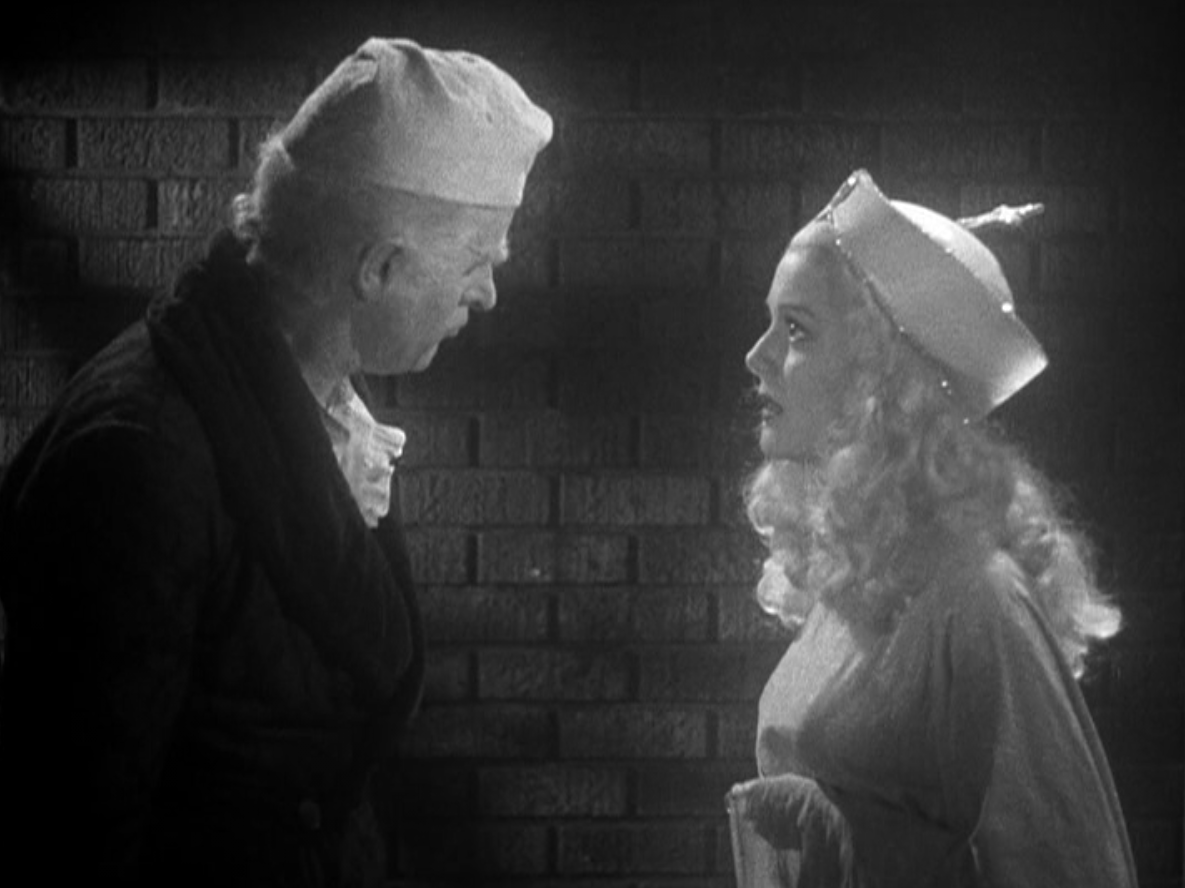 The 1938 Christmas Carol cuts Belle out of the story altogether. It also heavily modified the Fezziwig scene to eliminate the party while still showing Fezziwig's loving management of his employees. This version added some extra story at the beginning with Scrooge's nephew running into Bob Cratchit's kids and then having a visit with Bob, and eventually with Bob's getting fired for accidentally ruining Scrooge's hat with a snowball. We've apparently got to make that time up somewhere, so this is where the adaptation cuts a couple of corners. When the Ghost declares at the end of the Fezziwig scene that her time is running short, she's not kidding.
Scrooge was already cranky at the end of the Fezziwig conversation, regressing a little in the progress of his transformation and getting defensive about how he's a good business man. The Spirit loses patience with him about that and sums up the rest of what she was planning to show him: "I've yet to show you the black years of your life: your gradual enslavement to greed, your ruthlessness, your ingratitude, your wretched thirst for gold!"
Scrooge protests through all of this and shouts for her to leave him. He's been confronted - and I think convinced - that he needs to change, but this is a big step backward. The Ghost of Christmas Present in this version is going to have more work to do than his counterparts in other adaptations where Scrooge made more progress in the Past.
This Spirit of Christmas Past hasn't carried an extinguisher cap, but Scrooge is so angry and desperate that he grabs her skirt and throws it over her head. It's super awkward, but thankfully the camera stays on Scrooge and we don't actually see the Ghost as she's assaulted. Scrooge simply yells that he can't stand any more as the scene dissolves from his clutching the Ghost's clothing to him in his bed trying to strangle his own bedsheets.
at December 15, 2020

Need the Belle story, I think. Adds a lot to what Scrooge has lost.

I agree. Especially after seeing the Albert Finney version again. It's central to his need for change. The schoolhouse and Fezziwig scenes both build to it and the break-up is the payoff.