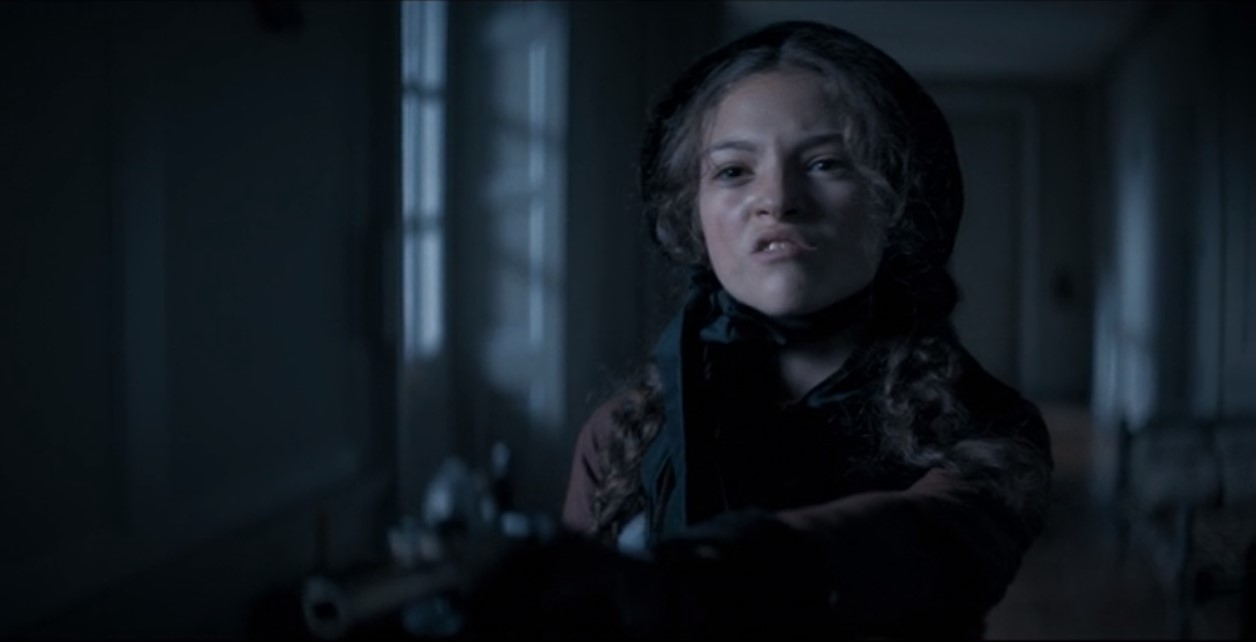 There are a couple of big changes in Chapter Two of the FX Christmas Carol, but before I get to those, the biggest surprise was that it only covers part of the Ghost of Christmas Past, leaving the rest of that Ghost and the other two Ghosts for the third chapter.
I guess that makes sense with Chapter One's having Marley receive his orders from Christmas Past. That spirit seems to be running the show here. I'm curious how big a part the other two spirits will even play. All three are needed in Dickens' story, but this one seems to have Past doing the heaviest lifting.
And heavy lifting is needed. Scrooge is openly defiant of the spirits in this version, literally challenging them to change him as he actively resists. It's a little weird, but I don't hate it. His openness about what he's thinking and feeling should make it easy to see where the most powerful transitions come.
The huge change in the schoolhouse scene is that Scrooge's father hasn't just neglected his son, he's prostituted him to the schoolmaster in exchange for free tuition. Scrooge's dad has gone bankrupt and sounds like he was a pretty awful person even before the stress of losing all his money. Instead of allowing Scrooge to come home for the holidays, he has Scrooge stay at school where the schoolmaster can abuse him.
So when Scrooge's sister (renamed Lottie in this version for some reason) comes to bring Scrooge home, she comes with a gun. Dad isn't kinder than he used to be, he's dead, opening the door for Lottie to mount a literal, heroic rescue. Young Scrooge doesn't see all of this though. He knows about how evil his Dad was, but doesn't realize just how much risk his sister took because she loved him.
The lesson Young Scrooge took from this fits with what Belle tells him in Dickens' book. She says that he "fears the world too much" and here we see why. In the book, we see his loneliness and there's a light connection between that and poverty. Old Scrooge pursues wealth as a way of gaining control over his life, though, ironically, it makes him just as lonely as he was back at the school. For better or worse, the FX version is less subtle, closely tying Scrooge's fear to the powerlessness of being poor in a horrible, dramatic way.
This version skips Fezziwig entirely to focus on Scrooge and Marley's heartless acquisition of businesses to either dismantle and sell them for a profit or to cut expenditures to the point that they endanger the lives of their workers. It's all very timely stuff and also very on-the-nose, which are also both descriptions of this adaptation as a whole. Again, for better or worse. I feel like it works in some instances and doesn't in others, but I can definitely see why viewers are divided about whether or not they like it.
The chapter ends with the revelation of where Mary Cratchit got that money she needed for Tiny Tim's operation seven years ago. Bob was too proud to ask Scrooge for it, so Mary went privately with a proposal to garnish Bob's wages until they were able to pay Scrooge back. Scrooge rejected that plan, but proposed one of his own, which would prostitute Mary for the money. He claims that it's an experiment in morality; he wants to see which is worth more to her: her fidelity to Bob or the life of her son. As the chapter ends, she's agreed to Scrooge's indecent proposal, but we'll have to wait until Chapter Three to find out exactly what happened (though we know that she did get the money).
I'm curious to see how this all wraps up. Scrooge is a monster in this one. That's tempered by his love for animals, but I've never seen a version of him this nasty or resistant to change. I truly don't know what to expect from his transformation and wonder how complete it will even be.
at December 23, 2020