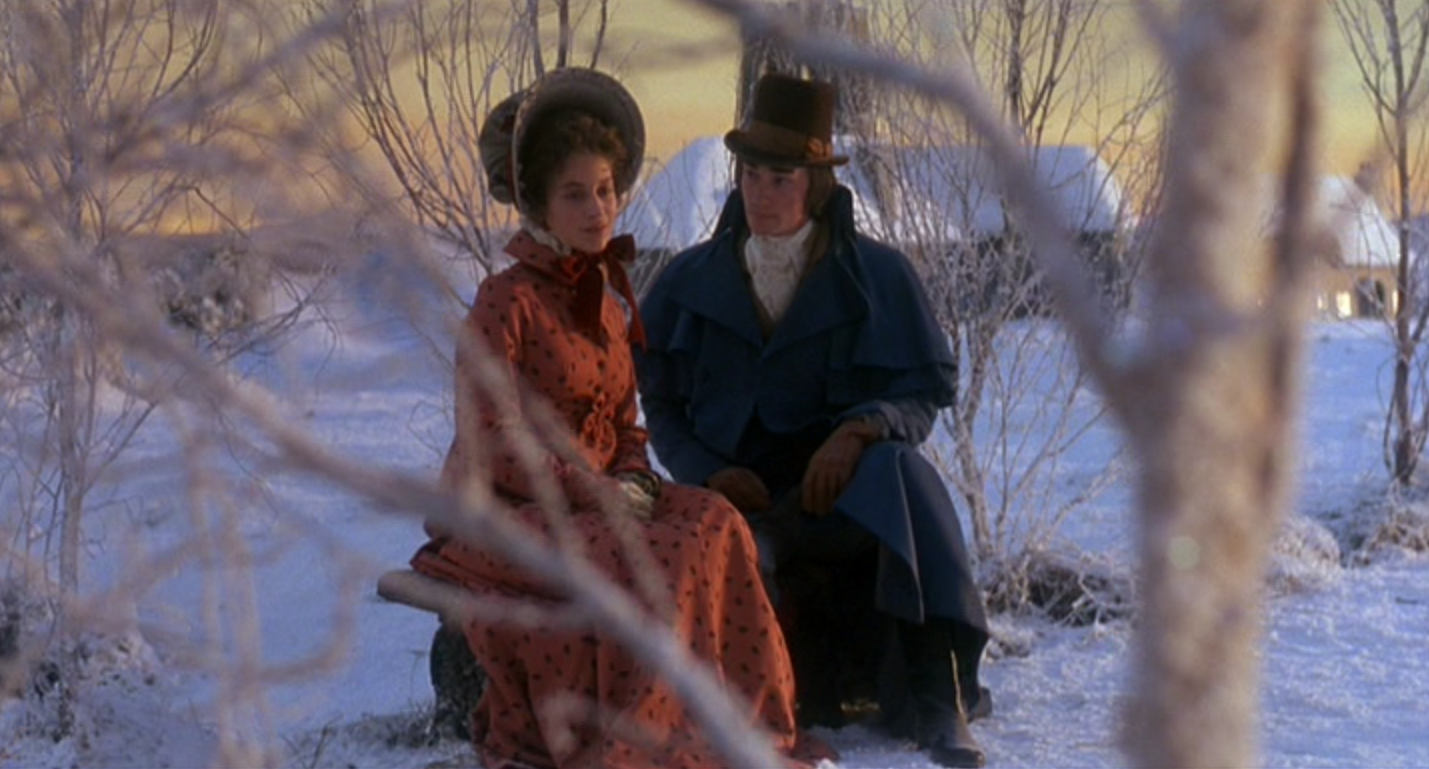 Like so many other versions, The Muppet Christmas Carol introduced Belle at Fezziwig's (I'm sorry, "Fozziwig's") party and has the breakup scene out of doors. As introduced at the party, this Young Scrooge came from a miserable home where he didn't feel loved, so he gets his sense of value from succeeding at work and accumulating wealth. Fozziwig called him "the finest young financial mind in the city" and I sense that this version of Scrooge is sort of a prodigy when it comes to business. So much so that he wasn't able to fully enjoy Fozziwig's party because he saw all the red it put in the accounting books. Now that same business genius is going to keep him from fully enjoying or appreciating Belle.
When this scene opens, Belle is complaining that he's put off their wedding for another year. And we'll find out during the conversation that it's not the first time. She's not wearing mourning clothes, so instead of her parents' recently dying, it sounds like this new delay is the reason for her deciding finally to end things.
Young Scrooge is pretty patronizing when he tells her that the delay can't be helped, like he's explaining it to a child. They don't have enough money saved away for a decent home; his investments haven't paid out like he hoped. But she's heard all of this before.
She points out the progress that they've made. He's a partner in his own firm now. But he claims that they're barely clearing expenses. She thought the partnership was the goal, but he keeps coming up with extra reasons to hold off the marriage. He claims that he loves her and that he's doing it for her, but she's run out of patience.
This is a serendipitous year to be talking about this scene, because the Muppet version of it has a complicated story. As originally shot, Muppet Christmas Carol included a song called "When Love Is Gone" in this scene. After Young Scrooge insists that he does love Belle, she says, "You did once," and begins to sing:

During all of this, she gets up and moves away from him. He follows her a couple of times, but finally she moves away again and he stays put, ultimately turning and walking away to leave her alone to finish the song.

At this point, Old Scrooges walks into the frame behind her to join her in a duet.

Or he tries to, anyway. He breaks down about halfway through, weeping openly as she finishes alone, looks back at the direction Young Scrooge has gone, then walks away herself. It's super emotional and gets me every time. And it's no wonder that when Belle passes Gonzo and Rizzo, Rizzo is sobbing his tiny little eyes out.
The problem was that Disney's Studio Chairman at the time, Jeffrey Katzenberg, thought the scene was too emotional and adult for kids to sit through, so he had it cut from the theatrical release. It was added back in for the VHS release, but the footage was lost shortly after that. So on my DVD copy, I have the choice of either watching the widescreen theatrical release without the song, or a crappy pan-and-scan VHS transfer with the song. Frankly, I usually choose the widescreen version, but it's always jarring to go from Belle's "You did (love me) once" to Rizzo's passionate bawling. It's still a sad scene without the song, but it's so much more powerful with it.
And that's before we even bring up the reprise/sequel of "When Love Is Gone" at the end of the movie, retitled "When Love Is Found." Again, it works just fine without knowing that there was an earlier version of the song that the finale is mirroring, but it's way more effective with that balance intact.
Happily, this year the scene (like Love) was found and is going to be added back into the movie for its 4K remaster release.
Getting back to the movie, the Ghost doesn't show Scrooge a final vision of Belle's family without him. He still has tears in his eyes as he pleads, "Spirit, show me no more." And he adds, "Why do you delight in torturing me?"
He resents it when she reminds him that these visions are what they are because of his own decisions. "Leave me!" he says, angrily. And she does without argument or his having to attack or extinguish her. She just disappears as the vision darkens and he's returned to his bedroom.
at December 20, 2020

Serendipitous, for sure. Great version of the scene and the song so belongs in place. Glad it is being restored.