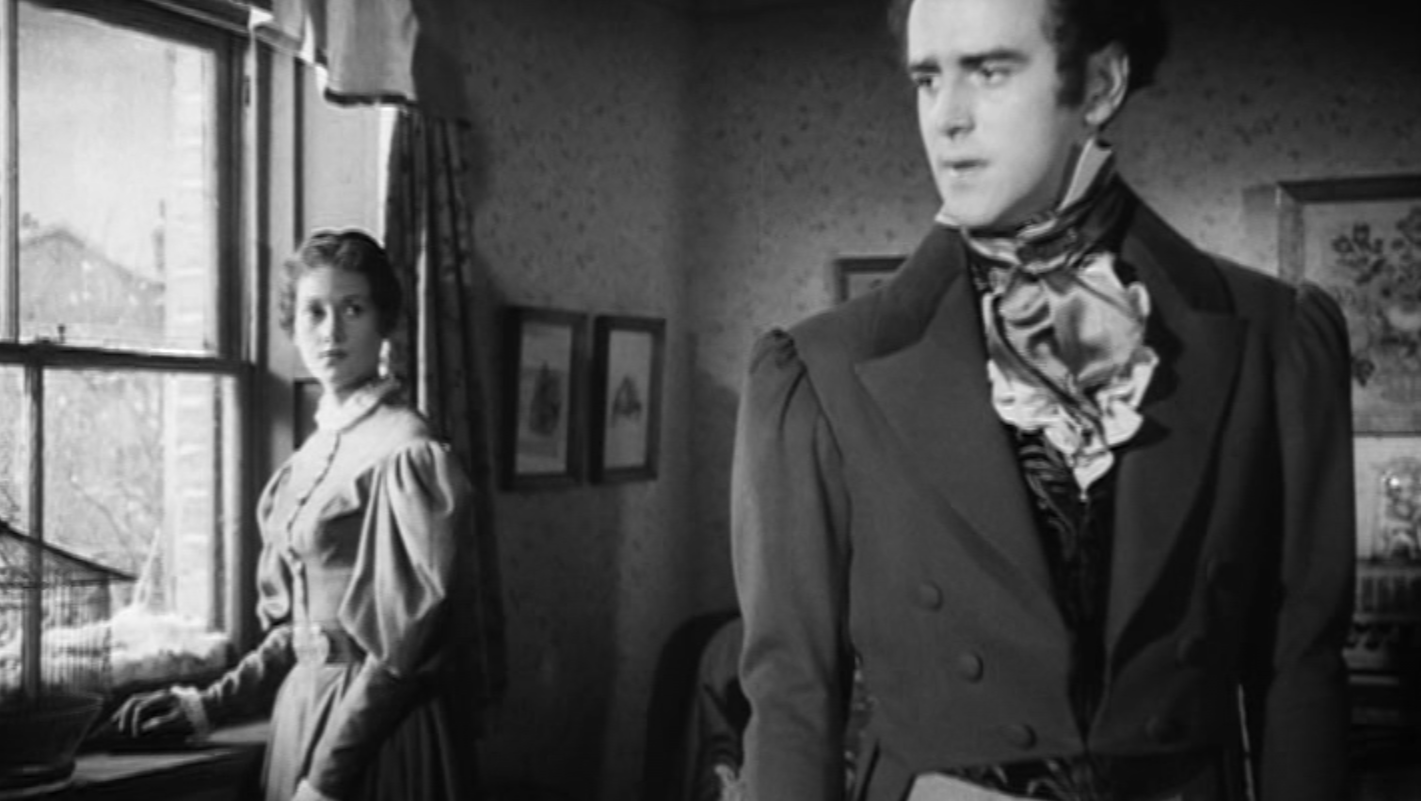 It's funny to me that after the Reginald Owen Christmas Carol skips this scene altogether, Alastair Sim's classic version more than compensates with a super extended look at not just Scrooge's fiancée, but a bunch of other stuff from Scrooge's past, none of which is in the book.
I remember the first time I watched this version. I was entranced by all of these apocryphal scenes. I'll run through them in a minute, but I loved the additional backstory and how it fleshed out Scrooge's descent into greed and misery. These days, having seen this version so many time, I get a little impatient with the extra material, but I'm still glad that someone decided to go there and fill all that in. (Although, like with the animated Sim version, it's hard to believe that all of these scenes take place at Christmas, so the Ghost feels out of bounds showing it.)
Before we get to the break-up scene, the Spirit shows Scrooge the following things:
Doing this project, I feel like I'm finally getting a handle on the Spirits' tactics and why they're effective on Scrooge. It has to do with his abandonment and neglect as a child and his fear of ending up like that again. His accumulation of wealth is all about control, which is why he's a miser with it (and also why you'll never catch Scrooge sliding on ice - voluntarily giving up control - the way other characters do in the various versions). Scrooge doesn't crave money so that he can spend it. He needs it so that he can feel secure. And he's instinctively suspicious (and I think, deep down, extremely jealous) of people like Fred who are willing to give up that safety net for love.
Dickens is pretty subtle with his clues though, so I understand the desire for a movie like this to try to spell things out a little more clearly. Instead of Scrooge's dislike of Fred being out of jealousy for Fred's loving marriage, it's because of a side plot about Fan's death. The stuff about Jorkin and Fezziwig stays on point though and I think gets across the idea that Scrooge is making these decisions out of fear.
At this point, we see Alice (this movie's version of Belle) break up with Scrooge. The vision opens with her staring out a window in a house as the Spirit declares that "she is not changed by the harshness of the world." She's chosen love over fear.
She's not wearing black and doesn't appear to be in mourning, but one of the nice things about this version is that we've actually got to see Scrooge's gradual change in his attitude towards the world. Their conversation makes even more sense in the context of the preceding scenes.
There's a big change in the dialogue that continues the adaptation's trend of humanizing Scrooge. When Alice asks if he'd still propose to her today if he hadn't already agreed to it in the past, he hesitates, but declares, "Of course I would." That's much different from his non-answer in the book where he puts it back on her with, "You think not."
She doesn't believe him though and releases him. He angrily snatches up her ring where she's left it on a table, saying that he must bow to her conviction. He's ticked at her for breaking up with him and I don't think it's just wounded pride. I think he still loves her and wants to make it work, but she's forcing the issue because he's going down a path she can't accompany him on. Some of the other versions suggest that she's presenting him with a choice: money or me. And he chooses money. This feels more real than that. She's not offering him a choice, she's just breaking it off and he can't do anything but accept it, which is super painful.
This is apparently her house, because he storms out and leaves her there by herself where she breaks down. This is another aftermath that Young Scrooge never witnessed, but Old Scrooge has to. Like in the book, he tries to get out of seeing any more, but the Ghost declares that they're not done yet. Instead of peeking in on what happened to Alice though, we have some more scenes from Scrooge's life:
With this last vision, the scene dissolves back to Scrooge's bed where Scrooge is now lying and moaning in his sleep, "No no no no no..."
at December 16, 2020

Appears that they not only added scenes, but put work in to making them relevant and meaningful, adding to the backstory of Scrooge and his sad journey. Well done, I think. Most would see it as almost sacrilege to try and add to a classic like this, but this seems done with good intention.

Funny, your thoughts on Scrooge's motivations for his miserly ways. Feels very true and more fleshed out, rather than just 'he was selfish'.

I was thinking the other day when dealing with an unexpected expense that life would be easier with a windfall of funds. But then I pushed myself further, and realized even with more money, I would find some way to be worried about that and there might never be any true peace to be found. I don't know. Mind wanders.

I think you're so right.