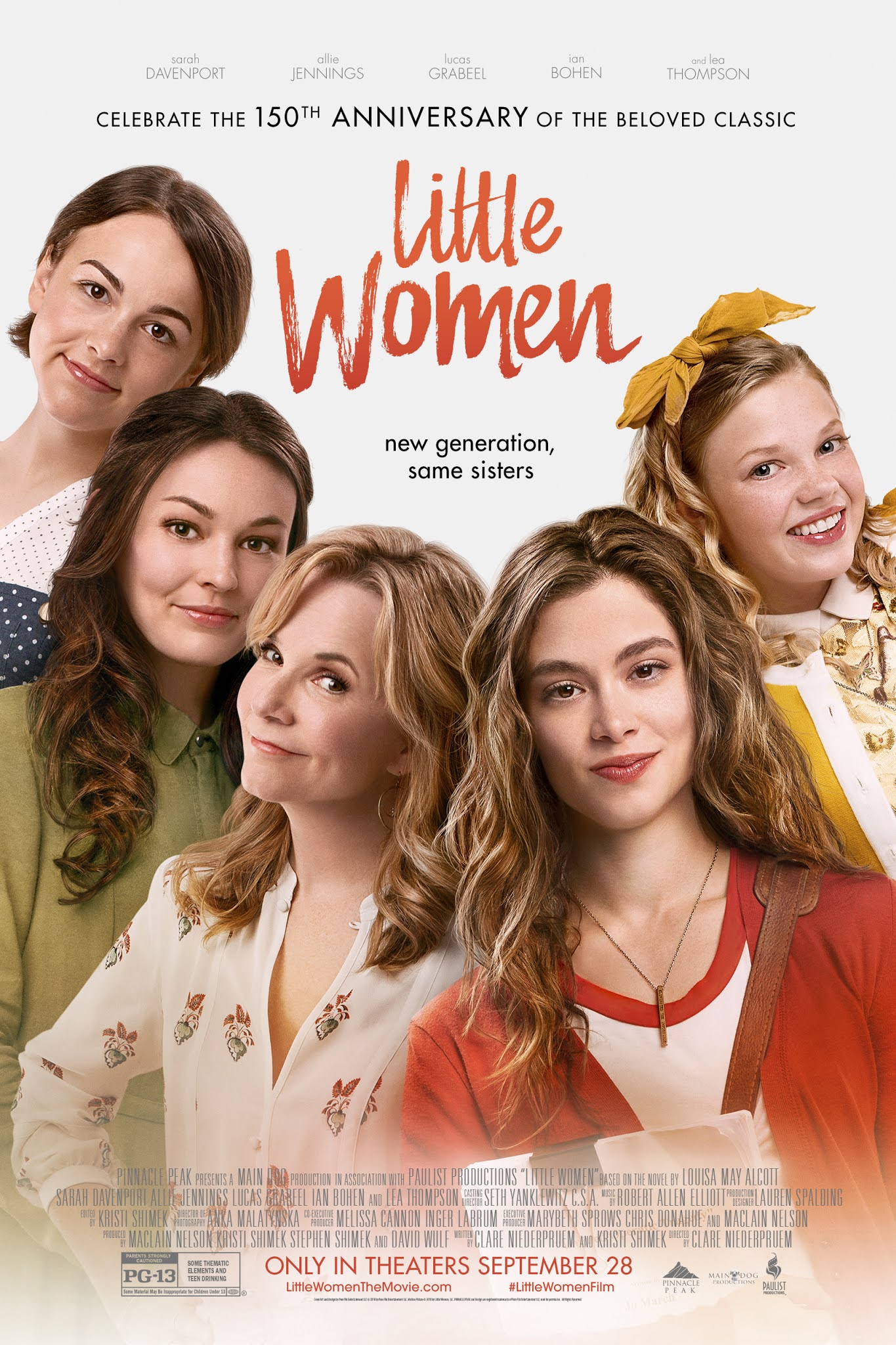 Adapting Little Women to a modern setting sounds complicated and possibly ill-advised, but I looked forward to the experiment for the same reason that I don't complain about remakes and reboots. I'm always curious to see what artists choose to keep and what they change. And that's especially true in a story where the Civil War, small pox, and Nineteenth Century women's roles play such huge parts.
Director Clare Niederpruem and her co-writer Kristi Shimek do a great job of updating the historical elements. Pa March is now a military surgeon deployed in the Middle East. Amy falls from a horse instead of through thin ice. Instead of catching small pox from a neighbor family, Beth contracts leukemia that goes into remission before eventually coming back. Instead of balls, there are high school parties and proms. That all works really well and I was fascinated by the modernizations. The only thing I scratch my head about is Jo's relationship with Professor Bhaer who appears to be her actual college professor? If that's right, there are some ethical questions that the movie never addresses.
What really doesn't work though is the extreme focus on Jo to the point that the film is only interested in how the other characters affect her. Laurie's grandfather only spends time with Beth in a quick montage and the whole Amy/Laurie romance happens completely offscreen. I would have loved to see Lea Thompson do a lot more with Marmee (weird that the movie keeps that outdated nickname), but she never gets the chance.
Even more frustrating, as obsessed as the movie is with Jo, it doesn't think about her nearly as much as she thinks about herself. This Jo is completely self-absorbed, mean, destructively angry, and has a laughably juvenile concept of what it means to Write (capital W; back of hand to forehead) that she carries well into her college years where she should have learned better.
The point of the film is to watch her grow out of that, but I still think it takes the character too far. The book's Jo matures from writing pulp to creating personal stories with artistic merit, but she's also always aware of the difference between the two. She just prefers pulp and has to grow into appreciating literature. In this movie, Jo believes that her 400-page YA mythopoetic epic (or whatever she calls it) is Literature and it's embarrassing to watch her finally realize the truth about that. Especially after she's been such a stubborn jerk about it for so long.
On the other hand, the cast is pretty great. Sarah Davenport brings out Jo's feistiness, but also her eventual regret and desire to change. Allie Jennings is super cute as homebody Beth who fights to keep her humor even when she's really sick. Elise Jones plays the younger version of Amy as an obnoxious preteen and I really like the hints early on that she has a crush on Laurie. It makes it a bit easier to believe their later relationship, even though there's less reason to understand why he's fallen in love with her. Lucas Grabeel is charmingly nerdly as Laurie, a kid who'd get picked on at school if he wasn't so stinking rich and self-confident. I liked him a lot and wish the film had a kinder Jo for him to fall in love with.
One final note as I head towards Greta Gerwig's adaptation: unless I'm forgetting something, this is the first version to start the story with Jo in New York and reveal the previous events in flashback. I think that's a smart way to remix the story and keep it interesting for modern viewers. Gerwig does it too and gets even better results.
Three out of five Skypes from Father. 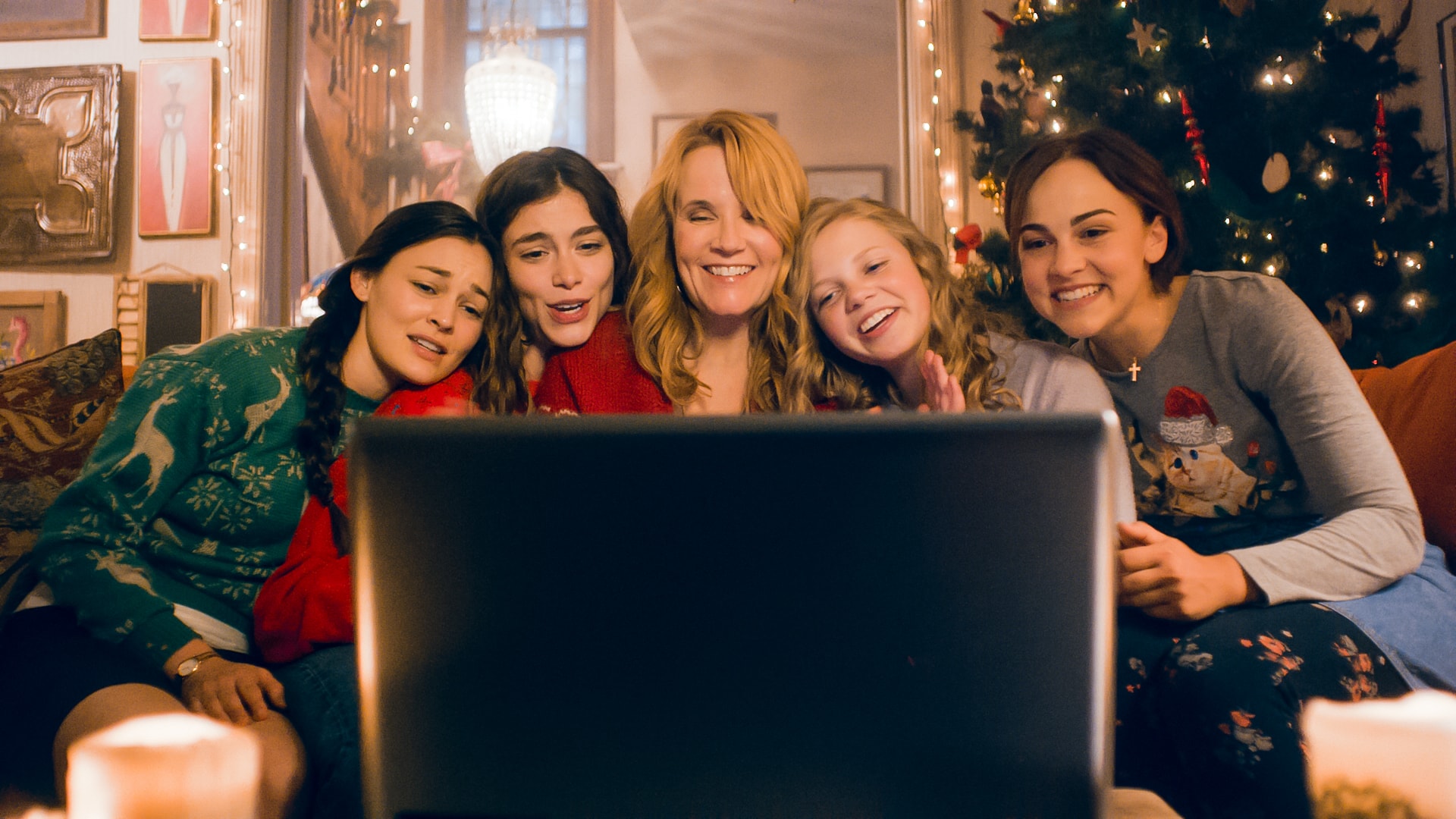 I'm often amused when it comes to adapting an older literature/stageplays to modern settings. This was the glut of teen movies from the 90s; 10 Things I Hate about You, She's All That, Romeo + Juliet, etc. A modern set version of Little Women feels inevitable.

Remember the lead character in "Seven Year Itch" was repurposing Little Women as "Secrets of a Girl's Dormitory", so we really should have seen this coming.

Ha! I forgot about that Seven Year Itch gag. Hilarious!