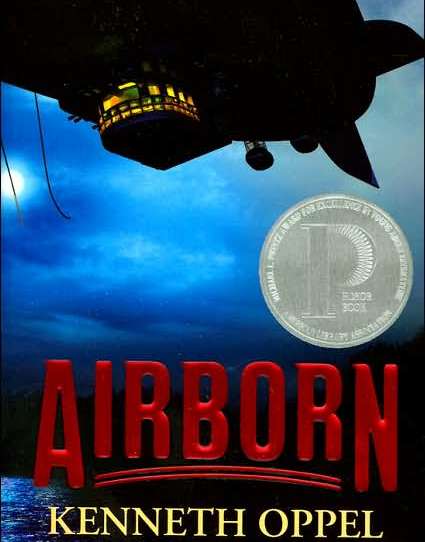 For those who don't know, I have a rule for reading novels that I totally stole from Bookgasm: "If it’s not good by page 100, quit reading." I've used it four different times that I can remember and as I approached the hundredth page of Kenneth Oppel's Airborn, I honestly wasn't sure if this would be the fifth. SPOILERS BELOW (and not all from just the first 100 pages)

The book is set in an alternate reality in which airplanes were never invented and giant airships are the way people travel around the world. Matt Cruse is a cabin boy on such an airship, the Aurora. His father also sailed on Aurora before he died and Matt's dream is to work hard and eventually to rise even further in the ranks than his dad did.

Unfortunately for Matt, the owner of the shipline is displeased with the business sense of his son and has decided to punish him by putting him to work as an apprentice sailmaker on the Aurora. The very job Matt was hoping to get. One boy's punishment is Matt's missed opportunity for promotion, even though the Aurora's captain admits that he'd prefer Matt in the role.

It's hard to know what to make of Matt. He's overly perfect and that bores me. He's likable enough and not cocky, so I don't hate him, but everyone on board the airship loves him and he has precious few flaws. He also has no fear of heights, which - while a personal thing - is something that I can't relate to. He talks about being confident that if he were to fall out of an airship that the air itself would somehow lift him up. I'm not making fun of him - I see that Oppel's just trying to describe Matt's fearlessness in a way that keeps his endearing humility intact - but it's still completely foreign to me and I'm having a hard time buying Matt as a real person. I'm doing it, but with difficulty.
Matt's career is only a sub-plot though. The real story is a mystery concerning some as-yet-undiscovered air creatures. As the novel opens, Matt's on watch in the crow's nest and spots a small hot air balloon in distress. The Aurora moves in for a rescue attempt (that Matt achieves), but is too late to save the life of the balloon's elderly pilot. He dies, but not before whispering cryptically to Matt about the mysterious creatures.

A year later, the pilot's extremely wealthy, young granddaughter travels aboard the Aurora with a chaperon. Her secret reason for the trip, revealed to Matt once she learns his connection with her grandfather, is to retrace the old pilot's course and hopefully discover the creatures that obsessed him.

Though rich, granddaughter Kate is down-to-earth and kind. She's also pretty and adventure-loving. In short, she's just as perfect as Matt. Even her chaperon is perfect. Perfectly snooty anyway, as all older chaperons to pretty, young, rich girls must be in books.

And that's as far as I've got. A couple of likable, but not particularly captivating characters and a mystery that I don't especially care about either. Mysterious sky creatures? So what? The only reason I'd care about them is if I knew more about Grandpa. Why did he care about them? Why are they important? Matt's about to read the old man's journal, so maybe that'll solve the problem, but that comes after page 100. If I don't care by now, should I keep going?

Based solely on what I've read so far, the only thing that really interests me is the shipline owner's son. Rather than an arrogant, entitled jerk, he's self-deprecating and embarrassed by his father. Which makes Matt the jerk if he's going to continue to resent the other boy. I don't know that Matt will - he's already started to ease up in his animosity - but the question is the most interesting thing about Matt in a hundred pages. I suspect that Matt will forgive the boy and focus his energies elsewhere, but that's partly because I've cheated a little.

If I was going to obey the 100-Page Rule by the letter, I'd have to put Airborn down. It's not "good" by page 100. But the next book on my reading list hasn't arrived at the bookstore yet and Airborn isn't bad either. The potential for improvement is there; it may just be slower than it needs to be in getting there.

So, I did some research; read some reviews. There are pirates coming. And a shipwreck on a deserted island. That sounds good. Maybe I'll read that far and see if I care about Matt and Kate by then.

Unfortunately, I've also learned that Matt will apparently decide to go to school to improve his chances of promotion. That's why I suspect his relationship with the shipline owner's son will become a moot point.

School costs money that he doesn't have though. If only he knew someone rich...

For every potential enticement to keep going it seems that there's something making me nervous. This is a Young Adult novel and it looks like that doesn't include All-Ages. I should put it down.

But again, I don't yet own the next couple of books on my reading list. I think I'll check on them and keep reading in the meantime. Get through the shipwreck at least. See if the journal increases my interest. See if the pirates are cool.