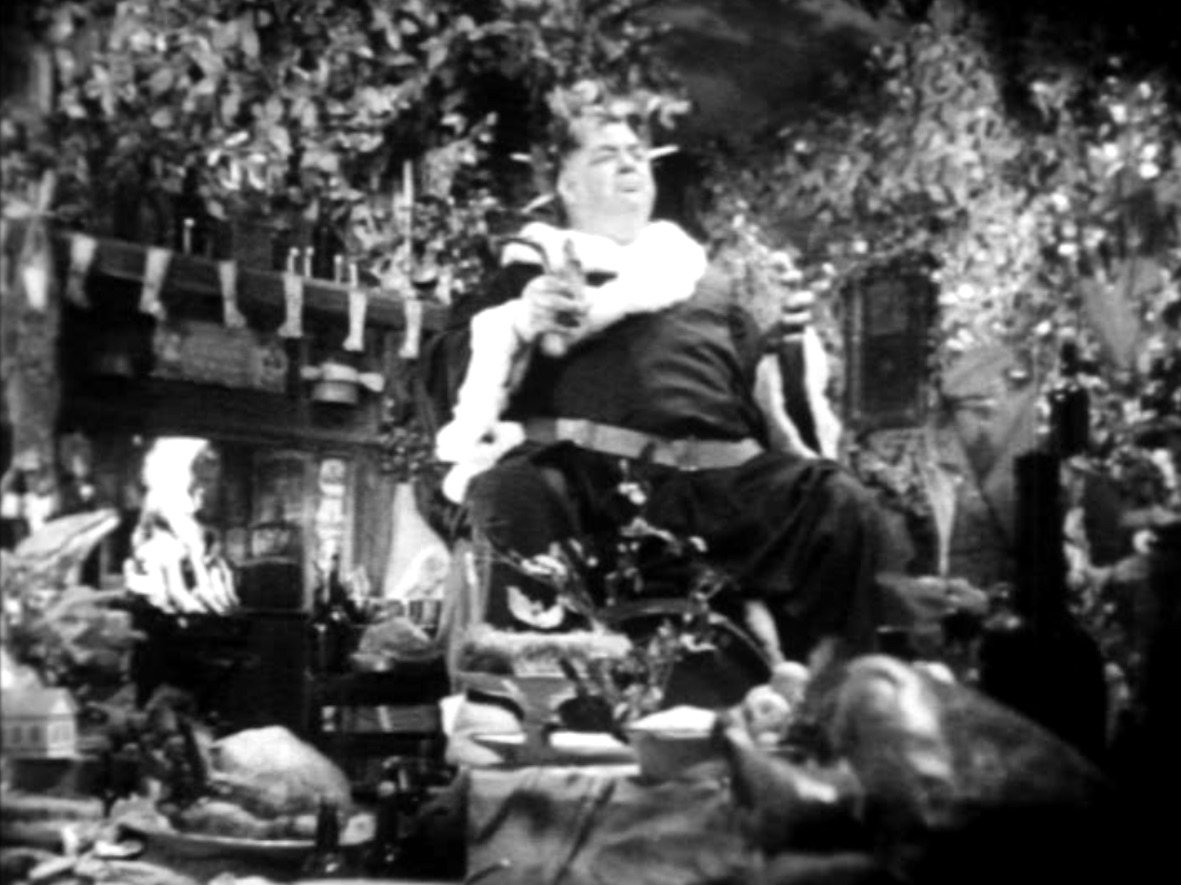 In Henry Edwards' Scrooge, Seymour Hicks' Ebenezer wakes up in his bed before the strike of One and even predicts the tolling of the bell before it comes. I haven't been impressed with this version so far, but it does this part of the scene nicely, having Scrooge look around the room as if he expects something and then pulling the bedsheets over his head when nothing happens right away.
He peeks out again just in time to see the lighting change and flicker wildly. So he gets up and goes to the other room where he sees the new ghost.
I'm not as excited about the actual Ghost in this version, but that's not a surprise considering the invisible Marley and the blurry Ghost of Christmas Past. At least this one is corporeal, but Edwards has taken big liberties with its appearance.
The room is impressive though with a blazing fire in the fireplace, stockings hung on the hearth, and greenery and food everywhere. The Ghost is sitting on a raised surface above the feast and appears quite large in more ways that one. At least he does until Scrooge walks over and stands next to him to provide some perspective. Scrooge is as tall standing up as the Ghost is sitting down. He's fat, but he's no giant.
He doesn't have room for a torch of any shape because he's got two fistfuls of food that he gnaws on throughout the scene, pausing to smack between lines of dialogue, then tossing his meat on the floor to pick up a goblet. He's probably shirtless under his robe (white-furred and presumably green, but it's a black-and-white film and that's impossible to tell). The robe is pulled tight around his neck though, so no broad, bare chest here. And his hair is all wrong from his short haircut to his beardless face.
I don't think we ever get a good enough look at the Ghost when he's standing to tell if he's barefoot or carries a sheath, but this version finally puts icicles on the holly crown. They're big ones that poke out in all directions like spikes.
This Scrooge has been a passive, defeated character almost from the beginning of the ghosts' visits. He's been one of the quickest to change and it's natural that he gets to say the line about having learned a lesson which is still working on him. In fact, he says this with hands together as if he's praying, so he's quite penitent.
The Ghost then invites Scrooge to touch the Ghost's robe and explains that he's about to show Scrooge how his poor clerk keeps Christmas. Scrooge already looks ashamed and hesitant about this, so the Ghost commands again, "Touch my robe."
Scrooge lifts his hand dramatically and lays it on the Ghost's sleeve. Smash cut to the next scene.
at December 17, 2021

He looks to me to be less festively abundant and more like, I don’t know, Jabba the Hut-ish.

Ha! Accurate. I didn't mention it, but his performance is sort of Jabba-like as well. He's sort of humorously frowny.