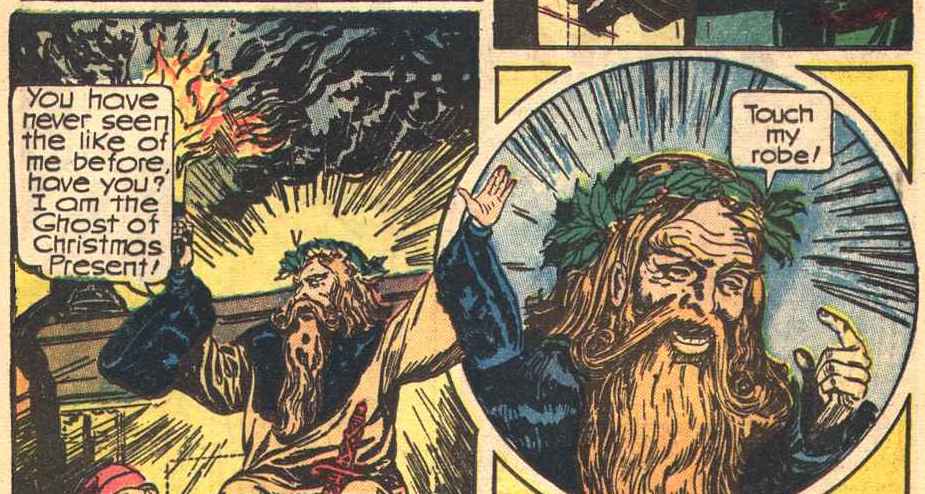 The Classics Illustrated adaptation starts this scene with Scrooge's waking up in bed and immediately seeing a light in the next room, so Scrooge doesn't have to pull back his curtains and wait nervously for whatever's about to happen.
He spends the next panel opening the door to the other room and then the bottom two-thirds of the page are taken mostly with the grand depiction of the new Ghost in all his glory.
The sumptuous feast from the book is there, but I can't tell if the Ghost is sitting on a throne of food or if he's brought his own chair. He's certainly giant-sized and has the long hair and holly crown of the literary version, but there are no icicles on the crown and the adaptation takes other liberties with his appearance.
He has a torch, but it's just a regular old torch and not cornucopia shaped. He has the sheath, but there's actually a sword in it, which directly contradicts Dickens. The Ghost's beard covers his chest, so we can't know for sure, but we can imagine that he's shirtless under there. Likewise, his long robe covers his feet and there's no telling if he's barefoot or not. But he could be.
The most noticable change is the color of the Ghost's robes. Rather than being green with white fur trim, they're light orange with black fur trim. They're pretty striking and I love the black fur trim, but they're not very Christmasy.
Scrooge hasn't shown strong signs of change up to now, but - true to Dickens' text - he tells the Ghost that he learned a lesson the previous night and he's willing to profit by whatever this Spirit wants to teach him. This version of Scrooge was especially mean and businesslike early in the story, so it's nice to see that the small hints of change that he let show throughout Past's visit are signs of something bigger going on in Scrooge's heart.
This version of the Ghost of Christmas Present does invite Scrooge to touch his robe. We don't see Scrooge do it, but we can assume that Scrooge takes that action since the narrative text tells us that "immediately the room vanished and they stood on the city streets on Christmas morning."
at December 06, 2021

Definitely has the look I am used to for this particular Spirit.