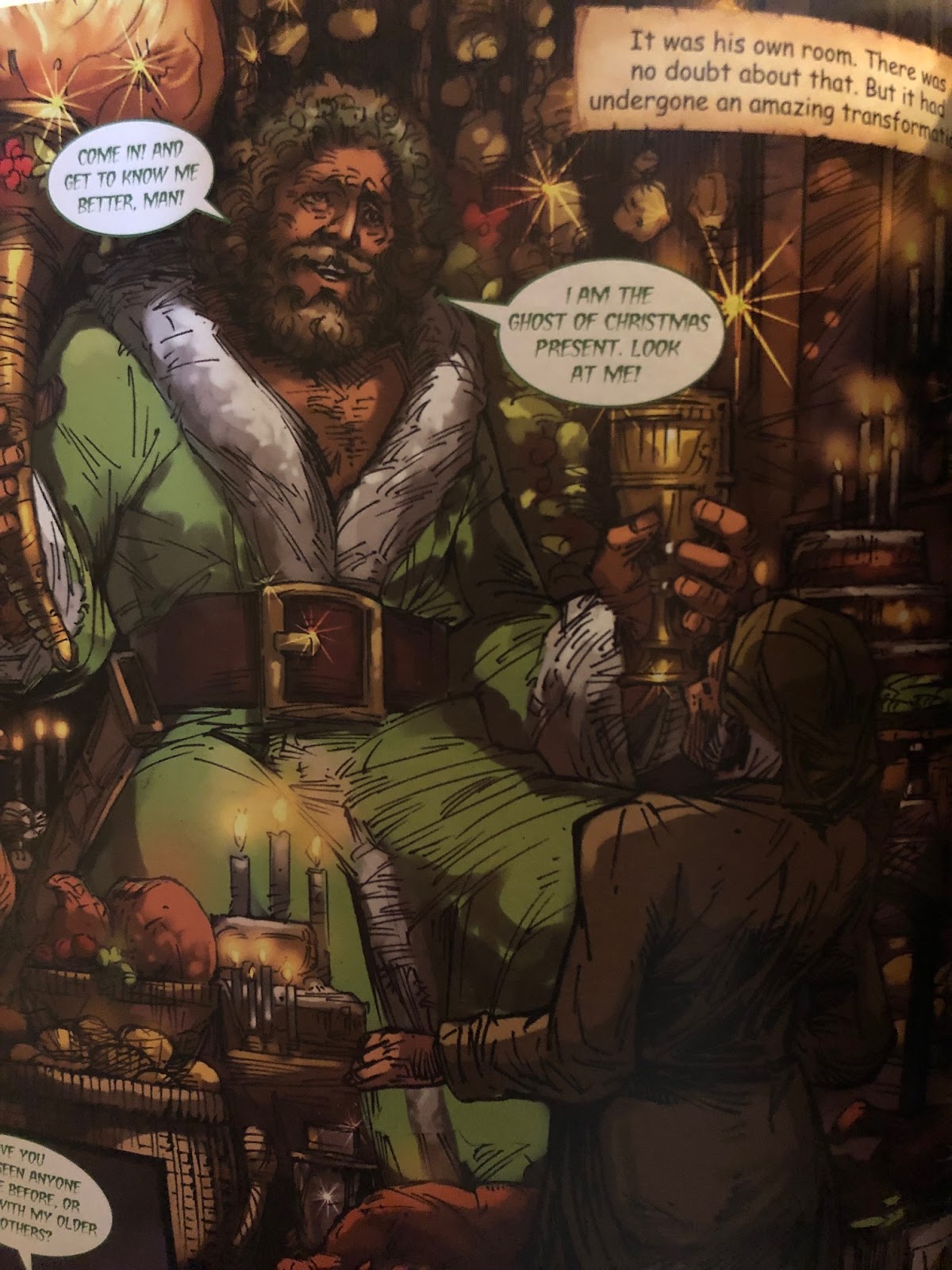 Like the Classics Illustrated and Marvel adaptations, Scott McCullar and Naresh Kumar's version gives this scene two pages. The first has Scrooge wake up and pull back his curtains, and the narrative text specifically calls out that he's doing it in order not to be surprised by the next ghost. By the end of the page, Scrooge has seen the light under his door and opened the door to be flooded with brightness.
The second page isn't a splash, but still gives most of its space to dramatically introducing the Ghost. This is my favorite depiction of the feast so far. Food and candles are everywhere and I love the muted, brown and golden color palette. It's very lush and decadent. And the food's extending behind the Ghost gives the impression that he could be sitting on a throne of it.
The Ghost himself is giant-sized, though not supernaturally so (which isn't a requirement). He's got the one-handed cornucopia torch that I like and his robes and fur-trim are the right colors. He's also got the broad, bare chest and long, brown hair. We don't see his feet for a good, long time, but peeking forward in the book, they are bare. He's got the swordless scabbard, too, which is a little more detailed than the Classical Comics version, but still not explicitly rusted. It does have an ancient quality to it though (or maybe I'm reading that into it). Like the Classical Comics version, this Ghost has everything except the icicles in the holly crown.
Kumar's inconsistent depictions of Scrooge early in the adaptation led me to the theory that this version is a malevolent sociopath who may be hallucinating all these ghosts in an effort to climb out of his own insanity. That continues in this scene. When the Ghost asks if Scrooge has ever walked with any of the Ghost's older brothers, Scrooge smiles kindly(?!) as he replies, "Never." There's nothing humble or apologetic about it, but there's also no sense that he's resentful or smug. There's no sense that he's interacting with a real being at all. Or at least that he believes he's interacting with a real being.
The dialogue modifies Scrooge's speech so that he doesn't say anything about having learned a lesson the night before. Instead, he tells the Spirit, "If you have anything to teach me, let's get this lesson done, so I may benefit from it." It's a perfectly inconsistent statement for this confused Scrooge. "Let's get this over with," but also, "I'm willing to change."
The Ghost does invite Scrooge to touch his robe and there's even a small panel focused on Scrooge's doing just that. As irregular as this Scrooge is, he's at least taking steps to get better.
at December 09, 2021

Good scene, seems comfortably cozy and festive. Hopefully this Scrooge does pull it all together by the end. ;)