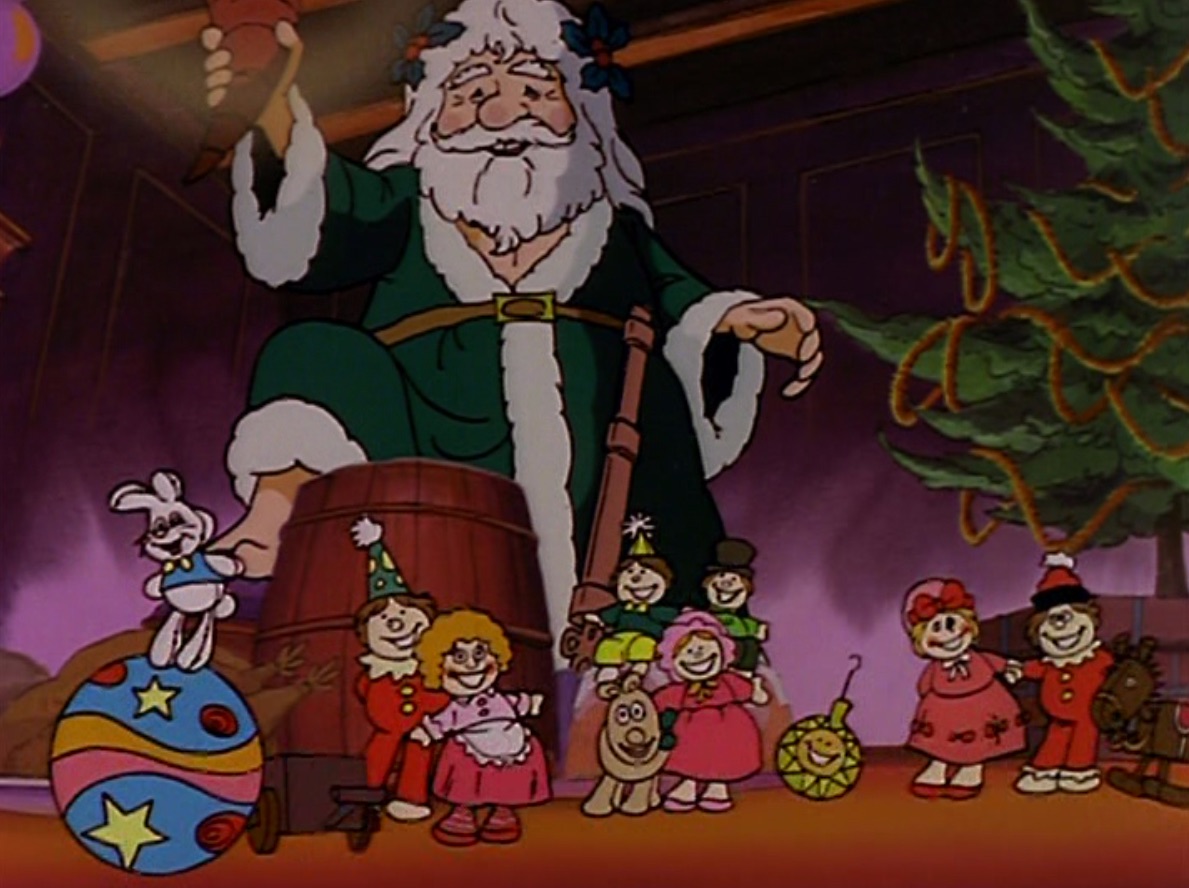 Rankin-Bass' version of The Stingiest Man in Town ended the previous scene with Scrooge falling asleep in bed as usual. But instead of immediately having him wake up again, the story cuts outside to Scrooge's window where our old friend BAH Humbug is peering in and wondering how Scrooge got back. He stayed behind when Scrooge left with the Ghost of Christmas Past, so he's not as caught up on events as we viewers are.
Just as Humbug is trying to figure this out, the big, nearby church clock strikes One and worries the little bug. Inside, though, Scrooge is still fast asleep and not thinking at all about the impending arrival of the next ghost. In fact, he's awakened by the Spirit's boisterous, jolly laughter coming from the next room. Scrooge wonders what the sound is, but Humbug knows. "Looks like the Number Two Ghost is right on time!" I think that's a random train schedule joke and if it is, I like it.
Scrooge still isn't getting out of bed, so the door to his room opens on its own and a bright, yellow light pours in just as the TV special cuts to commercial. When we come back, Humbug is now inside and looking toward the open door and the bright light alongside Scrooge.
Scrooge finally gets out of bed and goes to check things out, where we see his redecorated parlor. It's not covered in food, but there's a festive tree next to a table that has a candelabra, a couple of empty wine glasses, and a couple of dishes heaped with meat and fruit. The camera pans across the room to reveal the Ghost standing over a cake, a big cooked bird of some kind, and scattered grapes and potatoes. There's a barrel, presumably filled with wine, and the Ghost has a big, bare foot propped on something round that could be another food container or maybe just a piece of furniture.
The Ghost is so big that we don't see his face at first, but he's barefoot, has the empty scabbard (not particularly rusted), and his robe is the right colors. He introduces himself as the camera pans up to reveal his broad, bare chest, his standard cornucopia torch, and his holly crown. There are no icicles on the crown, but the biggest alteration from Dickens' version is that this ghost has long, white hair and beard instead of brown. Like with the Marvel Comics version, I assume this is to suggest Santa Claus to North American kids in the audience. As he invites Scrooge to come and know him better, the camera pulls back to reveal his full form.
Since this is a musical version, we get a song here to explain what this Ghost is about. It's not sung by the Ghost himself though, but by toys and ornaments on the Christmas tree that come to life and dance around. It's a fun, earworm of a song with a chorus that goes:

I won't reprint the entire lyrics, but a typical verse goes:

"Tinkling laughs of girls and boys
Mingle with the jingle of tinkling toys.
Words of hope and happy times
Sung to the music that chimes."

The point of the song is in the line: "Can't you hear it?" They're asking Scrooge why he can't hear the joy and spirit of Christmastime. Another line goes, "Boys and Girls can sing it too. They sing this song. Why can't you?"
Scrooge is distraught at first and asks the Spirit to stop the singing toys, but instead the Spirit hits Scrooge with a fireball from his torch (which is also what he used to bring the toys to life). Scrooge shrinks to toy (and Humbug) size and the toys quickly come over and pull both Scrooge and Humbug into the dance. Scrooge resists at first, which leads to some slapstick, but Humbug listens to the sound and joins in quickly. And before long, Scrooge has become caught up too and is enjoying himself with Humbug and the rest.
This version leaves out Dickens' line about Scrooge's wanting to continue learning what the previous Ghost taught him, but we see the same basic effect. Scrooge was frightened and saddened by his glimpses at the past, but having been torn down from that experience, he's already being built back up here before this Spirit shows him a single thing.
At the height of these shenanigans, the Spirit scoops up Scrooge and the Humbug and tosses them out the window where they fly over the city. Scrooge returns to his normal size and is concerned that he's going to fall, but the Spirit (who has followed them out the window) commands Scrooge to "touch the hem of my coat and be lifted."
The "hem" reference is interesting, because it's not from Dickens. It's from a couple of instances in the Gospel of Matthew that refer to people being healed by touching the hem of Jesus' garment. I noticed in the Marley scene that this version is more overtly Christian in its language than other versions, so I imagine that it's making an intentional connection between the Spirit of Christmas Present and the spirit of Christ's teaching. Properly manifested, both have the power to heal.
at December 13, 2021

Not a version I have seen, but it sounds quite interesting, and the picture looks comically fun. Have a hard time seeing terrifying versions of Ignorance and Want under this Ghosts robe, however.