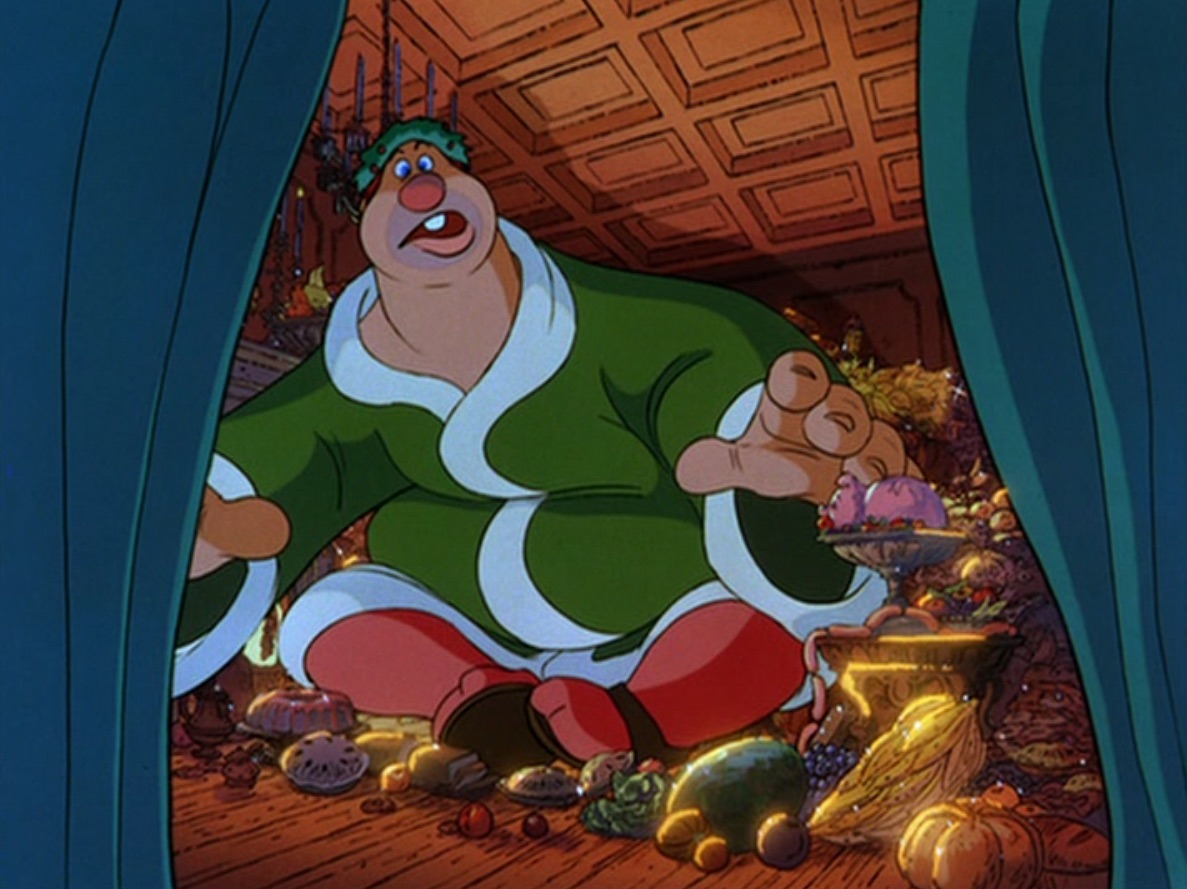 Mickey's Christmas Carol opens this scene with Scrooge in bed, still distraught over reliving his break-up with Isabelle. I suspect that's as close as we'll get to his acknowledgment to the Ghost of Christmas Present that he's still learning from the previous Spirit, but it's enough for now.

This version is one of those that had Marley announce that all three Spirits would visit in one evening, so Scrooge's little bedside clock chimes Two and not One before the next Ghost arrives. Scrooge isn't nervously anticipating the new Ghost; he's still beating himself up about Isabelle when a light comes on through his bedcurtains and he hears, "Fee! Fi! Fo! Fum!"

He peeks through the curtains and sees as lavishly decorated a room as we've had so far. This version has Scrooge living in pretty much just one room, so Scrooge doesn't even have to get out of bed to see what the Ghost has done.

Since we're dealing with a giant ghost, Disney has cast Willie the Giant from the "Mickey and the Beanstalk" segment of Fun and Fancy Free (1947). Willie's kind of a dumb character, which is funny, but that does mean we're not going to get the joyful, ultra compassionate character I love so much from other versions. But because Willie was created as an antagonist for "Mickey and the Beanstalk," he's going to be a bit threatening to Scrooge and that may not be entirely inappropriate as we go through these next scenes.

Physically, Willie doesn't have either a beard or long hair, but he's dressed correctly in the green robe with white trim and the holly crown (still no icicles, though). His chest isn't particularly exposed, but then maybe that's best when this version isn't defined by his heart the way that others are. He's not wearing a shirt under the robe though, so that's something.

He also doesn't have bare feet (and won't really need them since we won't get Ignorance and Want in this version). Instead, he's wearing medieval hose like he did in "Beanstalk." He has no sheath or scabbard of any kind and doesn't even have the iconic cornucopia-shaped torch. He'll find another light source when they get outside, which will be funny, but I still miss that torch. Like I said, though, the room is packed with food and the Spirit is sitting on a literal throne that's covered in and surrounded by it.

Scrooge is initially terrified of the Ghost, but after Willie declares that Scrooge is too distasteful and miserly to be appetizing to even a man-eating giant, Scrooge becomes more like his old self. Willie refers to the much more appealing food around them and Scrooge is greedily interested (unlike his earlier reaction to Donald's description of Christmas dinner).

In lieu of Willie's actually being an exemplar of love and generosity himself, Disney has Scrooge ask where all the food came from, which prompts Willie to explain that it's "from the heart" and to give a speech about the generosity that Scrooge has "long denied your fellow man." That's what I mean about Willie's antagonistic background being a benefit. When he confronts Scrooge about his failings, it carries weight that little Jiminy Cricket - as fussy as he can be - could never bring.

Scrooge is still resistant though. He asks when anyone has ever been generous to him, clearly forgetting about the vision of Fezziwig he just experienced. But then again, the Fezziwig scene was really all about Isabelle for Scrooge.

Willie's first response to Scrooge's accusation is that "you've never given them reason" to be generous. That always makes me a little nervous, because I always forget what he says next. I don't like the implication that generosity is something that should be earned. Clearly people have been generous to Scrooge. Just look at Donald's consistent, annual invitation to Christmas dinner. That's a much stronger argument and happily it's where Willie is going next.

He tells Scrooge that there are people who care about him, but Scrooge is incredulous. By this time, Willie has already stuffed Scrooge in his giant pocket, so he lifts the roof off of Scrooge's house so that they can both leave and see what Willie's talking about.

This Scrooge is a tough nut to crack, so it works symbolically that the Spirit doesn't even ask him to take the minor action of touching the Spirit's robe. Instead, Scrooge is forcibly brought along with no choice in the matter.

A different Ghost, for sure, but good enough in the Disney way. I haven't watched this version this year, but I want to try and catch before the holiday slips by. Short but sweet.