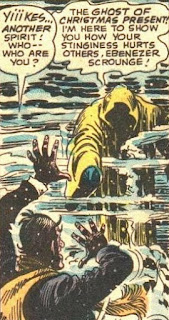 The Teen Titans Christmas Carol is a unique bit of fun in our study, because it isn't an actual adaptation, but simply an adventure inspired by Dickens' story. The Titans have noticed similarities between Dickens' characters and the people involved with their current case, so they're using Christmas Carol tactics to try to redeem a crooked, old sinner named Ebenezer Scrounge.
Kid Flash impersonated the Ghost of Christmas Past and showed Scrounge a photo of his younger self with an old flame. It was a sad, half-hearted attempt to show Scrounge a better version of himself, but we don't really know that Scrounge was all that much better off in the past and there's no reason to think that the tactic will actually work to change Scrounge. Except that of course it will because Bob Haney wrote this and he wasn't exactly known for nuance or subtlety. It'll work because A Christmas Carol worked.
One thing that definitely worked though was that Scrounge thought he was seeing an actual ghost and he was terrified of it. So in this year's scene, he runs out of his junkyard office and tries to make it home through the snow. He's stopped though by Robin (his green glove gives him away to the readers, if not to Scrounge) in yet another half-assed Christmas Ghost cloak like the one Kid Flash used, just a different color.
He claims that he's here to show Scrounge how his stinginess hurts other people. Scrounge is still scared to death of these ghosts, but hasn't shown any desire to repent yet.
at December 11, 2021

In a world where super heroes, aliens and supernatural occurrences do occur, I guess it makes sense to be petrified of what he perceives as spirits from beyond.