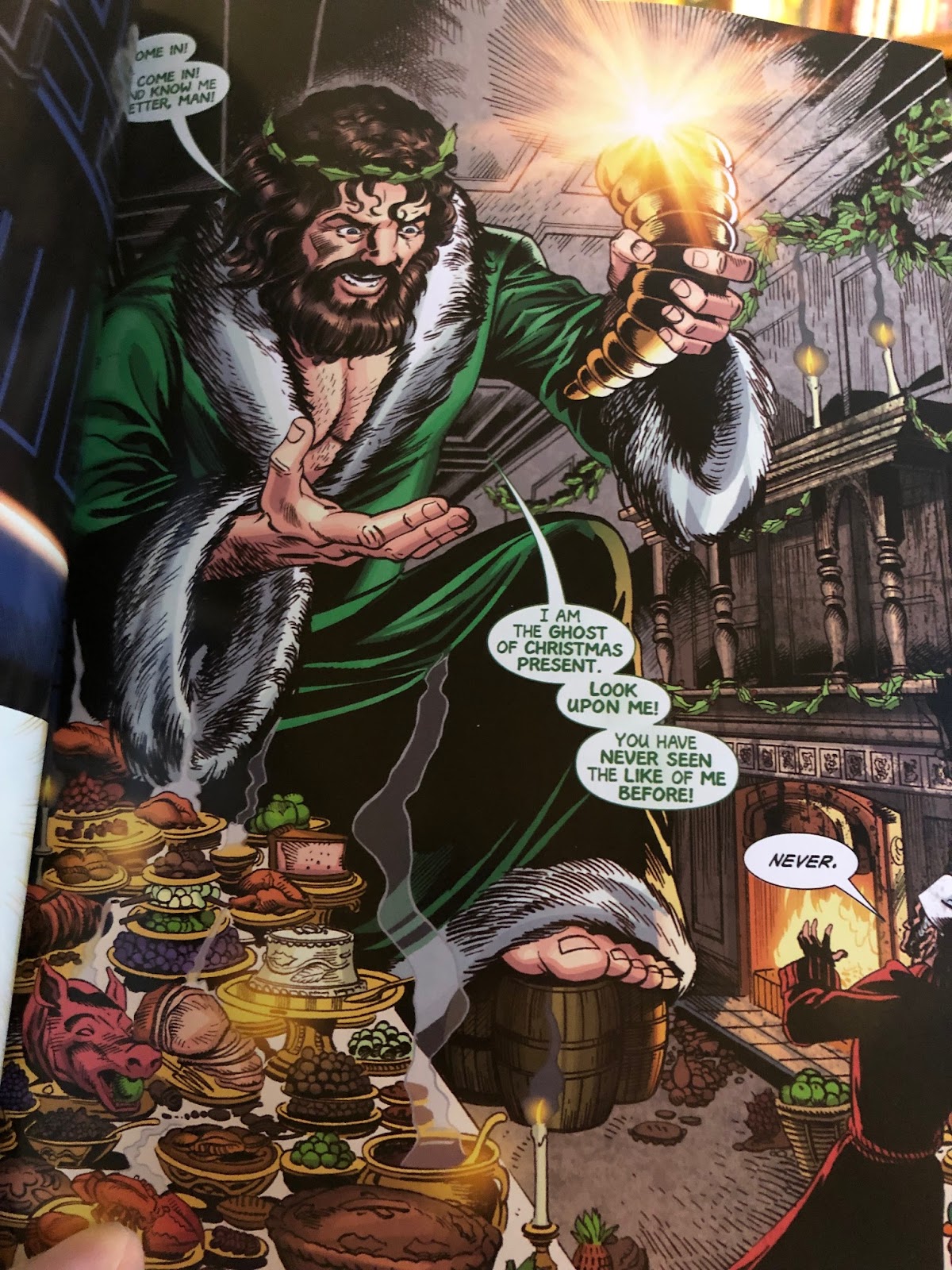 Classical Comics' version by Sean Michael Wilson and Mike Collins is a long graphic novel with plenty of pages to devote to each scene. Where the earlier two comics give it at most a couple, here it gets four.
The first page deals with Scrooge's waking up at the stroke of 1:00 am and pulling back his curtains in anticipation of the next ghost. The second builds tension as Scrooge waits, then sees the light under the door to the next room, then goes to open the door where he's flooded with light.
The third page is a splash with the introduction of the Ghost of Christmas Present. The banquet is confined to a table, so it doesn't cover every square foot of space, but the table is huge and the lay out of food is lavish. We can't really see what the Ghost is sitting on, but he's got one, giant foot resting on a bunch of kegs. There's also festive garland everywhere. It's an impressive page.
The Ghost is absolutely giant and has the cornucopia torch, looking more in this version the way I usually imagine it than the two-handed affair of Marvel's Ghost. He's got the green robe with the white fur, the big bare chest and shoeless feet, and his hair is long and brown. And though we won't get a good look until the Ghost and Scrooge hit the streets, the Ghost is also wearing the scabbard without a sword (though there's not enough detail to show that it's rusted). The only thing missing from Dickens' description are the icicles on the holly crown, so this is the most accurate representation of the Ghost so far.
The fourth page has the bulk of Scrooge and the Ghost's conversation before leaving the house. This comic has shown some willingness to change in Scrooge that started during Marley's visit and continued into Christmas Past's, so it's fitting that Scrooge recites the line from Dickens about learning a lesson the previous night that's still working on him at present. And the Ghost's inviting Scrooge to touch his robe is a perfect way to end the page before moving to the street for next year's scene.
at December 08, 2021

This is the idea I have of this Ghost, too. Bigger than life, over abundant in all ways. But hard to translate to live action movies without coming off too fantastical.