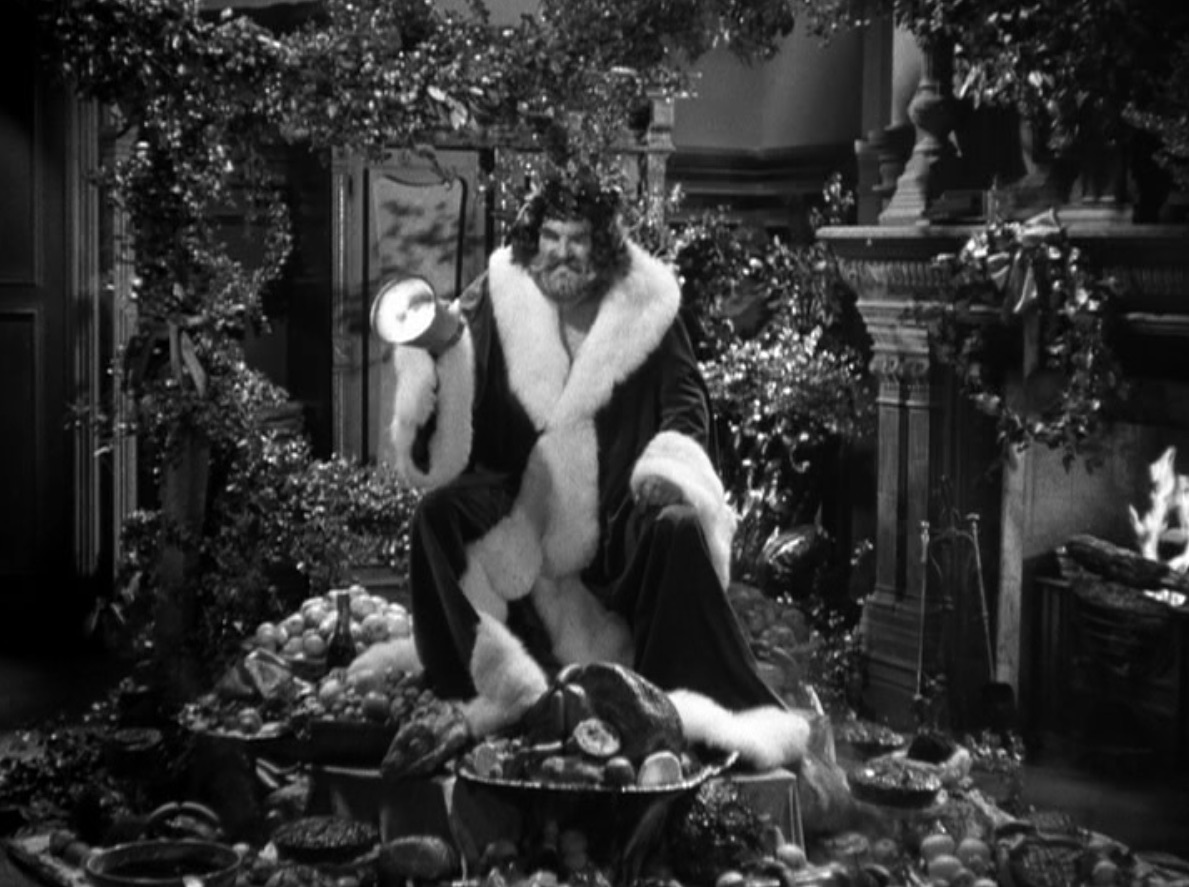 The 1938 Christmas Carol had Scrooge fall exhaustedly to sleep at the end of the last scene after trying to smother the Ghost of Christmas Past and having her turn into this own bedsheets. This scene opens on the clock, which is just about to strike Two. This film's Marley predicted that the ghosts would do everything in one night between the hours of One and Three, so we're on schedule.
Scrooge is fast asleep, but wakes himself up with his own snoring. He remembers what's been happening and checks his watch. Seeing what time it is, he looks around nervously a bit, but the chime of the clock comes quickly and there's not much suspense about the next spirit.
Almost as soon as the clock chimes, light begins pouring in around Scrooge's bed curtains, so he peeks through and sees our new Ghost. In this version, Scrooge's apartment is only the one room except for a little closet. The room is done up right though with a lovely fire, a wreath on the hearth, greenery all around, and the Ghost sitting on a chair surrounded by food.
He looks great right away. I love his curly long hair and his bushy beard. His robe appears to be the right colors (as much as it can in black-and-white). He's waving around a horn-shaped torch, too. There's no visible flame from it, but it's giving off a strong light and a bit of smoke, so it works even though I prefer a strong, visible flame. His robe is open enough to see some of his bare chest and of course he has the holly crown (though without icicles).
He's not wearing a sheath and he's not giant-sized either even if he is quite tall. His robe is long enough to cover his feet in this scene, but later when he and Scrooge are walking around we can see that he's not barefoot. Even with those discrepancies though I like him a lot. He has a great, regal voice and he talks to Scrooge in a friendly way, but as if Scrooge is a child who has to have everything explained to him very simply. He's got a twinkly eyed Santa quality to him that's utterly charming.
In spite of Scrooge's rebellious regression at the end of Past's visit, he's back to being contrite and interested with Christmas Present. He doesn't say the line about having learned a lesson, but he's eager to see whatever this Ghost wants to show him. When the Ghost stands up, Scrooge asks with genial curiosity, "What are we going to do?"
"Walk into the world this Christmas night," the Ghost explains. "So that you can hear and see and feel Christmas."
Scrooge's response if funny. "Did you say walk or fly?"
The Ghost is amused and offers his robe for Scrooge to touch. And without knowing whether he's actually going to walk or is in for another scary flight, Scrooge does it. The room goes dark and there's some fog and then we're outside.
at December 18, 2021

I think you nailed what I feel about this ghost, that he has that Santa Claus or Kris Kringle quality, which kind of fits as the spirit of the current Christmas. Guess that vibe is what I look for when seeing him. Jovial happiness and goodwill.

Same! I don't want him to look too much like Santa (which some of the comics versions seem to be going for), but I definitely want that vibe.