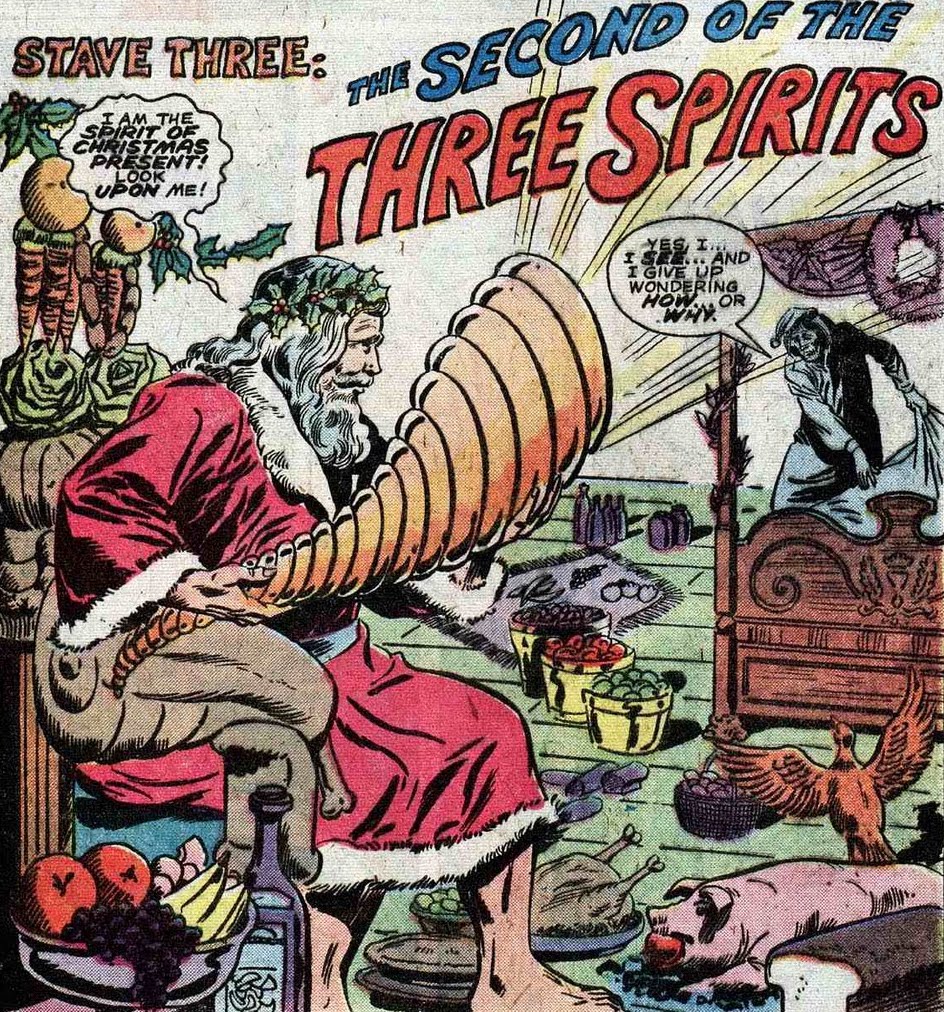 Like the Classics Illustrated version, Marvel's adaptation also wastes no panels on having Scrooge nervously anticipate his next visitor. As soon as the clock tolls one, Scrooge is awake and the Ghost is beckoning him into the next room.

It's not as lavishly decked out as the Classics Illustrated story. There's plenty of food scattered around, but the floor isn't exactly covered in it. It certainly doesn't mound to form the Ghost's seat, though I like that his throne is carved to represent food.

The Ghost is giant-sized. Just how much doesn't become clear until they hit the street later, but he's huge. He also has the cornucopia torch, represented as an enormous horn of plenty that the Ghost has to hold two-handed, with light pouring from it's large opening. That's not how I imagined it, but I'm probably influenced by movie adaptations (particularly the George C Scott one). This is a valid way to represent it and I like it.

Instead of a green robe with white fur, Marvel's Ghost has a red robe with white fur, probably to suggest Santa Claus. That likely also explains why the Ghost's long hair and beard are snowy white when Dickens specified that they were dark brown. The drawings are vague enough that it's hard to tell if he's bare-chested or wearing a shirt under his robe, but he is barefoot. The holly crown has no icicles and the sheath without a sword is also missing.

This version includes the line about Scrooge's learning a lesson the night before, which is nice to see because I've been worried about this Scrooge. He began the story almost maniacal, but seemed to settle down under the influence of Christmas Past. He's making progress and I hope he doesn't relapse.

The Ghost invites Scrooge to touch his robe, which Scrooge does, and the room immediately disappears.

Without the over abundance, this just looks like a messy room. Chaotic! Or I am too much of a neat freak.