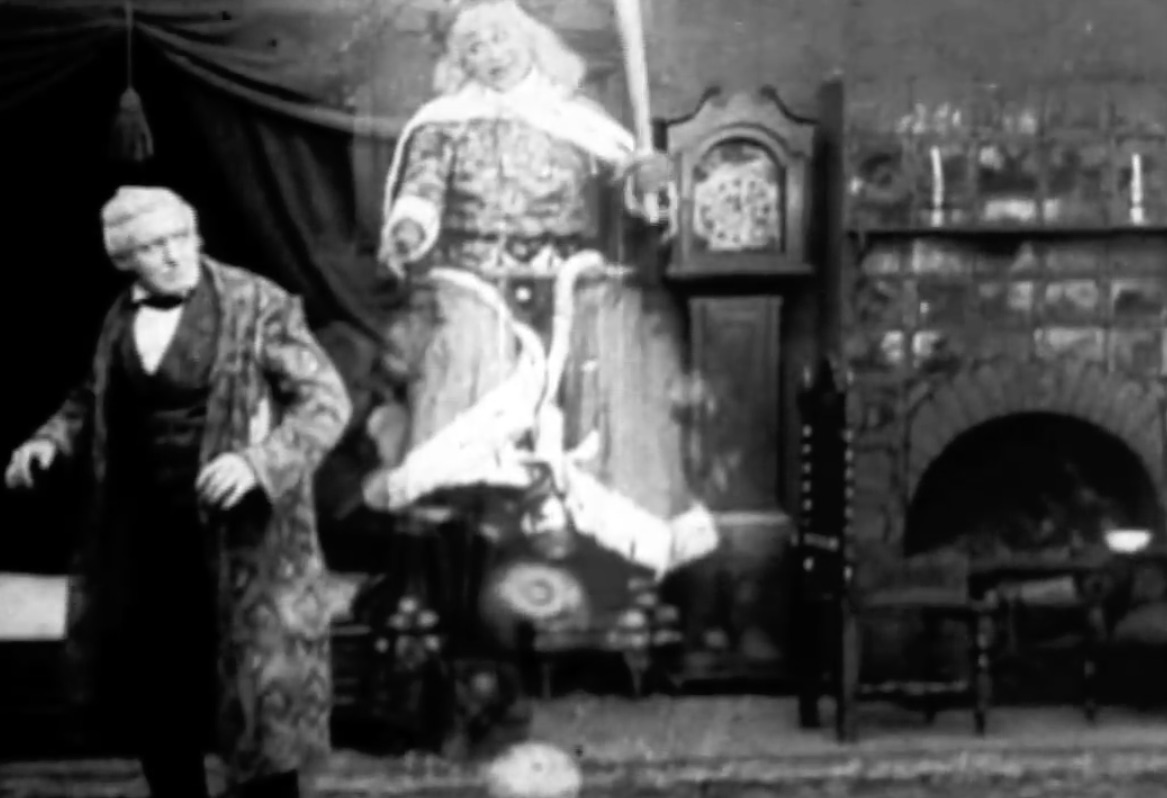 Thomas Edison's short, silent film has the same Spirit of Christmas showing Scrooge scenes from his past, present, and future, so there's no new ghost to meet this year. We do get a little interlude between visions though, first with a title card that tells us we're transitioning to "Visions of the Present" and specifically, "what the miser's wealth could do." But we also see Scrooge alone for a few seconds and apparently happy to be that way. He looks around the room and sees no ghost and I think I detect a smile. He pumps his fist as if in triumph and starts to get undressed and ready for bed. But before he even gets his robe off, the Spirit is back.
The Spirit brings no decorations or food and since he's the same ghost for all three time periods, he contains elements of at least the first two. He has the long white hair and clean shaven face of the first Spirit, but the holly crown and big torch (not horn-shaped) of the second. He's not giant, but his seat is elevated like he's sitting on a piece of furniture, so he does loom over Scrooge that way.
It's a black-and-white production so there's no way to tell what color his robes are, but they're just vaguely regal and medieval and not like what Dickens described at all. He's wearing a fancy tunic and we don't get a good look at his feet (at least, not in my fuzzy print). I can't pick out a sword either, but it could be under the Spirit's royal cape.
Scrooge looks disappointed and impatient that this isn't over yet, so that's consistent with how he's been all along. He's shown emotion at the scenes from the past, but there's no hint yet that he's learning anything from them. He doesn't say anything to the Spirit, nor does the Spirit invite Scrooge to touch his robe. The Spirit is just going to show Scrooge some scenes in his room, whether Scrooge likes it or not.
at December 16, 2021

I know it is old and made due with the limitations, but too much is lost.