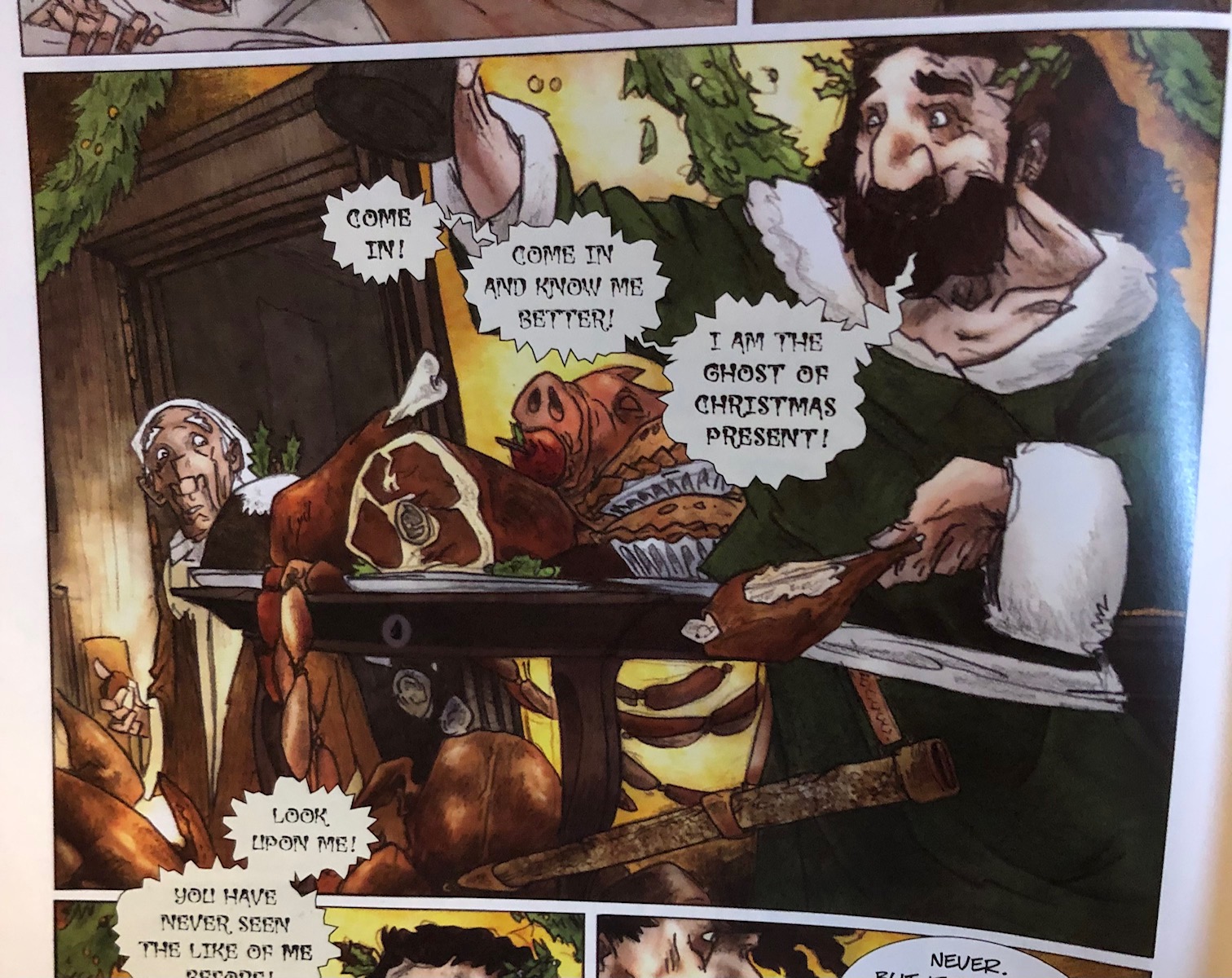 Alex Burrows and Micah Farritor's version give a page and a couple of spill-over panels to this scene. At the end of the last Christmas Past page, Scrooge goes to bed and the final panel of the page has the clock striking One.
On our main page, Scrooge doesn't sit up in anticipation of the next Ghost, but is awakened by banging and crashing sounds coming from his sitting room. There's no light under the door, but he goes to check out the noise and that's when he meets the spirit. Whom I presume made the racket while setting up the Christmas feast?
The largest panel on this page introduces the Ghost who's sitting at a table filled with holiday food that's also spilling onto the floor. It doesn't appear to cover every inch of the room, but it's bountiful. There's also festive garland on the walls.
The Ghost himself is very large and carries what I'm now considering the standard, one-handed cornucopia-shaped torch. He has the green robe with the white fur trim. And while his chest isn't bared, his robe falls loosely enough on him that we can see he's shirtless underneath it. The robe is also long enough to cover most of his feet and we don't get a good look in this scene, but a peek ahead in the book shows me that he's barefoot.
He has the long, brown hair and the holly wreath, but still no icicles in this version either. He does have the swordless sheath though and kudos to the colorist (Farritor, I presume, but I don't know for sure) for giving the sheath a rusted texture. That makes this the most faithful version yet and I especially like Farritor's design of the Ghost's face with its high cheekbones and large, strong nose. He's quite distinctive.
Scrooge doesn't mention anything about the effect of the previous night's experience on him, but we've seen him strongly affected by it in those scenes. Spelling it out is unnecessary in this version, so all Scrooge needs to say is that if this Ghost has something to teach Scrooge, he's ready to profit from it.
That ends the main page of this scene, leaving the Ghost to invite Scrooge to touch his robe (and Scrooge's actually doing it) in the first panel of the next page that will also have them actually hitting the streets.
at December 10, 2021

This one looks both festive and fun, and this Ghost of Christmas Present has a Muppet-like appearance to me, for some reason. Like a comical face, in a way.

Great comparison! I agree; I just wasn't able to put my finger on why I like it so much.