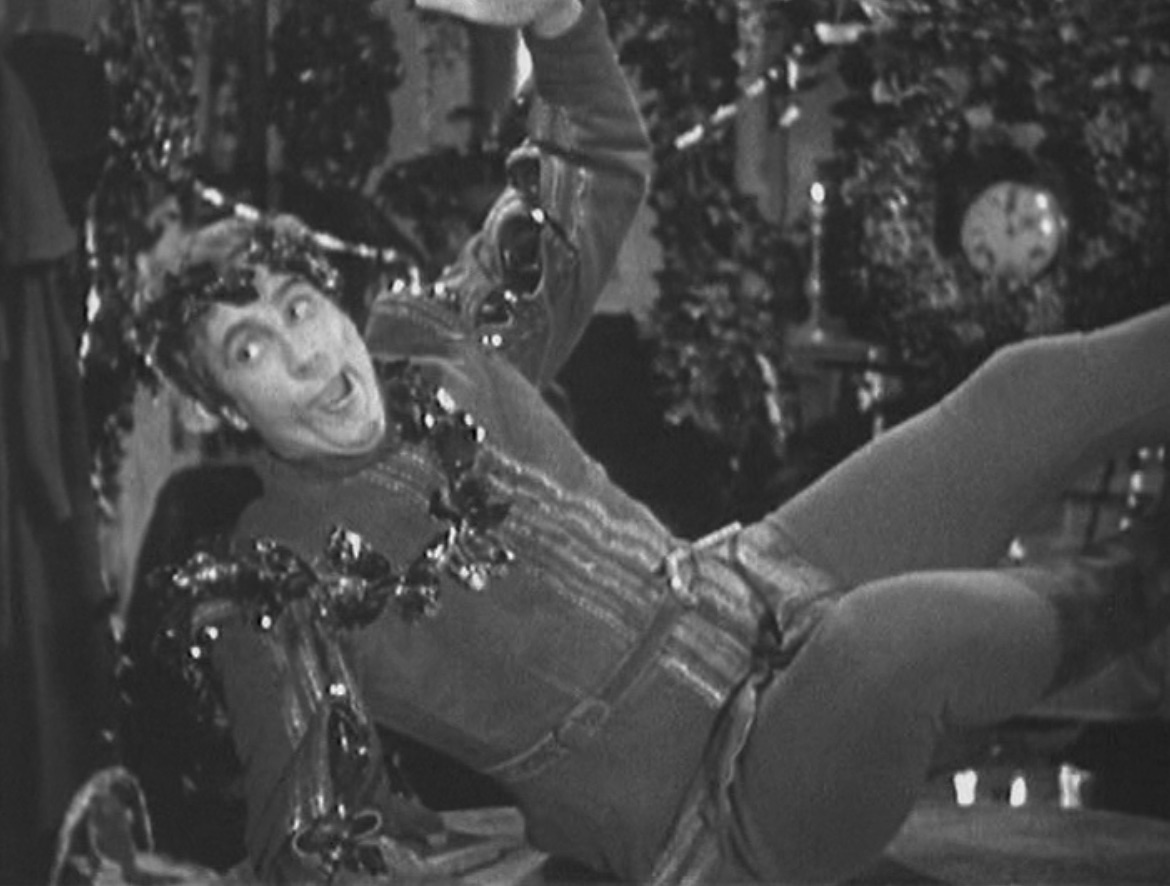 After Scrooge and Belle's breakup at Fezziwig's party, the Shower of Stars adaptation had Scrooge pull back into his room and close the shutters. The shot then cuts to outside Scrooge's house where we see the shutters still clattering as a town crier walks beneath them on the street, calling the two o'clock hour.
There's a dissolve and Scrooge is now sleeping in his bed, but he's awakened by music. I wasn't sure at first if he was actually hearing the music or if he just woke up on his own, but it turns out to be the overture for the next song in this musical version. As a deep baritone voice begins singing, Scrooge pulls open his bed curtains to see his room transformed by greenery and candles and popcorn strings and... his nephew Fred in a festive costume?
This version had the actor who plays Belle double as the Ghost of Christmas Past, so this is a thing that they're doing. After the song, Scrooge will even express confusion about who's in his room: his nephew or a ghost? I miss the more faithful versions, but I kind of appreciate that these spirits are taking on the looks of key people who represent Christmas in Scrooge's past and present. Belle because she broke up with him at a Christmas party and Fred because of his annual invitation to dinner.
Since the Ghost appears as Fred, he looks nothing like Dickens' description or any other version. He doesn't even have the fur-trimmed robe, which would be easy enough to have draped on him. Same with the cornucopia torch that he also doesn't have. Of course he doesn't have the long hair and beard, either, or a bare chest or bare feet. And he's Fred-sized, not giant. Instead of an empty scabbard, he has a candy cane stuck in his belt. Really the only accurate thing he has is a small holly crown to match the garland of holly he wears around his neck.
His song, sadly, is repetitive and terrible, made even worse by its being an ear-worm that makes its home in my head for days after hearing it.
A very
A merry
A very, merry Christmas
A very
A merry
A very, merry Christmas
Oh days may come and days may go
But this is the day of the mistletoe
With lights in the windows and holly on the walls
And children waking up with Christmas calls
A very a merry
A very a merry
A very a merry
Christmas Day
The Ghost tries to have some fun with it, playfully running through vocal scales with some of the words, but it only makes the song longer. And he sings it three times in a row.
During all of this, he's messing with Scrooge. The first time he mentions mistletoe, he produces some, takes off Scrooge's nightcap, and kisses the old miser on the forehead. That's kind of sweet actually and gets a big smile out of Scrooge.
The Ghost does magic tricks, too. He pulls a crazy long strand of holly out of Scrooge's robe (getting another smile for it) and drapes it from the ceiling. He makes the hands of the clock go back and forth and brings a stuffed raven to life (although the special effects for this all involve cutting away and suggesting the trick rather than showing it). And of course he finally forces Scrooge to dance with him.
I mentioned that Scrooge smiles a couple of times, but he doesn't really seem too sure about any of this. His general attitude is bewildered curiosity at first. He plays with the bells on the Ghost's costume and, as I said, he occasionally breaks into a big smile. It's similar to how he was at Fezziwig's party, getting into the spirit in his own awkward way. But by the end of the song, it's a bit overwhelming and he's back in bed covering his head with his sheets.
There's no invitation from the Ghost to come and know him better. Instead, he sits at Scrooge's table and simply waits for Scrooge to come out. When Scrooge does and asks whether the Ghost is Fred or not, that's when the Ghost reassures him that "only good will happen to you." I like that. March's Scrooge is especially fearful and the Ghost notices.
Scrooge, still trying to understand why someone who looks like Fred is sitting at his table and turning his nose up at Scrooge's gruel, repeats the Ghost's name. "Christmas Present?"
"Yes. You don't give many of them, do you?"
Scrooge looks ashamed. "Not of late years. No."
The Ghost laughs and nudges Scrooge. "I do! It's my business." He waves at the feast around them. "None of this will be wasted, you may be sure."
Scrooge looks absolutely, pathetically contrite. "Spirit, if you have anything to teach me, I am ready to learn." It's heartfelt and heartbreaking, really. March is excellent and I feel horrible that his Scrooge is going to have to endure so much more. He's ready to change. But the Ghosts will have to make sure.
It's curious that this Ghost didn't invite Scrooge to come and know him better and he also doesn't ask Scrooge to touch his robe. In most versions, those are encouragements for Scrooge to take action, but this Ghost does all the work and lets Scrooge off the hook. Is that because he already sees that Scrooge's heart has changed?
The Ghost goes into a variation of his song and turns Scrooge's gruel into a plum pudding. Or did he? The camera pulls back from the cake to reveal that it's not on Scrooge's table, but on Bob Cratchit's. An unseen chorus continues the song as the camera continues to pull back and present the next scene.
at December 20, 2021

Lots of changes. Glad that some try something new and different, but for me this might be too different.