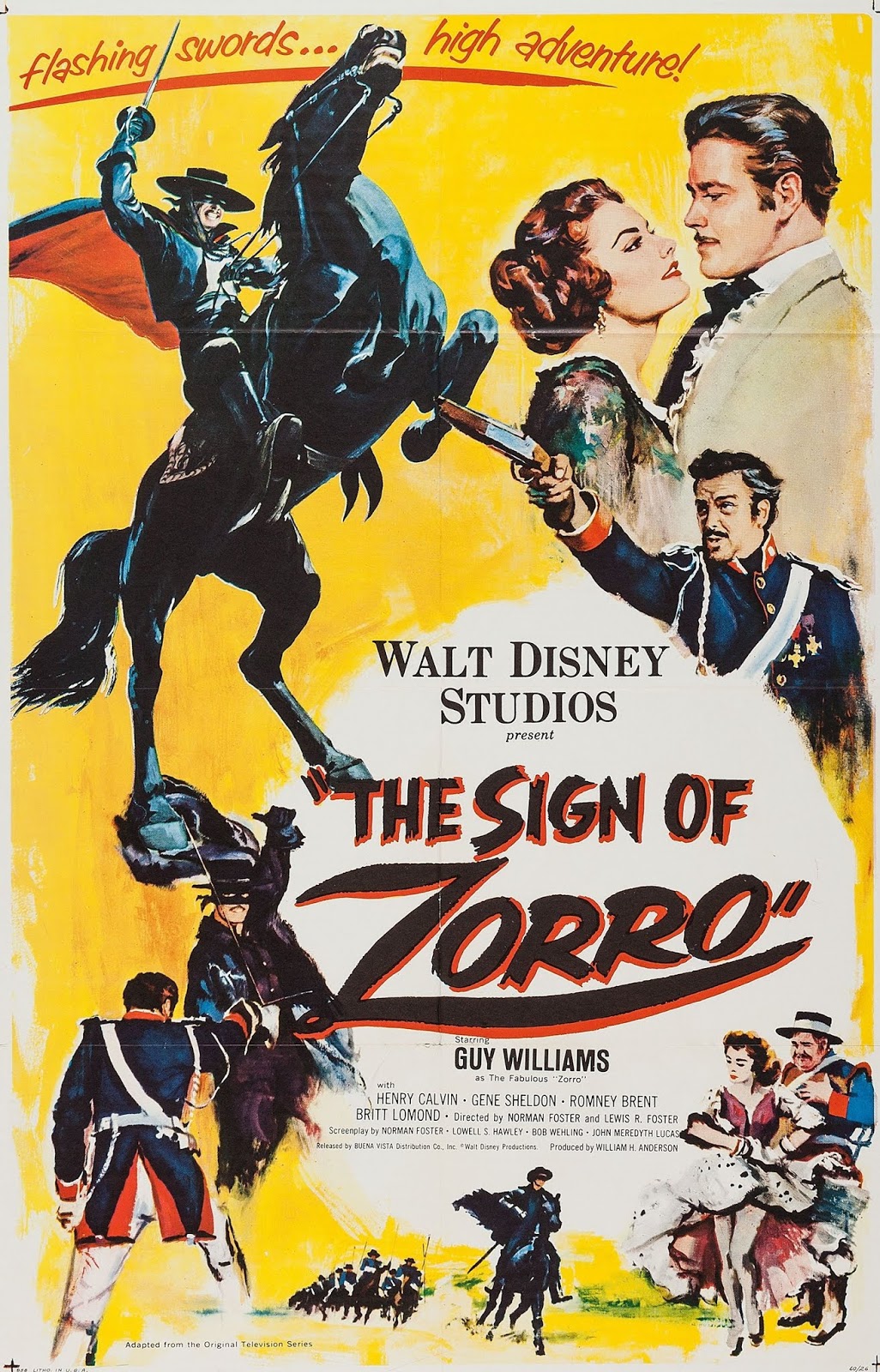 Who's in it?: Guy Williams (I Was a Teenage Werewolf, Captain Sindbad, Lost in Space).

What's it about?: Walt Disney adapts Zorro as a TV series.

How is it?: Williams is the definition of swashbuckling and perfectly plays the balance between dashing Zorro and passive Don Diego. Gene Sheldon is also delightful as Diego's mute manservant Bernardo and Henry Calvin is a joy as the good-hearted, but wrong-sided Sgt. Garcia

I expected most of that, having watched an episode or two as a kid, but what I'd totally forgotten was the amazing sets and matte paintings. Disney threw some real money at the show and created a wonderful fantasy landscape for southern California with all kinds of great cliffs and passes and skull-shaped mountains.

And I had no idea that the storytelling was so 21st Century. Each episode is more or less self-contained, but they also connect and build on each other to tell longer stories. In fact, the first eight episodes were packaged together to become a feature film release in 1960, The Sign of Zorro. And that's not even the entire saga of the ruthless Captain Monastario. The evil officer takes 13 episodes to bring down and I was actually shocked when Zorro eventually succeeded and the story line ended.

Then, just as Zorro's thinking of retiring, a new enemy shows up in the form of a secret society that uses eagle feathers to communicate. The group's leader, the mysterious Eagle, lurks in the background for a while, pulling strings behind a variety of other villains and plots as he works toward a takeover of the entire state of California. And while Zorro competently overcomes every individual threat, a growing sense develops that he's getting in over his head when it comes to the Eagle's larger organization. The stakes are raised nicely as the show heads toward the first season finale. And while Zorro manages to pull out some kind of victory each episode, the wins get smaller and smaller as the Eagle gains more and more power, even taking over Don Diego's home.

Sadly, the Season One finale isn't entirely satisfying. Zorro pulls out a decisive victory, but it's also apparent that it wouldn't have been as decisive if the Eagle hadn't grown impatient and tried to stage a final coup before he was ready. His allies knew it was a bad idea and withdrew, but he insisted on moving ahead alone, which was a bone-headed play and led to his downfall more than Zorro's skill did.

Still, the first season is a strong run of almost 40 episodes, even if it doesn't perfectly stick the landing. One of the MVPs of the series is Don Diamond as a late addition to the cast. He's brought in as a foil for Sgt Garcia; someone for Garcia to boss around, but who doesn't follow orders so well. The two of them are hilarious together and bring a needed, lighter touch to the show just as it's starting to look rather grim.

Season Two features a major change in location. Instead of taking place in Los Angeles, the action moves to Monterey where a patriotic trader is trying to gather money for a massive supply shipment. Spain is at war, so the Spanish citizens of California see it as their duty to support their homeland by keeping up business. The trouble is that shipments of investment capital from all over California are being intercepted by bandits, so Don Diego has traveled to Monterey to oversee delivery of the money from LA.

He's accompanied by Bernardo and is eventually joined by Sgt Garcia and Diamond's Cpl Reyes as well, so the best characters from the first season are still there. But the locations were such an important part of Season One and I wasn't ready to let them go. Happily, the relocation isn't permanent, but it takes a while to get Zorro home. Unlike the original novel and some other adaptations, the Californian government in the Disney show isn't depicted as completely corrupt. But the governor isn't as wise or careful as he should be either, so his underlings are often able to get away with cruel activities. When that starts to happen in Monterey, Zorro has to smother the oppression or occasionally deal with other rebels who are just as brutal as their oppressors. These are interesting conflicts, but they go on too long for me.

My interest was renewed though with the introduction of some cool guest stars. Richard Anderson (Oscar Goldman from The Six Million Dollar Man) became a recurring foil for Don Diego. The two characters are old rivals and things get complicated when both men fall for a woman named Señorita Verdugo. I'm not usually crazy about these kinds of romance triangles where two people both like the third and the object of their affection refuses to make a choice. But it works in this case, because I feel like Verdugo actually makes a choice, but one of the men isn't paying attention. Whatever the case, Anderson adds a lot of fun to the cast and the plot wraps up in a really lovely way.

After that, Season Two abruptly and unceremoniously returns the main cast to Los Angeles in time for a few episodes with Cesar Romero as Don Diego's shifty, gold-digging uncle. There are still multi-episode story lines from there, but they don't flow from one to another the way earlier episodes did and there are a few that are just completely standalone.

The series never returns to the 13-episode arcs of the first season, but one of the best multi-part story lines stars Annette Funicello, who was given the role as a 16th Birthday present by Walt Disney. She plays a young woman who's come to Los Angeles to meet her estranged father. She's convinced that he lives there and she's even received letters from him postmarked Los Angeles, but no one has heard of the man. It's a cool mystery and Funicello brings a lot of conviction and spunk to her role.

Season Two ended in 1959, but Disney kept Guy Williams on salary and made four more episodes (hour-long this time) to run on the anthology series Walt Disney Presents. The first two ran in Autumn 1960 and formed a single story about a group of Mexican bandits who show up in Los Angeles to challenge Zorro's supremacy as local outlaw.

The next episode ran in January 1961, featuring Annette Funicello, who was back as a different character: a family friend of Diego's who's trying to elope with the wrong fella. And saving the best for last, an April 1961 episode had Ricardo Montalban and Wild Wild West's wonderful Ross Martin as a pair of scoundrels who know enough about Diego's past to suspect that he's Zorro. It's a great finale and makes me wish that there'd been a whole series just about those two characters.

Rating: Four out of five rapiers 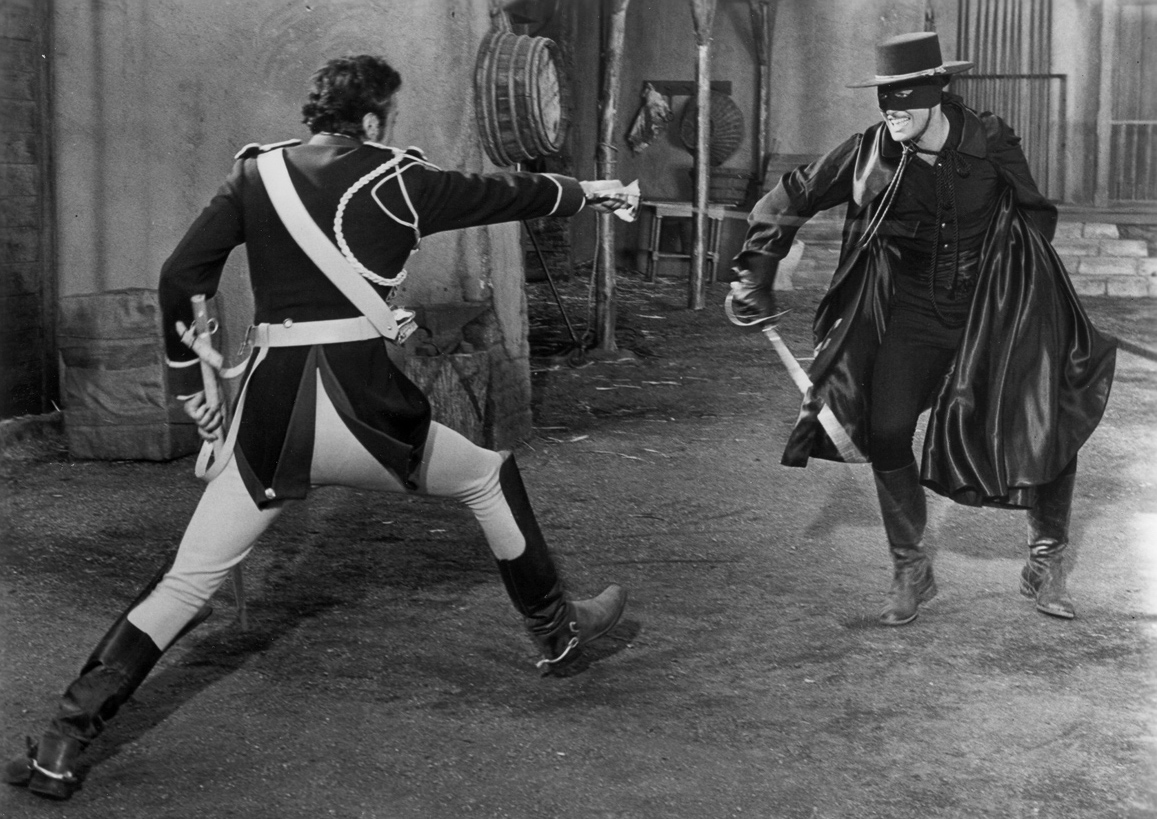