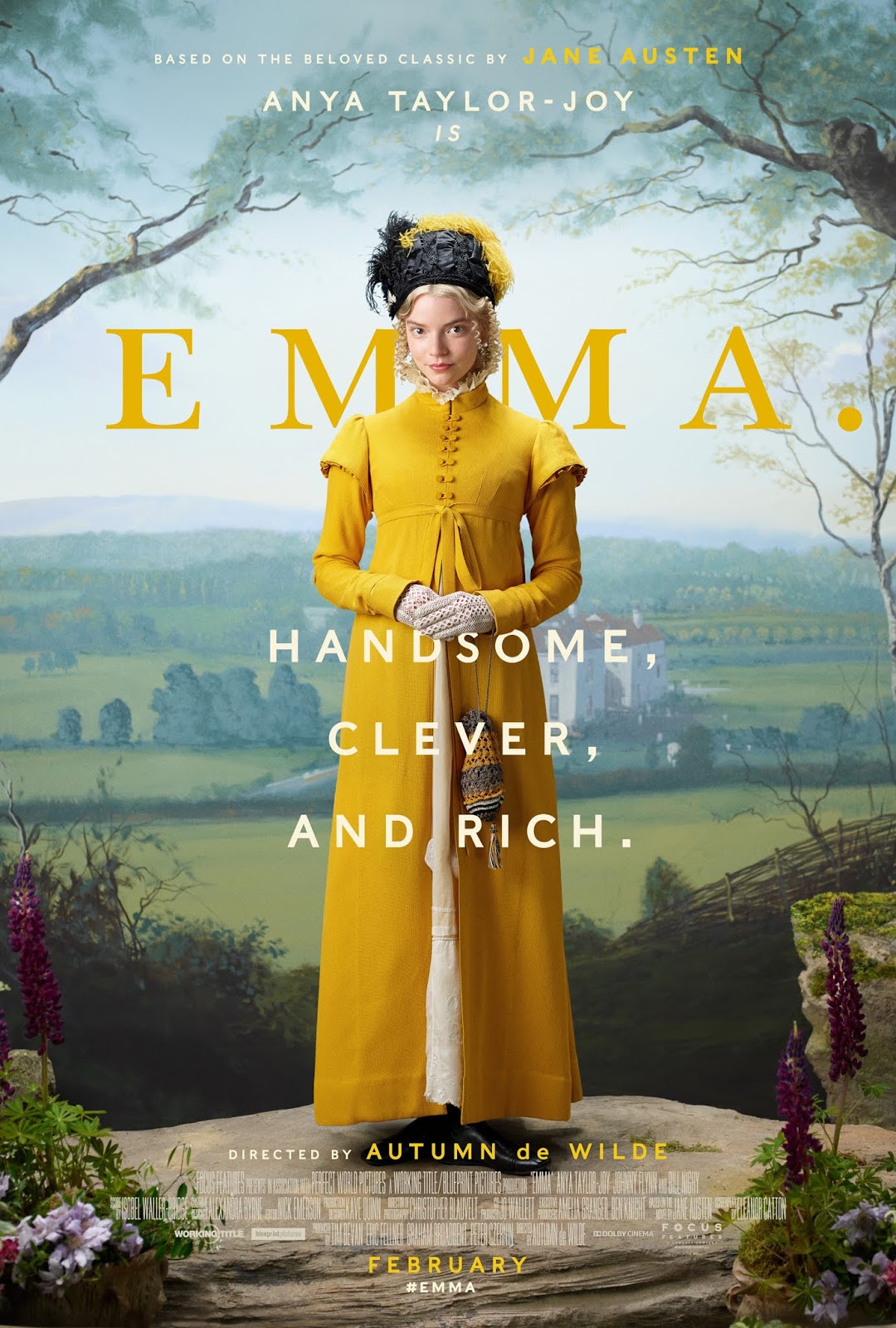 Who's in it?: Anya Taylor-Joy (The Witch, Split, Marrowbone), Mia Goth (A Cure for Wellness, Marrowbone, Suspiria), Bill Nighy (Underworld, Love Actually, Pirates of the Caribbean), Rupert Graves (A Room with a View, Where Angels Fear to Tread, Sherlock, The White Queen), and Miranda Hart (Spy)

What's it about?: An adaptation of Jane Austen's novel about a well-meaning rich girl in need of humility and learning to mind her own business.

I went in a little concerned that it would take too lighthearted an approach to the story, but while it's quite funny (Bill Nighy's hypochondria and his long-suffering servants being especially hilarious), it also values the emotional pieces and themes that make this my favorite Austen story. Of all of Austen's characters, Emma Woodhouse is the one I relate to most. She has good intentions, but thinks she knows best what's good for people and can be controlling about their welfare. She needs taking down a peg or two, but to do it requires someone who loves her enough to risk their relationship with her by challenging her to change. I might have gotten a bit misty there a couple of times.

It deserves to be seen on the big screen for Taylor-Joy's eyes alone, both in terms of sheer beauty and how she uses them in her acting. It's a lovely, captivating performance.

Mia Goth is also wonderful as the current object of Emma's efforts. Rupert Graves plays the beneficiary of one of her past schemes. And Miranda Hart is pricelessly buffoonish as an irritating neighbor who adores Emma, but rubs her the wrong way. 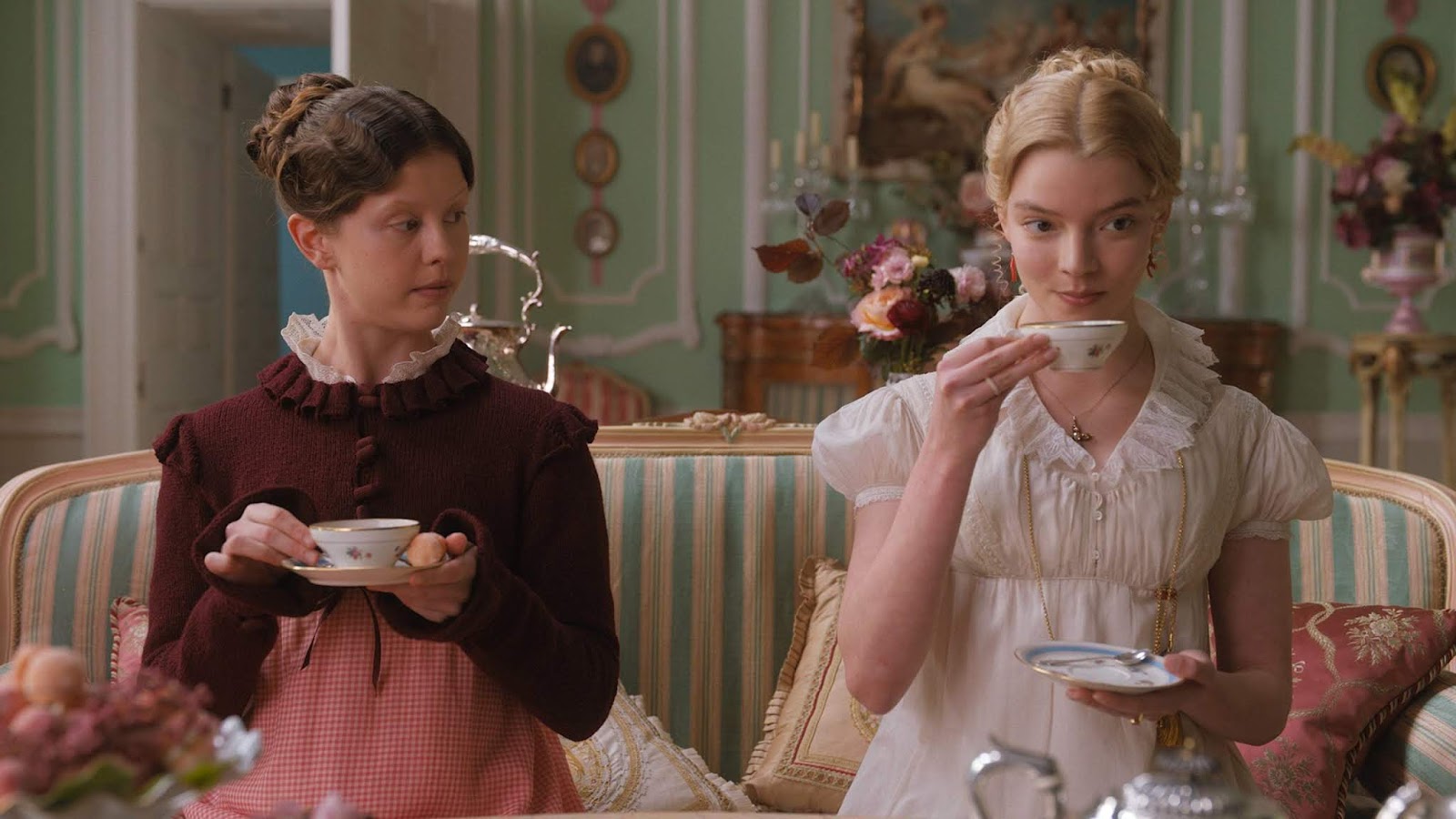 Delighted to see you enjoyed this one Mr May - saw it with my parents and they each loved it as much as I did (though one must confess that I laughed the hardest); EMMA was gorgeous and funny and not in the least stuffy, which is exactly how I like my Austen.

On a less relevant note, I would love to see Miss Anya Taylor-Joy play Mr Sheridan Le Fanu's CARMILLA (it's those amazing dark eyes of hers and those slightly eerie Good Looks); I wonder if Miss Mia Goth would make a suitable Miss Laura? (it would certainly be a fascinating distortion of their relationship in this film).

Yay! I'm glad you liked Emma, too. I'm thinking I'll want to see it again before it leaves theaters.

I've never read Carmilla, which I need to remedy. I'm always up for Taylor-Joy in anything, especially horror-related, so sign me up for your hypothetical adaptation!

Related: I've been reading a comic-book series called Adler, published by Titan Comics. Even though it's named after Irene Adler, it's basically League of Extraordinary Gentlemen with mostly female characters. Jane Eyre is Watson to Adler's Holmes, for instance. And the main villain is Haggard's She Who Must Be Obeyed with Carmilla as her primary henchperson. The art is gorgeous and the story is super fun. I bet you'd love it.

Mr May, I can definitely recommend CARMILLA - it's a novella and not a full novel, so it doesn't take very long to read through, the prose style is very readable (arguably easier to access for casual readers than DRACULA) and the relative brevity of the piece means Mr Le Fanu leaves far more room for ambiguity than Mr Stoker's more detailed version of events.

I'd love to see your thoughts on the story once you have read it!

Also, that series you mention does sound interesting; may I please ask if Mrs Rochester is her proper age or if she has been aged down to be a contemporary of Mrs Norton? (According to my understanding of things Jane Eyre would have been born circa 1817 - assuming she was about thirty in 1847, when her eponymous novel was published - while Irene Adler was apparently born in 1858, which makes her more than young enough to be Mrs Rochester's daughter!).

Given they're going on adventures, it seems likely the ages have been fudged a bit but I would still be interested in learning whether Eyre is depicted as older than Adler (as is only appropriate, given JANE EYRE was published almost half a century before A SCANDAL IN BOHEMIA).

Yeah, Jane has been considerably de-aged. She's about the same age as Irene in the comic. I love the series, but it's definitely best taken light and loose.

You know it just occurred to me that if one were looking for a more age-appropriate Late Victorian 'bestie' for Mrs Irene Norton (née Adler) one of the more interesting possibilities would be Mrs Mina Harker (née Murray); assuming she's somewhere between twenty-five and thirty in the early 1890s (i.e during the events of DRACULA) then she'd probably be young enough to be Mrs Norton's sister from another mister ...