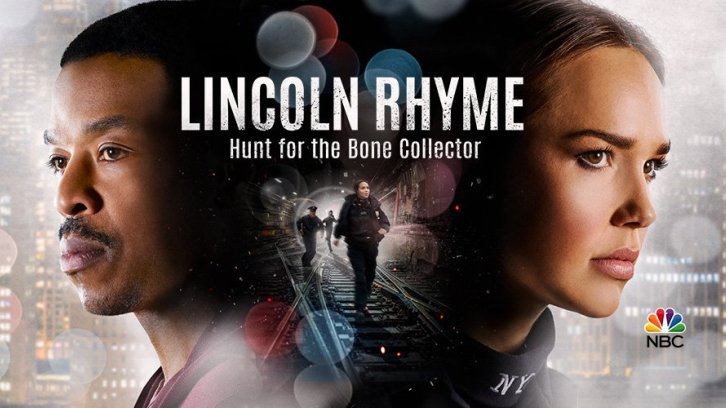 I have Goodreads to log my reading and Letterboxd to record my movie watching, but there's not a great site that I know to record thoughts on TV shows. I can and do keep track of what I watch on IMDb, but I'm not interested in jotting down actual reviews there. It's too big and covers too many other things. If there's a great site dedicated to logging and talking about just TV, someone please let me know. In the meantime, I'm thinking I'll use the ol' blog to record thoughts about TV shows that I'm trying out.

A few years back, we talked about the 1999 movie The Bone Collector on an episode of Mystery Movie Night. I'd forgotten all about it, but Erik Johnson recently reminded me that in that conversation he made the observation that the movie felt like the pilot to a TV series. And the reason he brought it up was because someone else clearly thought so, too.

I like the movie. I'm not sure the story holds up to close scrutiny - either the plot or some of the characters' motivations - but Denzel Washington and Angelina Jolie are both really watchable and it's fun to follow them as they solve the serial killer's puzzles. I also like the concept of a super smart, but housebound detective working with an also capable, but definitely more mobile partner to solve crimes. The Bone Collector novel by Jeffery Deaver was published in 1997, just about a year after DC Comics published Black Canary/Oracle: Birds of Prey by Chuck Dixon and Gary Frank featuring wheelchair-bound Barbara "Oracle" Gordon and Black Canary.

But we probably shouldn't give too much credit to Dixon and Frank, because the concept goes back at least as far as 1934 when Rex Stout's Fer-de-Lance was published. That's the first appearance of Nero Wolfe, an obese, possibly agoraphobic detective who never leaves home, but solves mysteries with the help of his assistant Archie Goodwin. I've always liked those stories too, especially as adapted in the '80s TV series starring William Conrad and Lee Horsley.

Deaver's Bone Collector novel has had over a dozen sequels, so there's plenty of material to adapt for further adventures of Lincoln Rhyme and Amelia Sachs (renamed Donaghy in the movie, for some reason). Again, I like the concept, so I decided to give the new series Lincoln Rhyme: Hunt for the Bone Collector a try when it premiered last month on NBC.

After all that background information, it's a shame to say that I didn't like the show. Arielle Kebbel is fine as Sachs, but Russell Hornsby's version of Rhyme lacks the instant charisma of Denzel Washington. I root for Washington even when he's being stubborn and cranky. If I were to stick with the show, I'd need more time to warm up to Hornsby.

But the biggest barrier for me is the subject matter. I enjoyed the pilot, because it adapted the plot of the novel differently from the movie and kept me guessing even while it reminded me of what I like about these characters. What I didn't like was that it kept the Bone Collector serial killer at large at the end, hence the series' subtitle. And I didn't like the Bone Collector's motivation for killing, which I won't spoil, but I thought was ridiculous and makes Rhyme even more unlikable.

But even with all that, I felt like I could deal if the series kind of followed the format of The Mentalist and was mostly a criminal of the week with the Bone Collector occasionally popping in for sweeps week and season finales. I wouldn't love it, but I thought maybe I could take it.

I tried watching the second episode though and the Bone Collector character is right there out in front, torturing and killing and planning how he's going to keep sticking it to Rhyme. And in the meantime there's a whole new serial killer with an especially harrowing MO and I gave up ten minutes in. I can handle some pretty dark stuff if I'm super invested in some other aspect of the story, but with this, it felt like the darkness is meant to be the draw.
at February 05, 2020

I was under the impression this was a limited series adapting the original book, similar to how Netflix or other streaming services have essentially told ten-hour movies in broken into pieces. A format like that would seem fitting for the weight of a catch-the-killer drama, but it sounds like this is a typical broadcast TV effort to keep grandma on the edge of her seat for an hour.

Yep. I'd rather it was just called Lincoln Rhyme or Rhyme and Sachs and just have them solving different crimes. And not all serial killers.