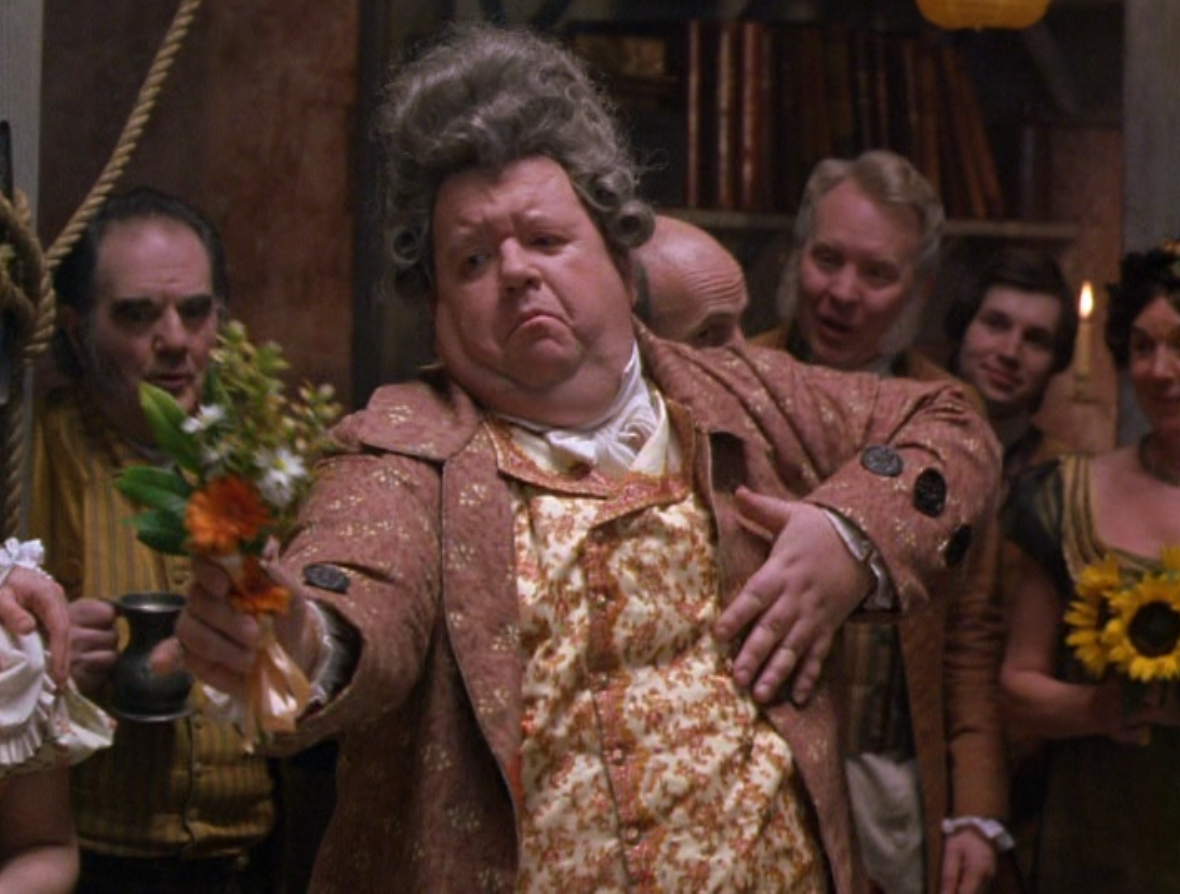 The TNT adaptation plops Scrooge and the Ghost in a narrow, deserted street in front of a building that says "Albert Fezziwig and Company" over the door. I think this is the only version that gives Fezziwig a first name?

Scrooge is quite pleased to see it and leads the way to the front door. He pauses for a moment before opening it, savoring the moment and excitedly anticipating what he's about to revisit.

There are a few other employees in the warehouse, with Fezziwig on a raised platform standing at a tall desk. His wig isn't Welsh, but it's the most elaborate I've seen yet with a high, bouffant shape and ridiculous little curls at his temples. He's also probably the most overweight Fezziwig so far. I recognize actor Ian McNeice from Ace Ventura: When Nature Calls and - more recently - Winston Churchill on a few episodes of Doctor Who.

When he announces closing time to Young Ebenezer and Dick Wilkins, Old Scrooge gasps at the name of his friend. "Why bless me, there he is..." He says the line about Dick's being attached to him, but there's no "poor Dick" and Scrooge clearly remembers the friendship as mutual. He's very pleased to see Dick again.

Fezziwig comes over to Ebenezer's desk to make him and Dick stop working. He pours some kind of powder over the ledger that Ebenezer is frantically trying to finish up. A little research tells me this was probably pounce, used both to dry ink and prepare rough paper for writing. It's a nice detail.

Dick scurries off to put the shutters up as Fezziwig's requested, but Ebenezer quickly completes his task before leaving the desk. He's smiling as he does it though. The ledger was important, but Ebenezer is definitely in the spirit of the evening. When he leaves, Old Scrooge remains at the desk, looking at the open ledger and other papers. He smiles and nods with satisfaction, as appreciative of reliving this work as he is of being here on this night. These were clearly good times for him. His earlier disbelief has left him. He wants to witness this scene. Like Albert Finney's version, this will be the scene that really starts Scrooge on the road to transformation.

We get to go outside and see Dick and Ebenezer putting up the large, removable shutters. And then it's back inside where the furniture has been cleared away and people are bringing out food for the party. "We're ready, ladies!" calls Fezziwig.

Mrs Fezziwig appears on a gallery that must connect the warehouse with the Fezziwigs' home. Or maybe the rest of the family was already at the warehouse, but hidden away upstairs for some reason. Mrs Fezziwig is just as big and ridiculous as her husband with lots of lace and flowers and curls surrounding her head. "Splendid woman, Mrs Fezziwig," the Ghost observes.

Scrooge observes the Fezziwig children coming down the stairs, too. There are the three daughters, and they get names: Marigold, Daisy, and Lily. Neither Scrooge nor the Ghost call it out, but there are young suitors at the foot of the stairs to greet the girls with flowers. There's also a young son, Eli, in an outlandish wig to match his father's.

Eli makes a beeline for Ebenezer and begs him to "do the trick." Ebenezer eagerly complies, pulling a coin from behind Eli's ear. The dancing starts shortly after that and Ebenezer just as enthusiastically joins in that. He dances with girls and he also dances with Dick in a joyously energetic display. There's a fiddler naturally, but also a clarinet and a serpent, another lovely 19th Century detail. They're not on Fezziwig's desk, of course, but up on the gallery where Mrs Fezziwig and her kids were earlier.

Old Scrooge watches all of this with a scowl, but the camera pans down to betray that he's tapping both feet in a private, whimsical, little dance of his own.

With that dance finished, Mrs Fezziwig has Ebenezer persuade Fezziwig into a song. "It wouldn't be Christmas without you performing, Mr Fezziwig!" he laughs. And he laughs even harder when Fezziwig, who clearly wanted persuading, fake-reluctantly agrees. Old Scrooge remembers, "I could always coax him into it."

Fezziwig's song is as silly and dramatic and fun as he is. It's about wanting to marry a woman named Rose (probably Mrs Fezziwig's real name considering how they also named their daughters) even though her relatives are horrid, because he's not marrying them, he's marrying her.

That done, Fezziwig announces another dance: not the "Sir Roger de Coverley," but the "Portsmouth Polka." Ebenezer sits this one out, which means that he's waiting by the door when a beautiful woman enters wearing a bright, yellow dress. It's not the color I expect at a Christmas party, but she stands out in the best possible way. It's the color of sunshine and happiness. Ebenezer walks over to greet her and it's downright sensual the way he unties her cloak for her. From across the room, Old Scrooge also notices her enter and stands up, stunned by the memory of her.

She and Ebenezer kiss as the polka winds down and the band starts a slower tune. Belle and Ebenezer dance and they're easy in each other's company. Lots of loving eye contact. Old Scrooge sits back down and rests his head on one hand at his old desk. "Fezziwig once said to me," he recalls, "'Ebenezer, when happiness shows up, always give it a comfortable seat.'"

"True," says the Ghost. He was on the other side of the room by Belle and Ebenezer when last I noticed him. And Scrooge seems to have forgotten about him as well. He's up on the gallery now, looking down at Scrooge. And though I read Scrooge's Fezziwig quote as being more about Belle than Fezziwig, the Ghost takes the opportunity to undercut Fezziwig's generosity like he does in the book. It's an awkward non sequitur, but it gets the scene back on track with Scrooge defending his old master. And Scrooge does so with gusto and downright anger.

When Scrooge finishes his argument, he looks confused and defeated for a moment. The Ghost asks him what's wrong, but in this version Scrooge isn't thinking about Bob Cratchit at that moment. He's still too tough for that. What's bothering him is his comment about Fezziwig's power to make his employees happy and their work light. As I said before, these were clearly good times for Scrooge. But the realization is deeper (and more selfish) than just wishing he could create the same atmosphere for Cratchit. I believe that Scrooge is wishing he could create the same atmosphere for himself. He's wondering why he let himself lose this happiness. And the thought upsets him enough that he questions for a moment whether he really was happy. "Perhaps things seemed better than they really were," he says.

"All this was a lie then," the Ghost clarifies.

"The world changes," Scrooge counters. "You can't trust anything." Maybe it was real, but it wasn't lasting. And of course he doesn't blame himself yet. "But no," he finally admits. "It was just like this right down to the last mince pie and dance."

The Ghost seems satisfied and rests his head against a post and watches Ebenezer and Belle dance. They're alone in the room now and snow is falling, signaling the transition to the next scene.
at December 24, 2019

My favorite version, I think. Or, favorite "real" or "true-to-life" version, since I do love Mickey's Christmas Carol, a lot. :) Stewart is just so great in the role.