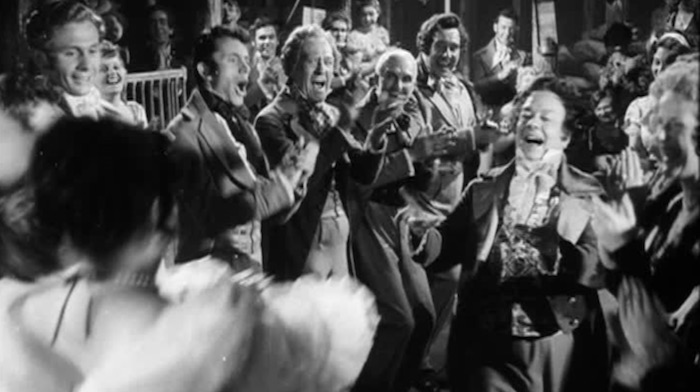 Alastair Sim's classic version skips right to Fezziwig's party in full swing by the time Old Scrooge and the Ghost arrive. It breaks the scene into two sections: the dance and then Young Scrooge in love. But where some previous versions that introduce Belle have neglected Fezziwig, this one pays attention to both.

Fezziwig is a lovely, joyously uninhibited little man with an endless grin. I don't think he's wearing a wig, but his hair is excessively curly (whether natural or something he's done on purpose). We never see his desk, but wherever it is, the fiddler isn't sitting at it. He's on a stool in the foreground. The dance is a raucous affair though with lots of stamping feet and people looking on and clapping from the sidelines and on balconies around the room. It looks like a great time.

Since there's no getting ready for the party, Dick Wilkins is never named. Which probably works in this version's favor. The schoolroom scene was especially sad and emphasized Young Scrooge's deep loneliness. He felt that no one but Fan ever cared for him. That would be undermined by a faithful chum like Dick in Scrooge's life. We'll see of course that Fezziwig has been nice to him, but it's a general kindness that Fezziwig extends to everyone, not a special, particular relationship with Scrooge. And we'll also see that Scrooge is in love with someone who also loves him, but that relationship is the exception that proves the rule. Scrooge's brief happiness in love only deepens the tragedy of his monumental loneliness.

We're not thinking about that right now though as Old Scrooge beams at the party and remarks what a kind man Fezziwig was. That cues the Ghost to question the assertion and Scrooge of course defends his old boss. Fezziwig's special attention to social outsiders isn't explicitly mentioned, but Scrooge says that Fezziwig's generosity affected not only his employees, but "everybody who knew him." During all of this, Sim's Scrooge never appears angry or put off by the Ghost's comment. He's still enjoying himself and he's not so much defending Fezziwig as simply stating what he knows to be facts. He only stumbles when he says that the happiness Fezziwig brought was as great as if it had cost a fortune. The word "fortune" pulls him out of the pleasant memory.

The Ghost notices something wrong and coaxes Scrooge into sharing. Sim is so wonderful as he dismisses that there's something really wrong, but admits, "Just that I'd like to have a word with my own clerk, Bob Cratchit, just now." His face and the music sell the moment. This is something that Scrooge is really feeling. And I love the Ghost's pleasantly satisfied expression at the progress that Scrooge has made. He decides that Scrooge is ready for another scene, though still at Fezziwig's party.

In a quiet corner away from the revelers, Young Scrooge is proposing to a woman. Her name is Alice, not Belle, for some reason. George Cole plays the younger version of Scrooge and he's great. He's a young man who knows that he has a lot of work to do in becoming financially stable and he's concerned about it, but he's also very much in love.

Alice teasingly refuses at first, but it's clear she's not serious. She's just enticing assurances out of Scrooge that he won't have a change of heart toward her some day. He seems equally concerned about money and her, but the attention he gives to money worries her enough that she wants to have a conversation about it before she accepts his proposal. He's able to reassure her though (very eloquently thanks to the script and convincingly thanks to Cole) and she whole-heartedly agrees. I think he's completely sincere at that point in his life. He sees in Alice an attitude towards money that he wants for himself. "I love you because you're poor, not proud and foolish." It's beautifully subtle, but I read that as Scrooge admitting to himself that he's proud and foolish, but doesn't want to be.

As he puts the ring on her finger and makes further promises about "eternity," Old Scrooge turns away, plainly hurt by the memory of how this will all turn out. "I've seen enough," he says.

"Yet more awaits you," says the Ghost.

Scrooge snaps at him. "I won't look!"

The Ghost takes no pleasure in ordering, "You shall." And a new scene begins to fade in.
at December 18, 2019

I haven't seen this version in a very long time, but it does seem like they do a good job reinventing it to work in getting the points across. Hope you have a very Merry Christmas, Michael!

Thanks! I hope yours was very merry as well. We had a lovely time with family.

I got behind on the blog due to my tech difficulties, but I'm still planning to finish up over the next week or so.