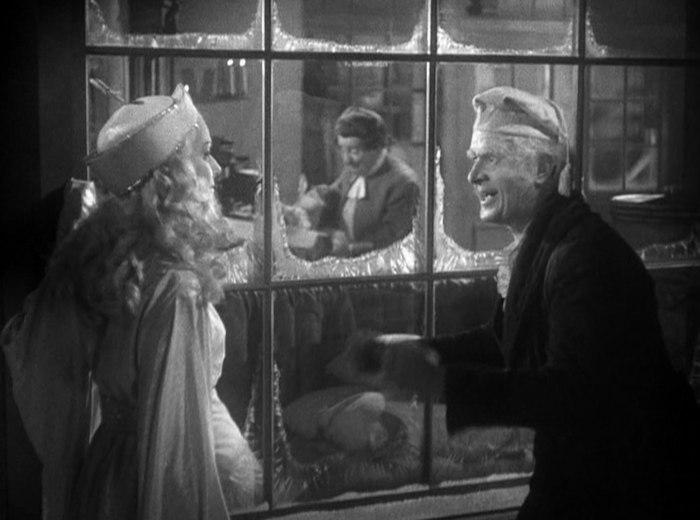 The 1938 Christmas Carol does something very different with this year's scene, but it's all in service to communicating the actual point of the scene well. Certainly better than the last couple of adaptations we looked at. There's been a trend of using Fezziwig's just to introduce Belle and identify the stakes involved when she and Scrooge break up. But the Reginald Owen film keeps the focus squarely on Fezziwig and his relationship with his employees.

After a standard, fade out/in transition from the schoolhouse to the streets of London, the camera lands on the warehouse of J Fezziwig and Company. Outside, the Ghost and Scrooge see Fezziwig working through a big window. His desk is normal sized, but he's a paunchy old gentleman with an outdated brown wig. Old Scrooge is thrilled to see him.

Fezziwig happens to look up at the clock and see the time, so he finishes up what he's doing and calls in Ebenezer and Dick. After faking like he's upset with them, he reveals that he's "angry" because they've let him work them 5 minutes past closing time. And on Christmas Eve at that. This Fezziwig isn't shutting up early for a party, but he does ask the boys to close up shop as they normally would. And part of that does involve going outside and putting up removable shutters as Dickens described it.

I wanted to pay especially close attention to Scrooge's relationship with Dick Wilkins in this version, because the previous scene revealed that they were also schoolmates and good friends as children. There's nothing in the dialogue this scene to suggest a special attachment between the two, but as they shut up the windows the boys clearly enjoy each other and have a fun, bubbly conversation about how awesome Fezziwig is.

This underlines something I've been thinking about over the last couple of adaptations. I expressed earlier that I felt there might be a story behind Scrooge's recognition of Dick's attachment to him and his suggestion that he pitied Dick for some reason. I wondered if something bad happened to Dick that made Scrooge regret not treating him better. In Owen's version, the friendship is clearly mutual (no "poor Dick" here). So contrasting that with the other versions, I wonder if Scrooge's lack of attachment to Dick in those versions wasn't so much specifically about Dick as it was just about Scrooge's not being able to connect with people in general. Maybe his childhood experiences in school and with his father just made him withdraw. So "poor Dick" isn't necessarily about something specific that happened to Dick, but just symbolic of Scrooge's general remorse for not being able to connect to people at all. That's not the case in this version, but Scrooge's friendly relationship with Dick here helps make more clear what I think I've noticed in the others.

Since Fezziwig isn't throwing a party after work, his conversation with the boys goes a different direction. It's pretty much the opposite of Scrooge's earlier conversation when he closed up with Bob Cratchit. Like before, Fezziwig pretends to be serious as he says, "Now about tomorrow..."

The boys get very serious, too.

He wags a finger at them. "It's a holiday of course, but I shall expect you to spend part of it at least with me." He pauses for a beat to let them sweat. "Eating Christmas dinner!" They're overjoyed. We know that at least Scrooge's family lives in the countryside and the same may be true of Dick's. And Fezziwig says that if they eat too much to be any good the following day, "We'll make that a holiday, too."

I love this Fezziwig's sense of humor. It's a missed opportunity that Owen's Scrooge doesn't wait until after Christmas to reveal his change to Cratchit, because that scene (as Dickens wrote it) would suggest that Scrooge picked up his warped humor (pretending to be angry and then announcing that he isn't) from Fezziwig. But since this version had Scrooge fire Cratchit on Christmas Eve, Cratchit won't be going in to work at all on the 26th.

Fezziwig also tips the boys a gold sovereign each as a Christmas bonus before leaving, sparking the apprentices to praise him some more.

Outside, Old Scrooge is thoughtful, but he denies at first that anything particular is wrong when the Ghost questions him about it. She pulls out of him that experiencing Fezziwig's kindness again has bothered him, but that's all he's willing to offer. She points out gently, but bluntly that "perhaps you feel that you'd like to repay his kindness to you."

"You have a clerk, Bob Cratchit. Old Fezziwig would have been very happy if you had shown your gratitude to him by showing kindness to others."

This is a sad, but realistic regression in Scrooge. I thought before that he was going to have an easy transformation. The early scenes showed him to be a lonely man who seems to be interested in human connection, but doesn't know how to appropriately ask for it. I noted that he may even think that he's putting signals out, but his abrasiveness keeps people away. I think that's what's going on here. Scrooge is thoughtful and wants to change, but he's got a lifetime of defenses that aren't going to be dismantled easily. That's probably why this Ghost doesn't rhetorically criticize Fezziwig in order to bait Scrooge into defending him. That tactic probably wouldn't work on this Scrooge.

There's a little more dialogue in this scene, but I'll save it for next year. Not only is Fezziwig's party absent, but the entire character of Belle is, too. Instead, the Ghost will crankily and impatiently sum up Scrooge's subsequent years for him.
at December 17, 2019

Makes sense for Scrooge to have a hard time letting those built up defenses go, after so long. And since there are still two more ghosts to go, we don't need him all set to change right off the bat.