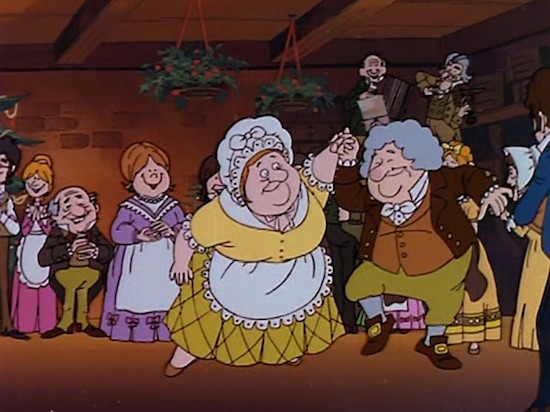 Rankin-Bass' version skipped over the schoolhouse scene and had the Ghost fly Scrooge directly to Fezziwig's. The party is already in progress, so Dick Wilkins is not mentioned, nor are any of the partygoers named. Even Fezziwig himself is never named, though we see his name on a sign at one point. The old fellow is dancing at the party with his wife, but you already have to know who he is. He's jolly and fat and has white curly hair. He might be wearing a wig, but if he is it's neither Welsh nor one of those traditional pig-tailed wigs.

The fiddler is up on a desk in the background, but the focus of the scene isn't on the party at all and especially not on Fezzziwig. In fact, this could be any Christmas party. What the scene really cares about is Young Scrooge's relationship with Belle, whom he's dancing with. Old Scrooge remembers that he and Belle had gone outside to cool off after the vigorous dance and we get to hear their conversation. Belle wants to get married right away, but Scrooge wants to put it off until he's more financially secure. They sing a song about their dreams: hers of a humble little cottage and children; his (which we see represented onscreen) of a large, golden mansion and no kids.

Old Scrooge is very upset by all of this. He's been frightened since Marley and is willing to change; he just doesn't know how. He knows what's coming next and he dreads seeing it. He's really being torn down by this.

With all that going on, the Ghost doesn't bring up Fezziwig's relationship with Scrooge or lead Scrooge to compare it to his own relationship with Bob Cratchit. Scrooge's impetus to change so far hangs all on his putting money before love, but specifically romantic love. Which, if you're going to simplify the story, isn't a bad way to go. The money vs love choice is the heart of A Christmas Carol. Eventually Rankin-Bass will need to translate Scrooge's emotions about Belle to a more general love for humankind, but we'll see how (or whether) they succeed in that.
at December 11, 2019

You are right, even they need to abbreviate it, I guess that is an okay way to go. Not a fan of so much of Dickens' great work just left out, though.