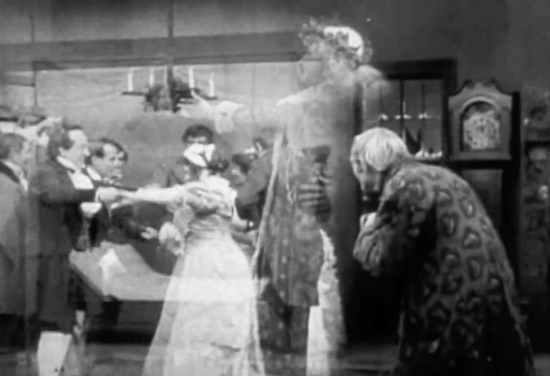 In keeping with its limited budget and just general shortness (the whole film is less than 14 minutes long), Thomas Edison's silent Christmas Carol hits this scene quickly and all in Scrooge's room. The Spirit of Christmas (one ghost for all three time periods) simply calls up vignettes for Scrooge to look at. After the confusing (if you don't already know the story) schoolroom scene, Scrooge is despondent. But he perks back up again when the Spirit shows him visions of people getting ready for and then having a party.

Old Scrooge bounces and claps his hands throughout, but like the previous scene, there are no intertitles to explain what's going on. There's definitely one man supervising and moderating the activities, so those of us familiar with the tale know this is Fezziwig. He's a plump, jolly fellow, but he wears no wig of any type. And though there's a tall desk and a stool in the room, Fezziwig never sits at it.

Two young men do the cleaning up. One is shown more prominently than the other, sweeping the floor. This must be Young Scrooge. The other fellow (I almost said "unnamed" fellow, but they're both unnamed) is probably Dick. But without any dialogue, he's just another employee. No hint at a special attachment.

The young men are barely out of the way when the guests arrive. There are men and women of various ages, but of course we don't know if or how Fezziwig is related to any of them. A fiddler comes in and hops up on the desk and the party begins. The fellow who was probably Young Scrooge talks to a couple of women at the party, but partners up with the second one for the lone dance we get to see. As he and his partner follow the others offscreen, Young Scrooge gives her a quick kiss. So she could be Belle, though it's hard to tell in my print of the movie if she's the same woman who's in the next scene. I can't even 100% tell if it's the same actor playing Young Scrooge. It could even be Marc McDermott playing both Old and Young Scrooge. He was in his 30s when the film was made, so that would make sense. He's the only actor credited as playing Scrooge in the film.

So let's say that is Belle with Scrooge. Even though it's not what Dickens wrote, I feel like that's a pretty solid bet. The production doesn't seem like it has the scope to have two different characters in a relationship with Scrooge. The question then is: what's the point?

The last intertitle we got said that these were "incidents of [Scrooge's] youth and early manhood." There's not even a judgment about whether they're positive incidents or negative. The schoolhouse scene reminded him of his love for his sister and seeing her again made him first happy and then mournful, like he was in grief. He's happy all the way through the Fezziwig scene. So if nothing else, the Ghost is at least getting some emotion from Scrooge, which is at least progress. So far, Scrooge has mostly rejected the spirits' help and acted like their appearance was an inconvenience. Even at a very basic, broad level, we can tell that Scrooge has become engaged in what's going on. He's being reminded of past connections with other people.

My question about the next scene is what lesson Scrooge will take from it. Depending on how well the film communicates Scrooge and Belle's breakup, Scrooge could realize that his lack of current connection is all his fault. But if the reason for the breakup is unclear (meaning that Belle could possibly have instigated it through no fault of Scrooge's), then Scrooge could conceivably be justified in withdrawing further from other people. But that's next time. We'll see how it goes then.
at December 14, 2019

I am surprised they actually get so much of the gist of the scene, I guess, in such a short version! And hey - did the blog change wildly or is it me? Interesting!

Heh! It's not you. The old format was creating problems for me on my home computer. The site itself would completely freeze up on me for some reason. That's what put me so far behind schedule on these posts, sadly.

Changing the format seems to have fixed whatever problem was going on, but I'll probably continue to tweak. I'm not completely happy with it yet.