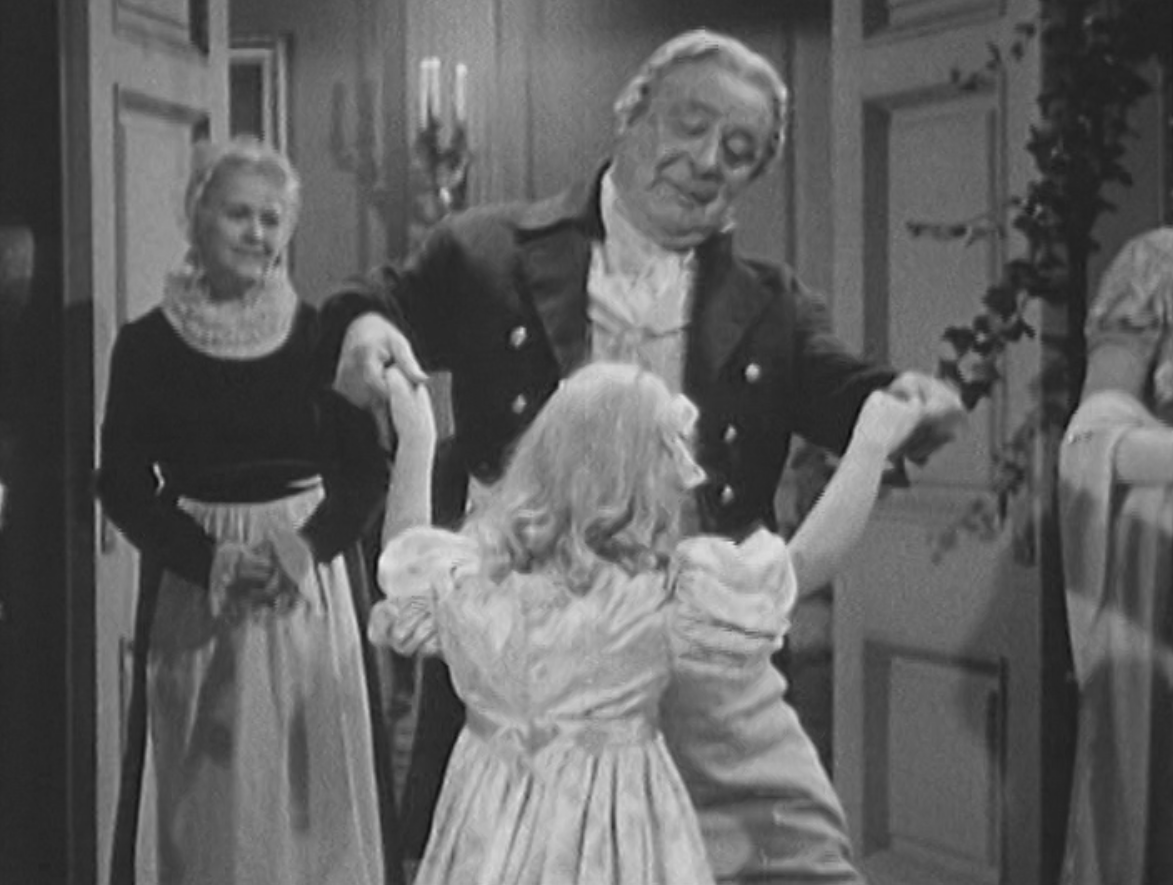 The Shower of Stars adaptation does something very different with this scene. Rather than have it take place in Fezziwig's warehouse, it places the party at what appears to be Fezziwig's home: a large, expensive place with marble floors and chandeliers and a gorgeous, garlanded staircase leading to upstairs rooms. The party is already in progress and everyone is well-dressed in tails (or military dress uniforms) and evening gowns. A servant in livery and a white, powdered wig circulates among the guests, offering them refreshments. Instead of a fiddler, there's a sextet that includes a harp and oboe alongside the standard strings.

Fezziwig presides over the festivities mostly from his chair, sitting next to a woman Scrooge identifies as Fezziwig's wife. Fezziwig gets up to dance a couple of times, once with a young girl who's probably meant to be his daughter, but looks more in grand-daughter range. Then a pretty party guest invites him to take a spin and he does. He's a hefty, old nobleman with a powdered wig, but jolly and game and he's thoroughly enjoying himself and the pleasure he's bringing to his guests.

Scrooge spots Dick Wilkins at the party, but only mentions that they were apprentices to Fezziwig. In lieu of a scene where Fezziwig has them shut up the shop, Scrooge simply quotes his former master. "No more work tonight! This is Christmas Eve!" It's hard to imagine this Fezziwig overseeing a rustic, old warehouse and I imagine that this Scrooge and Wilkins may have worked from Fezziwig's home or at least from a posh office.

One unfortunate effect of the change in venue is that none of the party guests seem remotely like social outsiders. This appears to be a fancy event put on by a wealthy person for other wealthy people. Or at least it does at first.

Old Scrooge spots his younger self at the punchbowl, looking as dapper as everyone else. When he serves another guest half a cup of punch, there's some foreshadowing of the man he'll become as she complains, "Ebenezer, don't be stingy with the punch." He doesn't seem to have done it out of actual stinginess. And you can read it where she's not actually accusing him of stinginess, but is just being kind of awkwardly playful. In fact, he does appear to have been pouring the cup for himself and then offered it to her out of politeness when she interrupted him. But I have to believe that the association between him and stinginess is absolutely intentional. And the rest of the scene bears that out.

As he fills the cup up the rest of the way, another woman asks him why he's not dancing and he lets her know that he's waiting for Belle. The two women giggle over the idea of Ebenezer in love, so apparently he does have a reputation as someone who usually doesn't place a lot of value in romance.

Belle appears just then and apologizes for being late. "We were very busy at the shop," she says. So she's some kind of clerk herself. We don't find out in this scene (if at all) how she knows Fezziwig, but her presence at the party does suggest that not all the guests are aristocrats. For all his wealth, Fezziwig isn't a snob about whom he invites.

Belle is well-known to the other guests, too. One of them requests a song from her and she agrees on the condition that Young Scrooge joins her. They sing a lovely duet (both actors have excellent voices) about what to get each other for Christmas, with the suggestions being things like smiles and kisses that lead to "a golden ring" and "the ground-floor plans for a castle in Spain." They seem comfortable and happy in their love, but they also have dreams and plans. At this point, it seems like they share them, but knowing what we know about how their relationship will turn out, I suspect that these are dreams for her and plans for him. That's getting ahead of the scene though. The song ends with applause by the guests and the singers kissing under mistletoe held by Fezziwig himself.

With the sappy stuff out of the way, Fezziwig announces that it's time not for the "Sir Roger de Coverley," but for the polka. Old Scrooge is pleased by all of this. He looked wistful a couple of times when watching Belle, but he's snapped out of that and focused on Fezziwig's ability to spread happiness. He's about to express a wish (Dickens readers know it would have been about speaking to Bob Cratchit just then), but the Ghost interrupts him.

"Your happiness was short-lived." She directs his attention back to his younger self and Belle at the party. They're in the middle of a disagreement, which we'll listen in on next year, but since it's at the same party, a lot of Scrooge and Belle's apparent happiness there must have been covering some much more complicated feelings that are about to bubble over.
at December 19, 2019

Sounds to me like a good variation on the original scene.