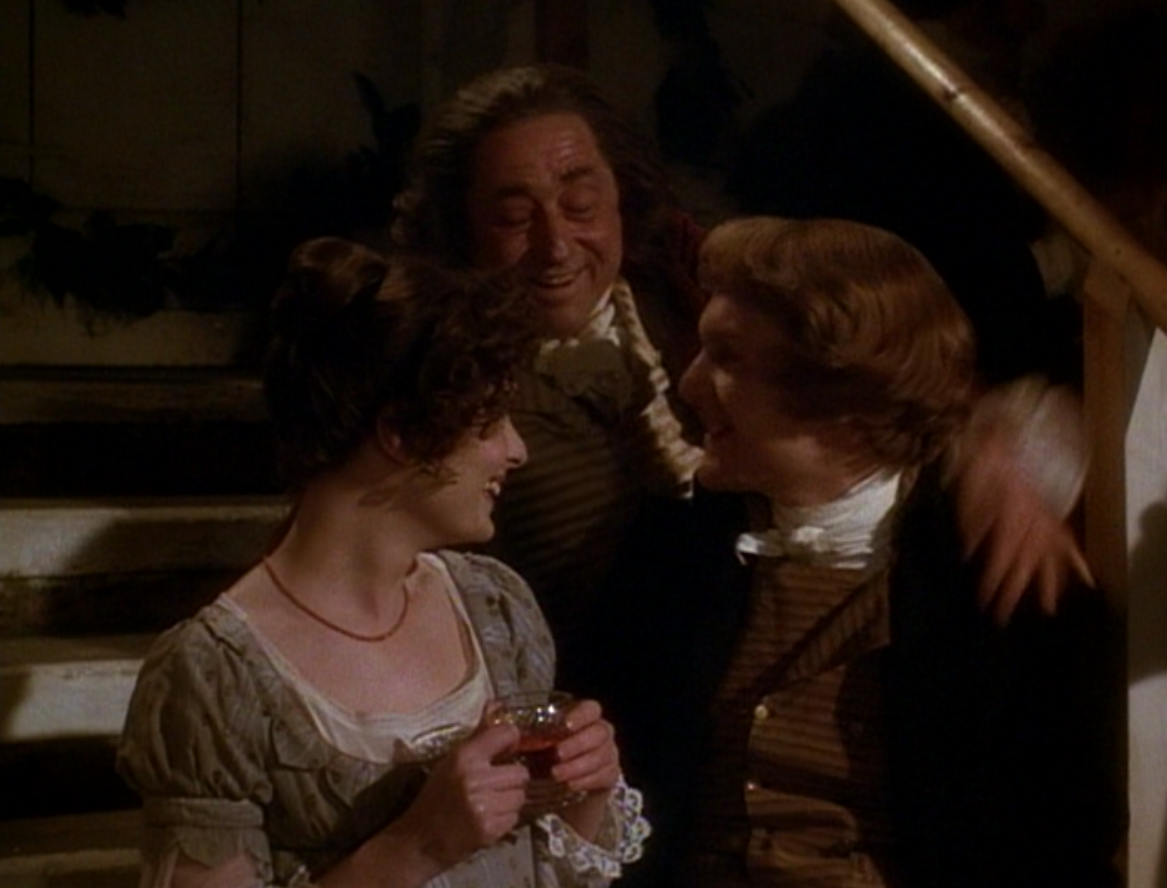 As usual in director Clive Donner's version, the Ghost's snuffing cap is used as a transition between visions. As we leave the school for Fezziwig's warehouse, images play across the cap: people shopping and preparing for Christmas Day and then on Fezziwig and his employees. He's at a raised - but not cartoonishly high - desk at one end of the warehouse floor, writing in a ledger as his employees fold cloth and go about other business. He appears to have his own hair, but it could be a good, brown wig. Not a Welsh wig though. He pleasantly instructs a young woman to have Mr Pooling (I think?) talk to Mr. Scrooge about whatever book she's holding.

As she goes off to obey, Fezziwig gets down from his desk and reveals that he's a delightfully tiny man. He lets everyone know that it's time to stop working, because it's Christmas Eve. He particularly instructs Dick and Ebenezer to set down their pens, presumably because they're extra industrious and need to be personally ordered. Everyone's going to help clear the room, not just Dick and Ebenezer.

As Young Scrooge grabs some cloth to carry it away, Fezziwig playfully orders him to enjoy himself at the party. Ebenezer smiles and says that he'll try. The conversation goes on, but the gist is that Fezziwig wants Ebenezer to get more out of life than just the conducting of business, though Ebenezer is clearly very good at business. Ebenezer seems willing to learn.

The scene cuts to final decorations and the big buffet spread as Mrs Fezziwig enters with her three daughters and their suitors. Old Scrooge laughs as he identifies them. He's clearly enjoying seeing these faces again. And his face softens even more when he sees Belle enter with some rolls that she places on the buffet. His eyes moisten and he looks stunned. "I'd forgotten how beautiful she was." And he's right.

Young Scrooge comes up behind her and asks her to dance. He's not especially animated, but he's not awkward like the Young Scrooge in the Albert Finney version. He's much more comfortable and confident around Belle. This is a Scrooge who has settled in and made a place for himself.

A fiddler climbs up on Fezziwig's desk and begins the first dance. Fezziwig doesn't even join in this one; the focus is all on Ebenezer and Belle having a great time with Ebenezer even stopping to steal a kiss at one point. Eventually they leave the dance and run off to a corner by themselves.

Old Scrooge is smiling at the party and the memories. The Ghost catches him and asks him how long it's been since he danced.

He drops his grin and turns grumpy. "A waste of time, dancing."

"You didn't think so then."

He's quite serious and thoughtful as he says, "There was a reason then."

The scene cuts to Young Scrooge and Belle as they talk in their corner. Belle notes that Scrooge has changed since he came to Fezziwig's. "You were so gloomy."

"I think I should warn you, Miss Belle. I am of a serious bent of mind." He looks overly serious as he says it. Playfully serious.

She says that she finds seriousness admirable, "but it can be overdone."

"I shall take heed of your advice, ma'am, and go through life with a grin on my face." But he's not quite grinning. He doesn't seem to think that he can actually do it. We've seen him capable of enjoying himself at this very party, and that's all due to Belle's presence. She has that effect on him. But to fundamentally change his personality and worldview? That's a tall order.

Old Scrooge also smiles at the scene, but it's a wistful, rueful smile. He knows that he meant it back then just as he knows that he never achieved it.

Back in the corner, Fezziwig accosts Belle and Ebenezer to get them back in the dance for "Sir Roger de Coverley." Then he realizes that he needs to get back himself and "partner my wife before that young scamp goes dancing off with her!" He puts his arm around Young Scrooge and gives him the second piece of advice of the evening. "What a difference it makes, Ebenezer, to travel the rough road of life with the right female to help bear the burden." He's grinning at Belle as he finishes and she's blushing. Ebenezer looks at her, quite seriously.

She wonders if they should join the others and he takes her hand. "My pleasure, Miss Belle." He is absolutely, deeply in love with her. It's a beautiful scene that really captures the essence of falling in love with someone you don't feel you deserve, but who - against all reason - apparently loves you back. They're such a sweet couple. It's heartbreaking to know how they turn out.

But Old Scrooge isn't thinking about that now. As his younger self rejoins the dance with the love of his life, Old Scrooge smiles like a fool, just enjoying the moment.

The scene then shifts to later that night. The warehouse is empty except for Scrooge and the Ghost. "Old Fezziwig," the Ghost says. "A silly man." And indeed he was.

Scrooge defends him anyway. And the Ghost challenges him further. What did he do to deserve the praises of his employees? "Spent a few pounds? Danced like a monkey? Beamed a great smile?"

Scrooge laughs and explains gently. "The happiness he gives..." He corrects himself, "Gave... was quite as great as though it had cost a thousand pounds." He turns thoughtful. "Just... small things."

He doesn't mention that he'd like to have a word with Bob Cratchit just then, but that would just be spelling out something that Scott's performance already does quite nicely. The schoolhouse failed to create empathy in Scrooge, but he's been touched emotionally by this scene. Not just by Belle, but by Fezziwig as well. This was a time when Scrooge was truly happy and hopeful about his future. But things have not turned out the way he hoped back then.

Cut to Ebenezer and Dick in their bunks somewhere in the warehouse. Ebenezer is staring off into space and Dick doesn't even have to ask what Ebenezer is thinking about. He just stares at Young Scrooge until Young Scrooge laughs and says, "Belle."

"Are you in love, Ebenezer?"

"Mmm. The thought had occurred to me."

"She's too good for you." Dick means it, but there's no malice. He clearly likes Belle, too, though he doesn't really consider himself competition for Ebenezer. She may be too good for Ebenezer, but she also loves him and Dick knows it. There's been no mention of Dick's attachment to Scrooge, but we don't need it. This scene shows us that they're good friends.

"One day!" Ebenezer objects. "When I've made my fortune. Then I'll deserve her."

Dick changes the subject. "It was a night never to be forgotten."

A favorite version of mine, as it is of many. Scott just became Scrooge in this film. Wonderful scene.

My wife and I would always squeeze each others' shoulders or hands (depending on if we were on the couch or in separate chairs) watching this scene, particularly Fezziwig's advice to Ebeneezer regarding Belle and then, as he departs the scene, his cry of "Oh, what a lucky man I am!" referring to his own wife.

She passed away suddenly only a few weeks ago, and I am still reminded by this scene what a lucky man I was to have had her helping me bear the burden upon the rough road of life.

Oh my gosh, Randy, I'm so sorry. I can't imagine what you're experiencing, but what a blessing to have had her in your life. A giant virtual hug to you.