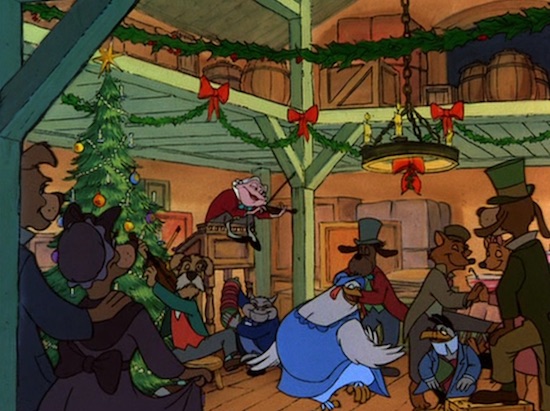 Mickey's Christmas Carol has some things in common with Rankin-Bass' also very abbreviated version. They both skip the schoolhouse scene and have the Ghost take Scrooge directly to Fezziwig's where the party is already in full swing. Mickey's has Scrooge reminisce fondly about Fezziwig though (where Rankin-Bass all but ignored the character).

The sign on the building says Fezziwig Tea Company, which is a cool, added detail. And as Scrooge wipes some soot off a window to peek inside, he admits, "I couldn't have worked for a kinder man." Jiminy Cricket is too polite a Ghost to challenge Fezziwig's service, not even rhetorically, but Scrooge's confession does show that he hasn't forgotten what kindness is. And it's a surprise to hear him speak fondly about it as a character trait.

Fezziwig is played by Toad from Disney's adaptation of The Wind in the Willows, which is a lovely piece of casting. Toad's silly, fun-loving nature fits wonderfully with jolly old Fezziwig. He's up on his high desk wearing a powdered wig and in this version he himself is the fiddler.

But even though Mickey's pays more attention to Fezziwig than Rankin-Bass did, the focus of the scene is still on Young Scrooge and Belle (renamed Isabelle and played by Daisy Duck). Old Scrooge finds his younger self sitting alone in a corner. He mentions that he was a "shy lad," but he seems nothing but pleased to be reliving these memories so far. Isabelle pulls Young Scrooge under the mistletoe, but he's too awkward to follow through on what she clearly wants. They dance instead and she ends by planting a kiss on his cheek, sending him all a'flutter.

Old Scrooge isn't melancholy about this at all. He sighs heavily and says that he remembers how much he was in love with her. It's like he's willfully not thinking about how the relationship ended. He probably doesn't realize that the Ghost is going to take him there to witness that, too. Since this is Scrooge's first stop on his tour of the Past, he hasn't really picked up yet what the Ghost is trying to accomplish.

Mickey's Scrooge was frightened by Marley's warnings, but recovered quickly when the Ghost of Christmas Past showed up. He hasn't really shown the Ghost any respect so far. I get the feeling that he knows he needs to change, but he's testing to see just how little he can change and still be okay. There's even a line in this scene where the Ghost notes that Young Scrooge hasn't yet become "a miserable miser consumed by greed." To which Scrooge replies, "Well, nobody's perfect." He tosses that out so playfully that I don't know whether or not he even believes it, but maybe that's the point. He's still trying out these old attitudes to see what will fly and what won't anymore.

The Ghost never takes Scrooge's bait though. He simply announces that he's about to contrast what Scrooge had with what he eventually lost.
at December 12, 2019

Excellent casting, for sure. Disney really gets it all done to great effect in a short time.