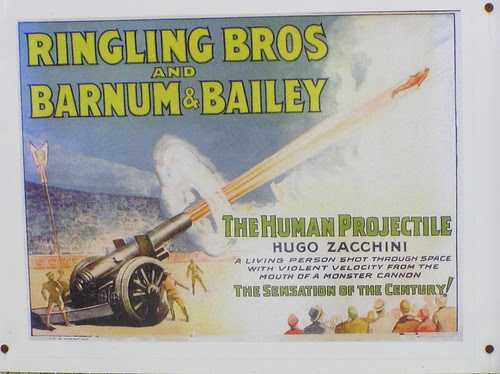 P6110045, originally uploaded by MichaelMay.
Diane had the day off on Wednesday and wanted to spend it hanging out in Baraboo. We found a park with a small zoo attached and had a good time wandering around the town square where we ate lunch, bought some candy, and I found an old copy of Porto Bello Gold at a cool, little bookstore.

We also tried visiting the Circus World Museum that's located on the grounds where the Ringling Bros. used to winter their show. Why anyone would want to winter in Wisconsin when they've already got a headquarters in Sarasota, Florida is something I hoped to learn, but unfortunately the museum was closed. Remember Lake Delton's emptying out on Monday? The waters had reached Baraboo and were threatening the outdoor parts of the circus museum. You can click on Hugo Zacchini above to see what it looked like.

(Incidentally, some Googling tells me that Baraboo was the home of the Ringlings and starting in 1884 was the first winter headquarters for the show. John Ringling moved the HQ to Sarasota in 1927 with at least one other HQ location - Bridgeport, Connecticut - in between.)
at June 18, 2008