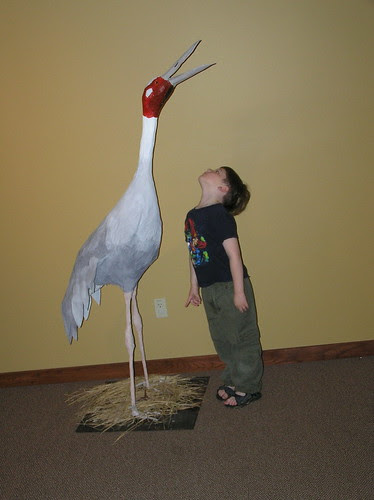 Okay, truly, I'll have some honest-to-goodness content later today. Just want to make sure I stay on top of posting these.

On Monday, Diane had the morning off so we went to the International Crane Foundation near Baraboo. We actually did most of our sight-seeing in Baraboo this trip. I sort of hate the Dells themselves (except for a couple of attractions I'll talk about later in the week) and small town Baraboo is a wonderful get-away from the kitschy, tourist-trap madness of the Dells.

So anyway, click on David and the crane for more pics from the Crane Foundation.

I should also mention - as long as I'm talking about last Monday - that the weather adventures started on Saturday as we drove to the area. We got caught in a thunderstorm, but I've driven through those before and it didn't worry me. When we stopped at a truckstop for a bathroom break though, we were told that there was a tornado warning in the area, so we hung out for a while drinking coffee and eating pie.

Eventually the weather cleared enough that we got back on the road even though the warning was still in effect. We raced the weather to the Dells and got caught in the thunderstorm again. No twisters though.

I tell you all that to say that on Monday the Dells' big, man-made, recreational Lake Delton overflowed its banks, washed away a small dam and a nearby road, and cut a new channel to the Wisconsin River, completely emptying out the former lake. I'll show you pictures from that and tell you how it affected our trip later in the week.

A description of the project.

Links to all the Christmas Carol Project posts in one place.