I Give Up: A Game of Thrones 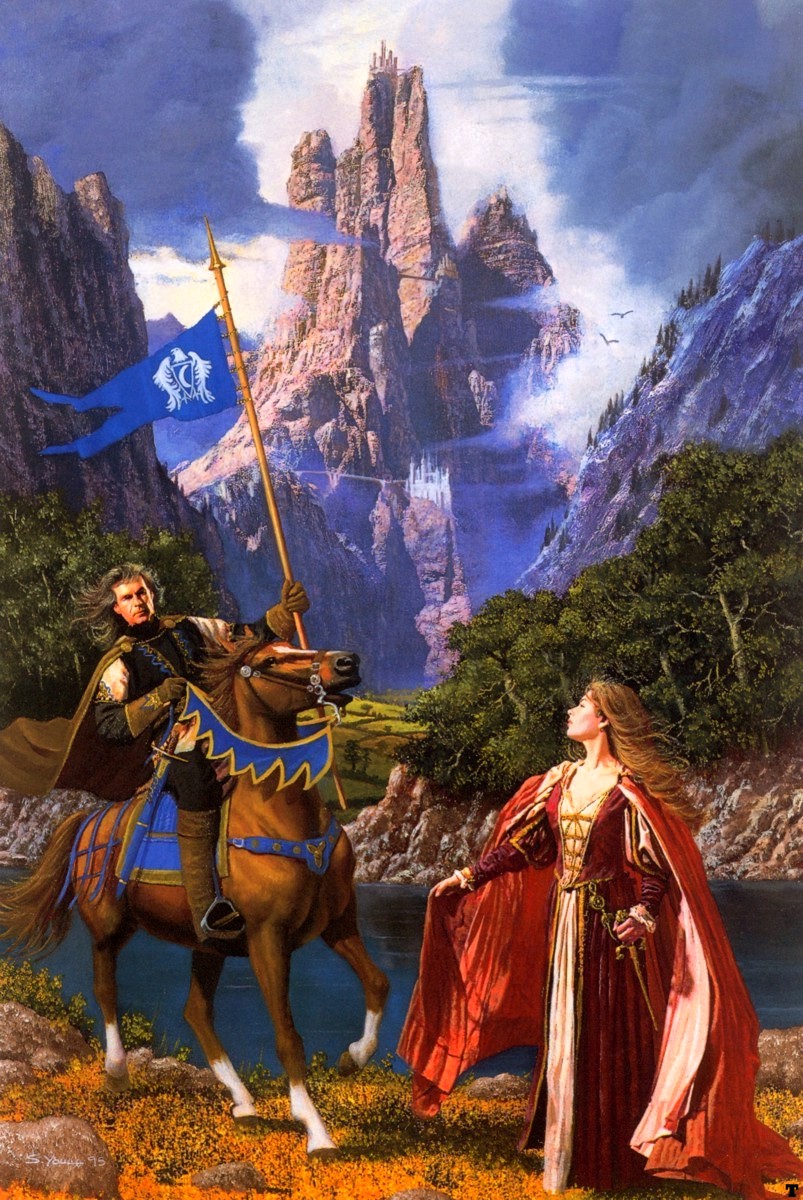 I gave George R.R. Martin's A Game of Thrones about 150 pages, and while no one could ever call it "bad," it failed to grab me. It's the first book in an epic, but it's epic itself in the number of characters that it asks you to keep track of and care about. Keeping track of them all isn't so hard -- Martin does a fine job of making them all memorable in some way -- but I can't care about them all. So I found myself impatiently reading about a spoiled little daughter of nobility and her tomboy sister, for example, when I really wanted to know what was going to happen to their bastard half-brother whose only future seems to be defending a bleak, wilderness wall against terrifying, unseen creatures (but you just know that bigger things are coming for him).

I don't want to suggest that Martin made a bad call in bouncing between members of his large cast. I don't want to suggest anything that makes it sound like Martin's a bad writer, because he clearly isn't. It's just that where my head's at right now, I need a tighter story. I don't know for sure where Martin's taking his Song of Ice and Fire series (of which A Game of Thrones is the first book), but it's obviously somewhere big. And probably somewhere interesting.

There's a lot of intrigue and political manouvering going on in A Game of Thrones and I'm halfway interested in seeing where it all ends up. But I'm much more interested in finding out what happens to that bastard kid and the crippled nobleman who accompanies him to the wilderness wall. I also want to read more about the former princess whose brother sold her to a barbarian warlord in return for military support in an endeavor to regain the brother's throne. Boy, I have a feeling that the brother's going to regret that.

I also have a feeling that I'll be coming back to A Game of Thrones when I'm able to be more patient with the parts that I'm not as into: the strained friendship, for instance, between a king and his right-hand man. Or the training of a young nobleman whose father has left the family holdings to fulfill his duty elsewhere in the kingdom.

But for now, I need something that moves faster and is more plot-oriented. I'm hoping that Terry Brooks' Armageddon's Children does the trick.

Email ThisBlogThis!Share to TwitterShare to FacebookShare to Pinterest
Labels: game of thrones

I like that rule. I'm not sure why it never occurred to me before, considering my policies regarding comics and movies. Maybe it's because I've had an occasional habit of just flipping through the book after that point, so I'll at least know what happened to the characters.

I'm pleased to see my rule catching on! I had to enact it again last night, sadly...

I'd ask what book fell prey to it, but I guess I can wait for the review. :)

I use that rule all the time, though for me its usually 50-60 pages in that I bail if things dont get cooking.

Give Game of Thrones a full read. I couldn't get more than 1/3 way through it the first time and put it down for a year or so. I went back and re-read it and now I'm a card carrying Song of Ice & Fire fanboy.

very good rule. it's funny that you bring up "A Game of Thrones." i have tried to read that book 3 times and have not been able to complete it. i don't know why i kept trying.

i guess i have been itching to get my hands on a good fantasy series.

I just picked up "Cell" by Stephen King and i have passed page 100, so i guess this one will be completed.

"Give Game of Thrones a full read. I couldn't get more than 1/3 way through it the first time and put it down for a year or so. I went back and re-read it and now I'm a card carrying Song of Ice & Fire fanboy."

Funny you should say that, because I went to put it away last night and wasn't able to do it. I'm interested enough in Jon and Daenerys that I'm going to leave it out and sneak reads in around other things.

I'm also pretty sure that I'm going to like future volumes more when the kids in this volume are presumably older and more interesting.

"i have tried to read that book 3 times and have not been able to complete it. i don't know why i kept trying."

Its your loss I fear.

Without revealing too many spoilers I can tell you that the cast will slowly shrink with time.

Grab the audio book read by Roy Dotrice if you're curious of it but lack the patience to read. I'm not the best reader myself but after listening to the audiobooks of this series I'm completely stuck.

Its the best fantasy out of raw nature that I've come across so far.

That's not a bad idea about the audio-book. I figured I'd jus wait for the inevitable movie or graphic novel adaptation, but I may give the CD a try.

I think I just need to experience the story a different way so that I'll be enticed to come back and try the novels again.

Without revealing too many spoilers I can tell you that the cast will slowly shrink with time.

Oh yeah! And for me thats what makes this series stand out from most other fantasy series. The red wedding is a nice example of this...

You can't get through a game of thrones?! That's the best book I ever read. I just finished it. Can't wait to read the next book. Nothing interesting happens to Jon in the first book. Daenerys? Yeah her brother does regret it, except you can't really regret something once your dead.

I like the rule. I didn't have a problem getting through Martin's first book, though I agree the stuff about the sister kind of detracts from the "good stuff". But I had to call it quits on Martin's series after the second book. It was long, and nothing happened. One of those books I looked back on from beginning end and thought, "What's happened here?" The answer: "Not much." Given the epic length the entire series promised, I'm not willing to expend that much time and energy on something that doesn't move the story along enough to my satisfaction. Just my opinion, of course. I know a lot of people really like the series.

I'm almost to a feast for crows, and I can't wait for the HBO series to comeout. It's worth it to finish the book, you just need patcience (skip sansa if you want, she's not really important till A Clash of Kings, and even then barely.)

Any regrets yet for giving up on this?

Not yet, but the DVD is just about to the top of my Netflix queue. I fully expect to love the TV series and will probably give the books another try once I'm caught up.