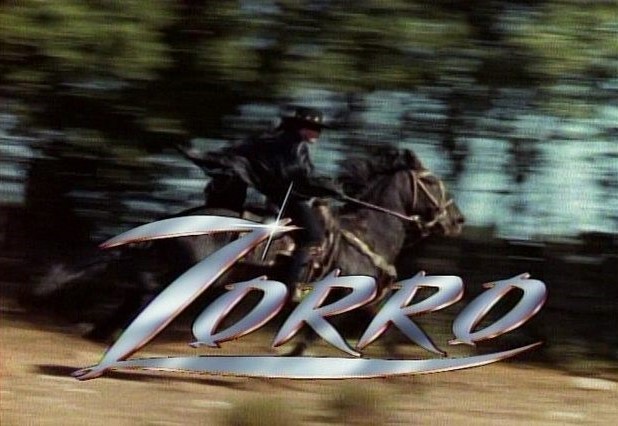 What's it about?: Zorro returns to live-action TV on The Family Channel.

How is it?: I was initially skeptical about the quality of The Family Channel's Zorro. The money-making channel had legally separated itself from the non-profit Christian Broadcasting Network by the time this came out, but it was still being run by people associated with CBN and my perception was that it was going to be ultra- tame and family friendly. Not that Zorro is an edgy character, but I expected the CBN version to be especially cheesy and moralistic.

Contributing to my expectation of goofiness was the casting of Duncan Regehr as Zorro. Regehr is a good-looking guy, but he's more soap-opera handsome than ruggedly dashing. I expected a lot of mugging for the camera and Joey Tribbiani "smell the fart" faces from him.

Watching the show for this project, though, I enjoyed it quite a bit. There's a lot of quick editing to hide cheap stunt-work, but I'm used to that from other '90s adventure shows like Xena and Conan the Adventurer. And while the show can be cheesy, it's charmingly cheesy in the same way those other shows are.

There are 88 episodes if you don't count the pilot (and you shouldn't, for reasons I'll get into), so I didn't watch the whole series. But I watched the pilot and the first episode and then several other episodes from among the show's four seasons. These weren't really random; I picked them for particular storylines or guest-stars that I wanted to see. I got a good sense of the show and if it were more easily available to watch than just on YouTube, I'd be interested in going back for a complete look at some point.

The pilot is almost completely different from what the show would become. It stars an actor named Patrick James (this is his only acting credit), not as Don Diego, but as a new character who takes on the identity of Zorro after the aging Diego is mortally wounded in action. It's not good. Thanks to Zorro: The Gay Blade and the Antonio Banderas movies that we'll get to later, I'm used to the idea of Zorro passing on his mask to a younger hero. So the premise doesn't bother me, but James isn't charismatic enough to play a swashbuckling hero. The costume is also shoddy and I groaned when the climax had Zorro ride a homemade hang glider into battle.

Thankfully, the actual show recast almost everyone and even took a more traditional approach to the legend, so Regehr is actually playing our beloved Diego de la Vega. I say they recast "almost" everyone, because one actor from the pilot does return, although as a different character. That's Patrice Martinez, who was the aristocratic love interest in the pilot, but is now the owner/operator of the local cantina. Business owner Victoria Escalante is a much cooler role and gives the show the chance to explore some feminist themes as people (not Diego and his family) constantly underestimate Victoria and she stands up for herself.

Another character I like a lot is Felipe, Zorro's mute servant. He's basically the Bernardo character from the books, but borrows some elements from other, earlier TV versions. Like Bernardo on the Disney TV show, Felipe pretends to be deaf as well as mute in order to listen in on bad guys' conversations without their being suspicious. But he's also a young ward of the Vega family, like Miguel in the Filmation cartoon. He's a good-looking kid and an asset to Zorro's campaign. I like him a lot. He even mimes the Z-shape like his Disney predecessor did when he's asking Diego if Zorro will be going into action.

The rest of the characters are pretty traditional. Efrem Zimbalist Jr plays Diego's dad in the first season, but was replaced by Henry Darrow for the rest of the show. Zimbalist is fun, but Darrow is even cooler, especially considering that he'd been the voice of Zorro on the cartoon and played Zorro in the short-lived sitcom series, Zorro and Son.

The evil alcalde was played by Michael Tylo for the first two seasons until the character was killed off and replaced in season three by a new villain (JG Hertzler). Tylo and Hertzler are both great and their characters have slightly different personalities, so it's hard to pick a favorite between them. Tylo's character wasn't exactly bumbling, but he was a guy that Zorro could manipulate without too much trouble. Hertzler's character feels more deadly, but he's also given some unexpected background and motivation that makes him surprisingly relatable.

Finally, there's the Sgt Garcia/Gonzalez character, renamed Mendoza for some reason. He's played by James Victor and is rather unremarkable, but fills in just fine as the slightly overweight, incompetent leader of the alcalde's troops.

A very fun aspect of the show though is all the guest-stars. Jim Carter (Rustlers' Rhapsody, Downton Abbey) played an especially ruthless Spanish officer who was so nasty that he came back later for a second episode. And Daniel Craig was in a couple of fourth season episodes with all his James Bond intensity as the henchman to another villain. Philip Michael Thomas (Miami Vice) had an episode as a free Black man who has to endure bigotry from the alcalde and his men. Warwick Davis (Return of the Jedi, Willow) plays the leader of a dishonest circus in an episode. But my very favorite guest star was Adam West as an inventor named Dr Henry Wayne who is especially impressed when Zorro escorts him (blindfolded, of course) to his secret cave headquarters.

Possibly because an origin story had already been attempted by the never-shown pilot, the first episode of the series doesn't bother going into how Diego became Zorro. Which is fine. Fans already know that story and casual viewers likely don't care. But there is a four-episode origin story later in the first season, where a badly injured Zorro reminisces about how he became the hero. It's not bad and way more traditional than the unaired pilot, though some of the pilot's footage is used - including the hang glider!

Rating: Three out of five rapiers. 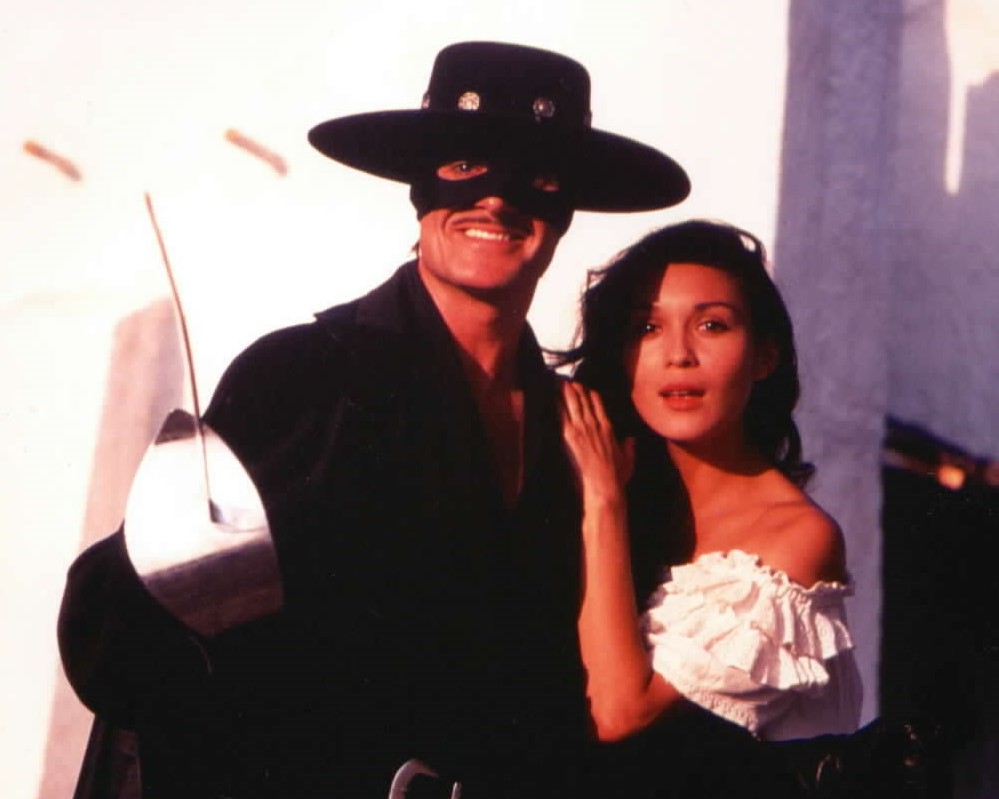