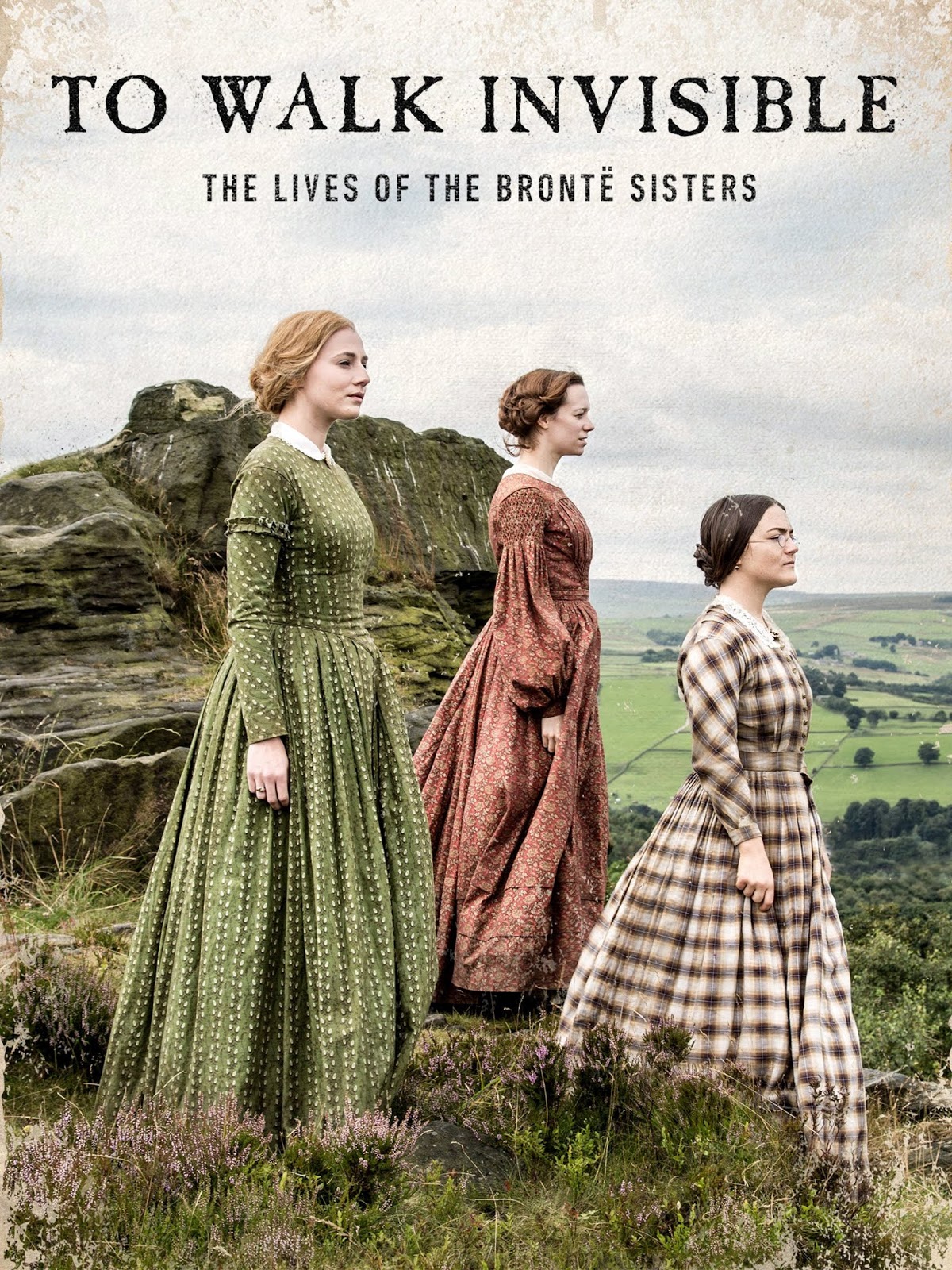 Who's in it?: Jonathan Pryce (Tomorrow Never Dies, Pirates of the Caribbean) plays the Brontë dad. I wasn't familiar with the other actors, but they're all amazing.

What's it about?: As Branwell Brontë slides into alcoholism and depression, his father and sisters grow concerned about the financial future of the family once Father dies. That's when oldest sister Charlotte starts thinking about publishing.

How is it?: I'm not normally crazy about biopics, but really wanted to see more about the Brontë siblings after reading Glass Town and Infernal Angria. It's possible to make a good biopic though, usually by focusing on one, crucial part of the subject's life and using it to summarize what the film wants to say about the person. I hoped To Walk Invisible (or just Walk Invisible, as it's sometimes called) would do that. And it does.
It opens with some cool shots of the Brontë children on the verge of inventing their Glass Town/Angria/Gondal world, but the film isn't about that. The childhood world they created says something about their creative spirits. And there's also some early mention of how addictive that world became, especially to Charlotte (Finn Atkins), as explored a lot in the Glass Town graphic novel. But To Walk Invisible is less concerned about the creative spirit itself than about what the siblings do with it.
In Branwell's (Adam Nagaitis) case, the answer is, "Not much." He attempts a trip to London to sell himself as an artist, but becomes overwhelmed by the idea and chickens out on the way there. Instead, he spends the time - and all of his money - getting drunk in a village along the road. (Infernal Angria relates this event, too.) Branwell's cowardice and other moral shortcomings send him into a spiral, which spells trouble for the rest of the family.
They're not particularly concerned about scandal. They're not wealthy or well-placed enough for that to be an issue. The problem is that Patrick Brontë, the family's patriarch, is an elderly, Anglican priest who owns no land nor the parish house that the family lives in. When he dies, according to English law and custom of the day, it will be Branwell's responsibility to support the sisters financially. But Branwell is both unwilling and unable to do that. Which sends eldest daughter Charlotte scrambling for ideas about how the sisters can support themselves.
I won't outline the whole story, but the short of it is that Emily (Chloe Pirrie) needs some convincing about Charlotte's publishing scheme while Anne (Charlie Murphy) is pretty game for it. Emily is angry and resentful about Branwell and the situation he's created, but she's not crazy about sharing her poetry, which is extremely personal to her. And that's a problem because Charlotte's plan is to publish a book of poetry written by all three sisters, but with Emily's as the foundation, because she's the best at it and there's no book without her. If the poetry collection is even moderately successful, Charlotte hopes to parlay it into a book deal where each sister can write her own novels.
So the film is a commentary on gender issues, but it's also about unconditional love (as the family tries to figure out the best way to help Branwell) and various commercial and personal motivations for creating art. The Walk Invisible title comes from Charlotte's plan to use masculine pseudonyms so that the authors' true gender is undetectable and so not an issue for publishers or readers. And I love Emily's suggestion (or maybe it's Anne's, I forget, but it sounds like an Emily idea) to make the gender of the pen-names ambiguous, but masculine-sounding. So Charlotte, Emily, and Anne become Currer, Ellis, and Acton Bell.
This all leads to my favorite moment of the film when Charlotte and Anne have to travel to London and reveal their true selves to their publisher in order to correct a misunderstanding with potentially catastrophic repercussions. I don't want to spoil it, but it's so good.
As is the rest of the film. It's all expertly crafted from the story and the acting to the photography and art design and a closing sequence that seems like it should be nothing, but is extremely emotional and powerful considering all that's come before. 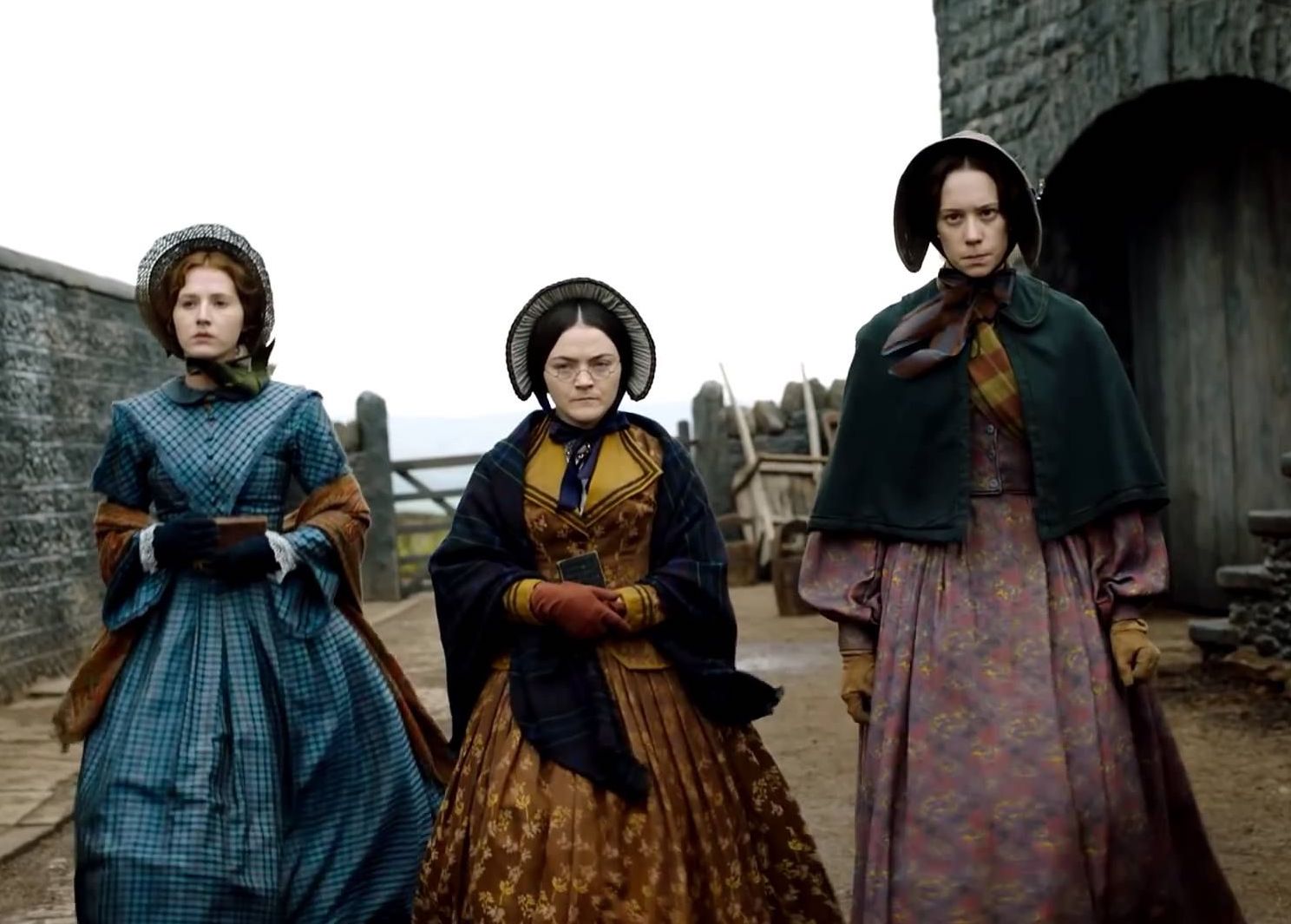